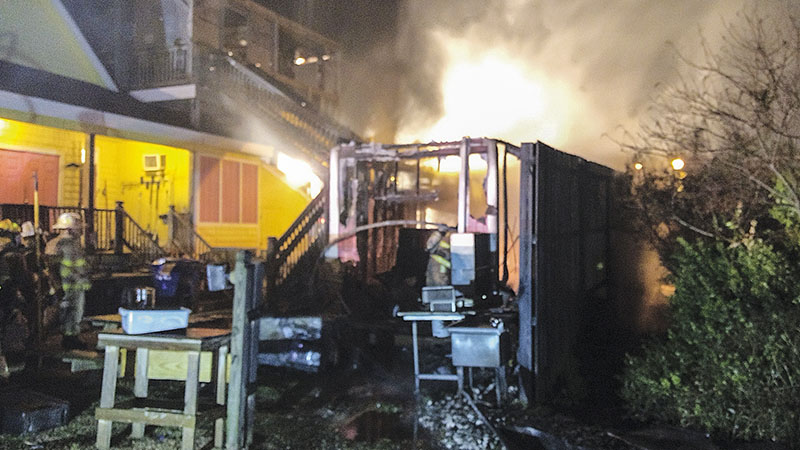 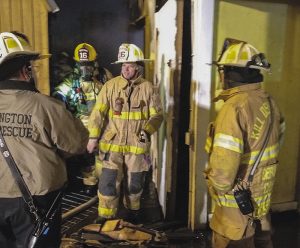 Responding to an 8:13 p.m. fire call at 4005 South Croatan Highway, firefighters spent more than three hours with winds in excess of 20 mph battling a March 20 fire that burned within a few feet of Mulligan’s Grille in Historic Cottage Row. 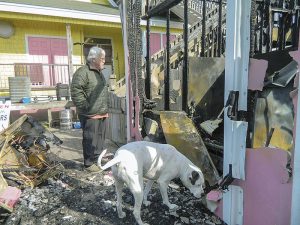 MULLIGAN’S Grille in Historic Cottage Row owner Gus Zinovis, with some help from Xerxes, checks out the two damaged storage sheds destroyed by a Tuesday night fire at his restaurant. Firefighters from Nags Head along with responders from five other departments extinguished the blaze and limited damages to the two storage buildings a few feet away from the main restaurant building. The restaurant was not damaged and reopened Thursday. (P.S. Ruckle Jr. photo)

According to Nags Head Fire Chief Kevin Zorc, on arrival a crew of firefighters from Douglas A. Remaley Fire Station 16 observed flames visible on the west side of the property where they found two storage buildings on fire.

“It was not the main structure,” advised Zorc. “Firefighters established a supply line and began to knock down some of those flames.”

Zorc said at some point there was a release of contents from some LP tanks in a storage shed which escalated the fire’s involvement.

The release also drew the attention of area residents with reports of an audible boom, likely the LP gas tank venting, heard more than a mile away at Outer Banks Hospital.

Zorc said as the crew successfully battled the increased involvement, the Incident Commander called for a second alarm to provide assistance for Nags Head Station 16 and Station 21 crews already at the scene.

“The police helped with traffic control,” said Zorc. “There was another significant event in that the by-pass had to be shut down when we ran a water supply in from the other side of the road. So there was a little bit of traffic impact as well.”

Zorc explained that there had been some property loss from the storage sheds and contents of the two buildings which was mainly catering equipment and supplies. No amount for damages has been determined yet. The losses are still being evaluated.

Although the blaze gutted two sheds on the south side of the main restaurant building, all the damage was confined to the sheds and stairs leading to a rooftop dining area.

“Mulligan’s main building was not damaged at all” said Zorc. “That was the big save. Fire crews worked diligently to keep the radiant heat off the main building.”

When asked about the impact high winds had on firefighting efforts, Zorc said “I think the wind certainly worked in our favor. It was a combination of efforts. Not only environmental, with the wind deflecting or pushing the radiant heat away from the main building, but it was the suppression efforts by firefighters that provided the major effect in suppressing the fire.”

Zorc went on to say he was sure that the entire structure was saved by the collaborative suppression efforts of all the fire departments working together.

“All of our emergency services forces dealt with all that very well and in a very efficient manner,” he continued. “As a result there were no injuries and I think the property loss was considerably light when you look at the scope of how bad it could have been. And we appreciate out partners coming out and helping us. “

Zorc said also that some of that help was for a couple of brush fires in the grass area south of Mulligan’s which were extinguished fairly quickly.

The fires at Mulligan’s, however, were not the only blazes that needed attention during the evening.

About an hour after the Nags Head fire started, at 9:24 p.m., members of the Roanoke Island Volunteer Fire Department had their own call.

Responding to a reported structure fire in the 1100 block of Driftwood Drive, firefighters on the island mobilized while the Roanoke Island truck and crew that had responded to the Nags Head fire returned from the Beach.

On arrival RIVFD firefighters determined that the fire, likely from overheated furnace heat strips, was extinguished. The furnace power was disconnected and the owner was advised to contact a technician for repairs before turning the power back on.

In Nags Head fire units were at the Mulligan’s Grille fire scene until 11:41 p.m. The cause of that fire is still undetermined and is being investigated by Nags Head Fire Department.

Although there was no damage to the main restaurant building, Mulligan’s was closed Wednesday and reopened Thursday.

“Everyone got out and everyone was safe but I thought we needed a day to reorganize,” said Mulligan’s owner Gus Zinovis.

Expressing gratitude for the work firefighters did in saving the main building, Zinovis said Nags Head town officials have already reached out to him.

It was not the only offer for help.

“Mike Kelly and every other caterer in town has offered to help,” continued Zinovis. “This is the beginning of our catering season and they said they are right there for us with supplies and equipment. Between that and every other restaurant offering to help, we’ve got a great community.”

Mulligan’s has operated at that location for 12 years.