The first ever prescribed burn at Jockey’s Ridge State Park took place Friday, March 23, and park officials have deemed the exercise a success. 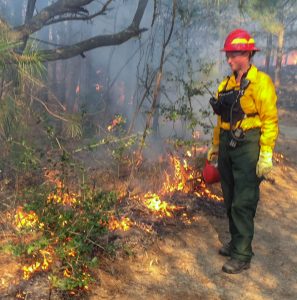 According to Park Superintendent Joy Greenwood all 25 acres of the park area slated for burning was burned in the afternoon event.

“We did burn all 25 acres,” said Greenwood. “Of course as with every burn there are some areas that burned well and others that did not.”

Greenwood said while some parts of the burn are ignited and burned completely, in other areas there were some pockets of unburned brush and grasses.

“It’s good to have both areas,” added Greenwood. “Both the patches of burned areas and unburned areas.”

Serving in part as a wildfire control technique, Greenwood said the exercise also poked holes in the overhead canopy to allow sunlight to filter in for some of the carnivorous plants there.

Carnivorous plants are a type of vegetation that has adapted to grow in soils thin or poor in nutrients by trapping insects and other arthropods, and grow better with more sunlight.

There were other benefits as well.

“Some people think a burn like this does a lot of damage,” explained Greenwood. “In reality fires can actually help some plants. It can make them stronger.”

After the recent fire at Mulligan’s just up the road a short distance, there was concern that any afternoon smoke spotted coming from the western edge of Jockey’s Ridge State Park might generate calls from area citizens concerned that there might be a problem. None were reported.

According to a memo from the Nags Head Fire Department, the prescribe burn was to take place on the west side of the park near the Soundside Road estuarine access and a park nature trail from noon until completed or the weather becomes unfavorable.

With the temperature in the mid 40s and a light northwest wind, officials decided it was a near perfect day for the burn.

“We could not ask for a better day,” commented Greenwood. “And the humidity was almost perfect.”

A notice sent out by Nags Head Fire Chief Kevin Zorc advised that the prescribed fire project at JRSP was completed as of 4:10 p.m. Friday.

There were no structures threatened and no reported injuries.

Officials on site for the prescribed burn were N.C. Forestry and Jockey’s Ridge State Park personnel.

Jockey’s Ridge State Park, one of the most visited state parks in North Carolina, is home to the tallest active sand dune system in the Eastern United States. The park was established after local resident Carolista Baum spearheaded a campaign in the early 1970s to save the sand dune from being bulldozed and its sand removed.

Greenwood said there are currently no other burns planned for the rest of this year.