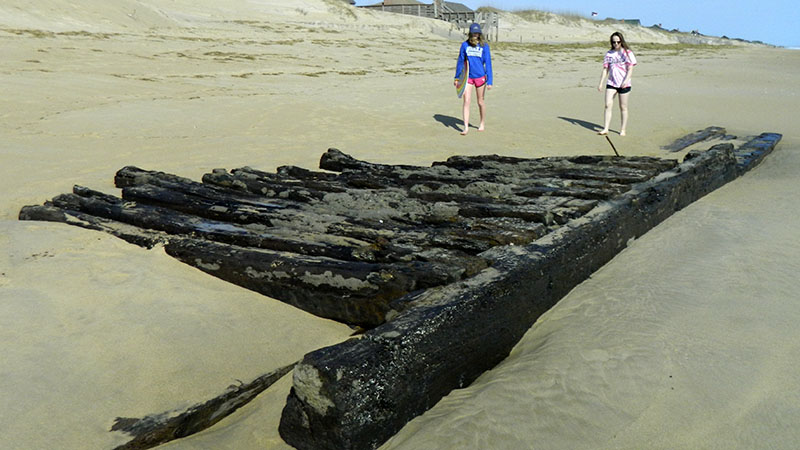 When Nags Head resident Brimage Silver went out for her regular morning walk Thursday, she and a few other early morning risers were surprised to find what appeared to be the partial remains of a ship washed up on the beach near her home.

Sticking up out of the sand a few feet away from the ocean and just a few yards from her home, a cottage built in 1885 by her great-great grandfather Captain Edward Ralph Outlaw Sr., Silver said the object was not there the day before.

“I walk that beach every day,” said Silver. “I would have seen it on my walk yesterday if it had been there.”

Silver said it’s hard to figure out what happened because it looks like part of the object is buried several inches or even feet into the sand, and another part is sticking up several inches above ground.

“It may have washed up overnight,” said Silver. “But it looks like it might be buried in the sand and was uncovered. With some parts sticking up 20 inches above the ground that means the beach had to drop two feet to uncover it.”

While it appeared to be a shipwreck, there was some initial speculation that it could actually be some type of building foundation.

“It could be parts of St. Andrews Chapel,” she continued. “Back in the Civil War soldiers took the Chapel apart and used the wood to build their camps.”

She went on to say if not the Chapel, it could even be the remains of the family cottage.

“Beach cottages were not always up on stilts,” she added. “And our cottage has been moved back five times. So it could be the remains of the cottage from an earlier time.”

Silver said while she was not the first one to find it, she thought she was the first to report it. After calling the Outer Banks History Center and National Park Service, she got in touch with Nags Head officials and Police Chief Kevin Brinkley met her on the beach for a look.

Her cousin, Gillam Hall, was another beach-goer in on the discovery. He contacted the State Archeology office and was told it’s a new shipwreck find, but it was not known what ship it might be.

During the discussion, the early 1900s was suggested as a likely era until Hall pointed out that the family cottage would have more or less been on top of it from early on. And, since the Outlaw Cottage has been said to have been moved back from the ocean five times, the ship would have been in the ground well before 1885.

“It is literally right where the cottage would have sat,” said Silver. “And family lore would have passed it down, had it been anytime since about 1850. Our great-great granddaddy Capt. E.R. Outlaw would have written about it upon the cottage walls. That’s where he logged remarkable events.”

According to Roberta Thuman, public information officer for Nags Head, the town has no immediate plans to do anything with the object.

Nags Head Public Works director Ralph Barile confirmed that saying also that the only two options are to leave it or move it.

“If we move it we have to keep it somewhere,” said Barile. “We really don’t have any place to keep it. If we leave it there we would bury it where it is.”

Barile said most likely it will be left where it is, although Marine Archives is usually on hand to take a look at it, measure it, catalog it and let the town know what can be done with it.

“We’ll at least wait to hear from them until after the weekend before we do anything,” said Barile.

Barile went on to say that while most people consider shipwrecks from the late 1800s or early 1900s to be old, he has found that Marine Archives does not agree.

“They’re looking for the ones the Lost Colony came over on,” he added.