Actions by the Nags Head Board of Commissioners at their Wednesday, April 4, meeting included the approval of a retail structure site plan, improvements for Dowdy Park, and recognition of service for several Town employees.

During a site plan review for construction of a Sherwin Williams retail structure at 6813 South Croatan Highway, Deputy Planning Director Kelly Wyatt explained that the one-story, 6,000 square foot structure will go on a vacant lot zoned C-2 as are other nearby properties. 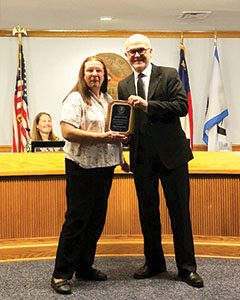 BARBARA MINTER, PUBLIC WORKS office assistant (left), was recognized for her 22 years of service to the town at the April 4 Nags Head Board of Commissioners meeting with a plaque presentation by Mayor Ben Cahoon. Minter was adept at handling multiple tasks such as preparing work orders and gathering data, while handling phone inquiries at the same time. (Town of Nags Head photo)

Plans submitted by Coastal Engineering on behalf of GemCap meet height and lot coverage guidelines with more than the required parking proposed. Plans call for dividing the building into two units with both initially used as retail but with the ability to convert one unit to another use at a future date.

After discussion on the condition of a driveway and the ability of Grouse Street to handle additional traffic, commissioners approved the site plan as presented with a modified landscape buffer change.

After concerns were voiced that additional restroom facilities might be needed on the east side of the park, Mayor Pro Tem Susie Walters pointed out that the Soundside Event Site and Walmart are both larger areas and each only have one bathroom.

Commissioner Renée Cahoon also asked that many of the small rocks at the park be removed. In response, Town Engineer David Ryan advised that the loose rock there was an inexpensive erosion control effort and would be removed.

Town Manager Cliff Ogburn was also asked to look into an agreement with the elementary school for overflow parking.

After discussion the board voted to approve the site-plan application with a note in the minutes on the need to maintain an area for a future restroom facility on the east side of the site.

Other board actions included service recognition for several town employees. 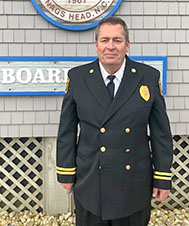 FIRE CAPTAIN JOHN HARRIS was honored at Nags Head’s April 4 Board of Commissioners meeting for 20 years with the town’s fire and rescue department. Town officials said through his years with the town, Harris has responded to numerous emergency responses, including multiple fires and several hurricanes. (Town of Nags Head photo)

At the end of employee recognition, Barbara Minter, who started in June 1996, was honored for 22 years of service and her retirement as an Public Works office assistant.

Board members also passed a proclamation designating April as Child Abuse Prevention Month, voted to stay with diesel as opposed to using natural gas for the Town Hall generator replacement, reappointed Kate Jones to another three-year planning board term, approved renewal of the memorandum of understanding with the Town of Kill Devil Hills for maintenance of the Eighth Street beach access, and agreed to delay action on a zoning ordinance for paper streets and setbacks when Ogburn advised that additional research was needed.

During public comments, Mike Kelly told the board there have been conversations with the Outer Banks Visitors Bureau about the future of the annual Kelly’s Parade; Mulligan’s Restaurant owner Constantine Zinovis thanked the town and its fire department for its response to a recent fire at the storage unit at his restaurant; Gary Oliver asked why the proposed beach re-nourishment project bids for 2018 were so high compared to 2019 and asked the board to consider nourishing the beaches this year if at all possible; and Marvin Demers said he feels the town would be better off to re-nourish the beach this year to allow it to be better lined up with the other towns down the road.

In a separate presentation Ann Daisey, Dare Soil and Water Conservation District community conservationist, advised that Earth Day is Sunday, April 22, and there are a number of activities scheduled to take place at Dowdy Park from 1 to 4 p.m. with tree plantings, education groups, and earth-friendly vendors.