‘As real as it gets’ 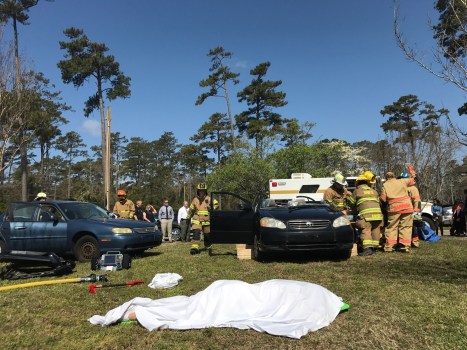 Getting real IN A REALISTIC scene complete with gore makeup and the sounds of crunching metal, Students Against Drunk Driving, along with emergency services workers and law-enforcement, re-enact the response to a fatal drunken driving accident outside Manteo High School.

No teenager has ever been hurt or killed in a prom-weekend car crash in Dare County, and authorities want to keep it that way.

As they have done every year for the last 15, Students Against Drunk Driving, along with the Dare County Sheriff’s Office, Dare County Emergency Services and the Roanoke Island Fire Department, staged a mock fatal car-crash in front of Manteo High School Friday morning, the eve of prom. The school’s juniors and seniors lined the sidewalk to watch.

The response was “as real as it gets,” said Manteo High’s school resource officer, Mark McKay.

Students played the roles of victims and suspects, dressed in prom finery and covered in fake blood and latex gore. Fire engines, ambulances and Dare Medflight swooped to the scene, which was staged as a fatality with others critically injured.

Senior Samantha Mejia acted as the victim who died, her white dress covered in blood. For most of the re-enactment, she lay under a white sheet on the grass while rescue workers busted out glass and cut through metal to pull her critically-injured friend from their mangled black car.

Meanwhile the teen “suspects” who hit them, drunken driver Marriah Maqueda and passenger Vaness Salazar, were put in handcuffs and taken off in a sheriff’s deputy SUV.

As the mediflight helicopter buzzed overhead, McKay urged students to be extra cautious this weekend.

“We’re trying to encourage you guys to make good decisions this weekend,” he said. “We don’t want to have to come out and do anything of this for y’all.”