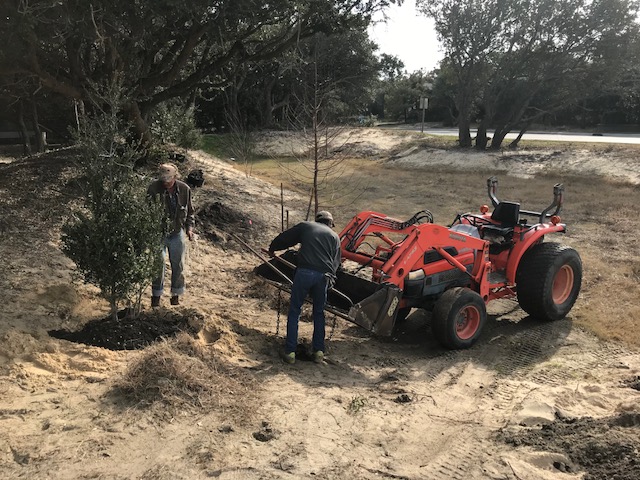 April showers often do bring May flowers, just like the 1157 poem by Thomas Tusser says, but this rainy season they will not be bring dangerous flooding conditions to a busy Southern Shores intersection.

Working together toward a problem solution, officials from the Town of Southern Shores and North Carolina Department of Transportation collaborated on a storm-water management project at the NC 12 and East Dogwood Trail intersection. The result has been to virtually eliminate a persistent flooding problem there.

“It was a much needed project,” said Malcolm K. Fearing, a former NCDOT Representative. “And from all indications it is working as designed. If you ever saw the road during a heavy rain, you would know it was dangerous.”

A collection point for water flowing downhill and eastward along East Dogwood Trail, part of NC 12 near that intersection often turned into a shallow lake during periods of heavy rain. Although it was not the only area that flooded, it was among the worst.

In addition to being a year round nuisance that often forced north bound vehicles into a game of chicken with south bound traffic, the area would also freeze in the winter creating another dangerous condition.

“The area has been a problem since back in the ’80s,” said Southern Shores Mayor Tom Bennett. “In heavy rain the fire department would pump water off the road onto nearby properties.”

As bad as flooding had been, in recent years the problem worsened.

One possible reason falls into the unintended consequence category. It is possible approved and permitted landscaping work rerouted the flow of water sending more to NC 12 than the surrounding soil could absorb.

As the severity of the problem increased during recent years, Bennett said there was a corresponding rise in the phone calls from concerned residents and visitors complaining about the problem.

While citizens were using public comment minutes at Town Council meetings to demand action, Town officials were already looking for a solution.

“People would ask us to do something,” said Bennett. “But the average person does not differentiate between state and town responsibilities.”

Because NC 12 is a state road, with about 12 to 15 feet of right-of-way on each side, the responsibility for road maintenance and repairs falls on the state, not Southern Shores. The Town does maintain the multi-use bike path running  parallel to NC 12.

Bennett said he and other Town officials knew it was important to get the state involved.

As it turned out, the state was already aware that there was a problem at that intersection, just not how serious the problem really was.

“They already knew it was a problem,” added Bennett. “They were just not aware that it had worsened.”

Through a combination of letters and photographs showing vehicles plowing through deep water and blocking oncoming traffic, other eyes were soon focused on the project.

“Our District I representative Malcolm Fearing was really a key,” explained Bennett. “He got the department secretary on site to see the problem first hand. It probably helped that it was right after a heavy rain.”

A review of the area confirmed that one of the toughest hurdles to clear was figuring out where to put the excess water. When you are already at sea level the options are limited.

One of the preferred solutions included using a vacant lot as a collection point for the unwanted storm-water runoff.

As it turned out, there was a long and narrow vacant lot at the intersection sitting next to NC 12 and across the street from the town’s east fire station on East Dogwood.

“This was the same as in other life events,” commented Bennett. “Was it fate, good fortune, or good luck that a vacant lot was there? Why was there a vacant lot right at the place we had to have?”

Of course just because there was a vacant lot nearby does not mean it would work as intended.

Bennett said one of the first steps was to have an engineer evaluate the property to assure that it would be adequate with a follow-up confirmation from NCDOT hydro people that it had enough surface area and was far enough above the water table for the intended purpose.

When the necessary evaluations were completed and the project given a green light, the Town of Southern Shores bought the property at what Bennett said was a reasonable rate of money.

Next step was to have RPC excavate the property creating a dry pond basin four to five feet deep.

“We saved as many trees as we could and still have room to capture water,” added Bennett.

Following the completion of a NC 12 resurfacing project a discharge pipe, providing the only inflow, was run under the roadway. Water now drains into that infiltration area where it is naturally absorbed into the ground.

End result has been that after several four to six inch rainfall events there has been no problem with the road or with the basin not being able to handle the water.

Although the original plan was to let the area grow naturally, after comments that the site was not attractive, some additional money went into landscaping.

Bennett said he thought the landscaping work turned out well. Jim Conners, prior to his election to Town Council, was recruited to help with landscaping design and Susan Evans at the County Agriculture Extension Agent office was contacted for additional advice.

According to Town Manager Peter Rascoe there were three bids for landscaping work that included planting river birch, bald cypress, yopon and wax myrtle with Central Garden Center and Nursery in Kitty Hawk the low bidder.

“The improvements are working as evidenced by the removal of highway-standing storm-water during two large rains,” said Rascoe.

Bennett said the addition of vegetation around the site will allow the area to look similar to landscaping around Southern Shores Crossing Shopping Center, the Southern Shores Police Department and in the middle of the U.S. 158 and NC 12 intersection.

“This was just like any transportation or capital project,” said Fearing. “It just took getting everybody on the right page and it was under Tom Bennett’s leadership that we were able to get it done. It was a good partnership between the Town of Southern Shores and the Department of Transportation.”

Bennett said there were others than NCDOT helping make things happen.

Also helpful were state Rep. Paul Tine and state Senator Bill Cooke who were involved in getting State money to help pay for the project.

Rascoe said the town’s total expense for the storm water improvement project was $423,264 which covered included site acquisition, engineering and design, and construction with NCDOT reimbursing Southern Shores $228,529 of that amount.

“It was one of those good things that just took a long time getting there,” said Fearing, “but we were finally able to make it happen.”

As successful as the project has been, Bennett said he would have done one thing different.

During heavy rainfall events storm-water collects on East Dogwood across from the east fire station. More of a nuisance than a hazard, Bennett said that area could use a drain.

“The primary concern was NC 12,” said Bennett. “If we had known about that spot when we designed the project we would have included a drain for the East Dogwood water. Not a critical issue, but something to think about.”

Thinking about the overall project Bennett said “I feel privileged to be involved with this project. There have been a couple of times as mayor I have been privileged to work with other agencies and governments to have positive things happen. This project was one of them.”