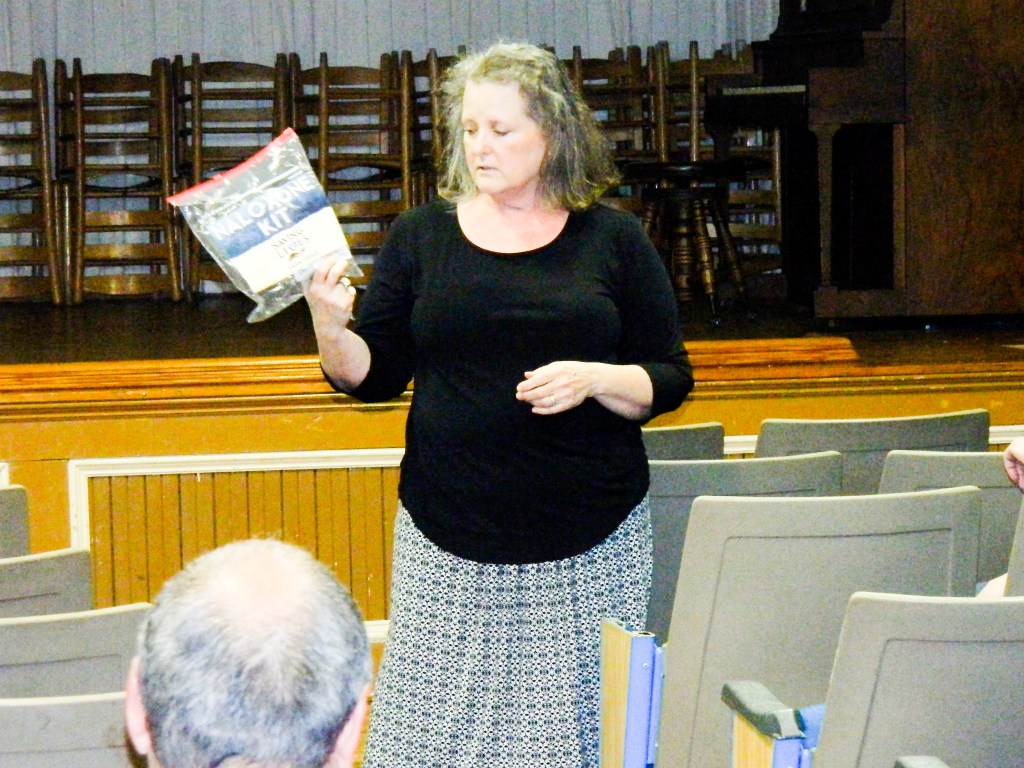 ROXANA BALLINGER, with the Dare County Department of Health and Human Services, advised a group at the April 25 Wanchese Community Center meeting that naloxone is provided free from the county. Naloxone is a medication designed to reverse opioid overdoses often providing some time for people who have suffered overdoses to get medical attention.   (P.S. Ruckle photo)

During a gathering in the Wanchese Community Center on Old School House Road, Dare County Sheriff J.D. “Doug” Doughtie stood in front of a small crowd April 25 to say that help is available.    After two April 16 drug overdoses within hours of each other at the same Wanchese address, one resulting in a death, Doughtie said it was time to reach out to the community with an opportunity to express any concerns and a chance to address any issues affecting the quality of life in the community similar to an October 2013 meeting.    “This is not like Facebook,” said Doughtie. “No disruptions. Everybody has an opinion and nobody is wrong. We’re just looking to see what the community feels is needed and try to provide some help.”    Doughtie advised the group that there was no specific agenda, that the session was set up to run from 4 to 7 p.m. to accommodate both those at home during the day and at work, families with T-ball players and anyone just passing through.    “This is a chance to see what can be done for the people in the community,” he added.    Doughtie didn’t wait long before pointing out that there were a number of people in the room representing a wide range of resources and all available to provide some type of support.    “There are a lot of people here,” said Doughtie. “And they care enough about you to be here, to listen and to try to help.”    Among them was Gina Elko, a retired firefighter, who encouraged an organic holistic approach.    Elko said cannabinoids have proved useful as a natural approach to health in treating a wide variety of illnesses and that her House of Hemp OBX at Seagate North Shopping Center in Kill Devil Hills carries only cannabidiol (CBD) based products.    Representing a more traditional approach, Dare Coalition Against Substance Abuse Director Amber Bodner Griffith assured everyone that treatment is available from both local and regional sources.    “We need to overcome the stigma that keeps us from asking for help,” said Griffith.     Dare CASA is a non-profit volunteer organization working to counter the impact of substance abuse with a focus on education, prevention, and providing information to the public.     Griffith went on to say that many are hurting from the loss of loved ones due to addiction and overdose. She encouraged anyone to contact Dare CASA, to reach out and ask for help. One program designed to provide help will be a May 24 event at Nags Head Elementary School to address youth mental health, technology, substance use, on-line harms and provide resources to help. The session runs from 6 to 8 p.m.    Another resource in the crowd was Saving Lives Task Force.     Roxana Ballinger, with the Dare County Department of Health and Human Services, advised that naloxone is free from the county.    Holding up a sample kit in a baggy, Ballinger likened the life-saving product to a first aid kit or fire extinguisher.    Naloxone is a medication designed to rapidly reverse opioid overdoses. It blocks the brain’s opioid receptors and restores normal breathing and often buys enough time to get medical attention for people who have suffered overdosed on fentanyl, heroin or prescription painkillers.     Also in the crowd were representatives from Trillium Health Resources a specialty health care manager for individuals with substance use, mental illness and intellectual/developmental disabilities in eastern North Carolina.    According to one representative, in an emergency Trillium will dispatch a specially trained mobile crisis team member to a location and provide transportation to a crisis center. Jails and hospitals are the only place to which the team does not respond.     “Wanchese has had a lot of attention,” continued Doughtie. “That’s not to say this is the only place we have been checking. And Dare County is not the only place affected by illegal drug use. Not long ago Pasquotank County had seven overdoses.”    Doughtie said you cannot just lock up everybody to make it stop.    That’s not to say there have not been arrests.    “Four or five years ago we said we were going to turn up the heat and that disrupted some people,” he added.    According to Doughtie, in 2015 there were 51 Wanchese arrests of which 13 were for drugs. In 2016 it was 45 arrests with 15 drug cases, 2017 saw 39 Wanchese arrests with 11 drug arrests. So far in 2018 there have been 12 arrests with two felony charges filed.     Compared with overall Dare County arrests Doughtie said in 2015 there were 1,030 drug charges with 245 arrests, in 2016 the 1,029 charges included 283 arrests, for 2017 the 941 charges included 209 drug arrests, and this year there have been 222 arrests with 43 drug related. That’s in addition to the towns and highway patrol actions.    Not a fan of every diversion program out there, Doughtie said he is in favor of helping people and doing the things that do work.    Doughtie said there is merit to holding the threat of jail over someone’s head to make sure they complete a program.    “I’m not here to preach church,” continued Doughtie, “but I can tell you that the Good Lord can help you.”    With at least three preachers in the crowd, Doughtie called two of them, Wanchese Assembly of God Pastor Mark Hinson and Source Church Pastor Frank Lassen, up front.     Thanking them for their support to the community Doughtie recounted how Lassen and Robert Flowers were observed walking the roadside looking for needles.    “These guys are there to help you,” Doughtie continued. “Don’t hesitate to call. If you call we will come.”    Doughtie encouraged local residents to seek out the people that came to help and talk to them.    With an assortment of literature available, everyone was also invited to the hot dogs, drinks and chips available.