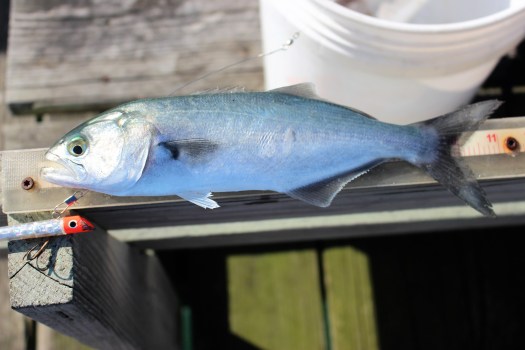 Bluefish feature deep blue and green colors on their backs. They seem to love Got – Cha plugs and one’s with fluorescent orange heads are essential for pier fishermen. (Photo by Daryl Law) 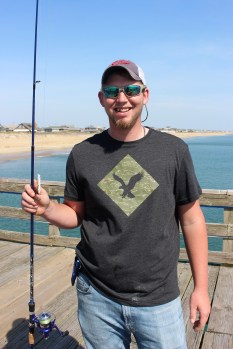 Dustin from Craig County had the hot hand and hot Got-Cha plug at Avalon Pier the other morning when the bluefish were biting. (Photo by Daryl Law) 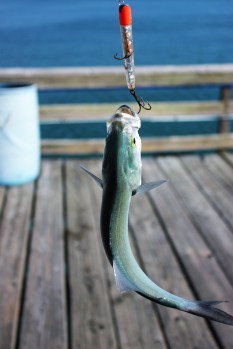 Most of the bluefish caught on the piers last week were about as big as this 11-incher and Got-Cha plus, left, were the best bait. (Photo by Daryl Law)

Finally had fun fishing – after two straight trips of nada, I recovered with the blues.

In fact, many anglers on the northern beaches also soaked up spring conditions last week that included sunny skies, little wind, pretty water and plenty of “snapper” bluefish. If you like pier fishing and jigging for blues, this was your week — the ocean water was clear, clean and green!

Fishermen at Jennette’s Pier used Got-Cha plugs and even a gold-medal Hopkins lure to haul in plenty of tasty-sized bluefish, which were either released or taken home for dinner. The bite started early Wednesday morning with a few of the guys catching some nice ones up to 15-inches or so.

Just after noon, off the end, again anglers enjoyed a decent run of the small to medium blues. At the same time, near the trough, a burrfish could be seen making its way along the textured bottom.

At the cleaning station later, a few anglers were seen knocking the sides off the fish to take home. Fileting is so much easier with a sharp knife. I like to scale them first with the back edge of the blade, then, cut an angle near its head to maximize on the meat and then slice away from my body.

Bag them up, ice them down and it’s a wrap. I kept the carcasses for crab bait. At home, Wanda used vegetable oil in her old jet-black cast iron skillet to cook the fish after she dredged them thru an egg wash and coated them in hush puppy mix. The small filets didn’t take long to cook or eat and my wife, kids and I were all happy.

The next day, Thursday morning at Avalon Pier, another set of fishermen and a few fisherwomen were also trying their luck for blues. Dustin from Craig County, Virginia was pulling in small blues from the sea with nearly every cast on his Got-Cha. He shared his catch with another angler who left with a big bag of filets.

Dustin, a carpenter, said he and his wife would love to live here but he’s not sure they can afford it. His situation is pretty good back home near Roanoke, so for now, they just visit three time a year, he said.

Next, a man hurried past heading for the end and he offered a snappy “Good morning!” His Got-Cha was white with a chartreuse head. Schools of small rays were hovering over the sandy bottom.

A few elderly gentlemen with UVA gear on were doing well close to the south side cleaning stations and they were having a great vacation in general. One was using a hot pink Got-Cha and he had it tied a certain way to maximize the action.

Turns out, they were from my home town and we knew a few of the same folks. They too, however, had moved away from home over the decades. They kept talking about eating seafood and Awful Arthurs is their go-to favorite. Each vacation, they also dine at Capt. George’s seafood buffet: “That’s what we come down for, to east seafood.”

On the north side of the pier, right near the beach, a large cow nose ray swimming south sensed the pilings and turned east to trace the pier. I can remember as a boy wondering why the big-time fishermen were always chasing large rays along the pier and then casting towards them.

“What would they do if they hooked that huge animal?” It wasn’t until much, much later I learned the cobia often swim with or beneath these graceful giants looking for food the rays stir up.

And I just heard some cobia have been spotted down south on Hatteras Island but that’s another story.

Daryl Law learned to relish fishing decades ago on Avalon Pier. A book, “Fishing’ Fun, A Treasury of Fishing Humor,” inspired his viewpoint on the sport.