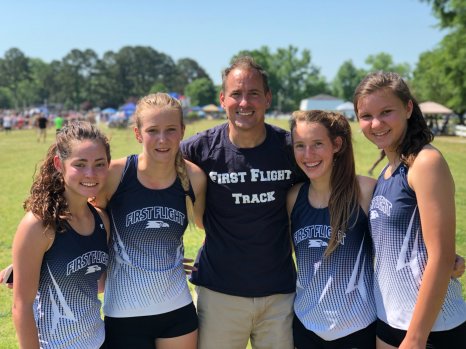 On a hot May 12 for the 2-A Track Regionals at University of Mount Olive the Kill Devil Hills girls 4x800 team (l-r) Jillian Hix, Maddie Wagner, head coach Chris Layton, Katie Gunzenhauser, and Jill O'Dell were seeded ninth, but cut a minute off their time to place fourth with a time of 10:59.80 and advance to Saturday's state meet. Currituck ladies placed third in the event less than a second ahead of the Nighthawks. (FFHS photo) 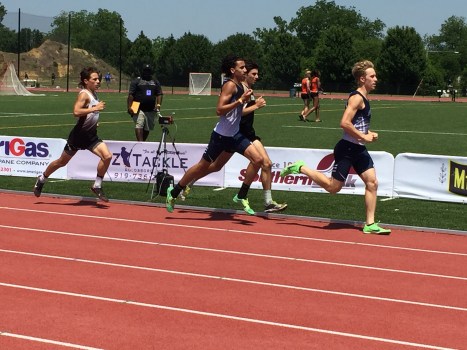 First Flight's Skylar Stultz (far right) leads in the boy's 1600 at the May 12 2-A Regional Track meet. Stultz won with a time of 4:24.74, seven seconds faster than his previous best time and a new school record. (FFHS photo) 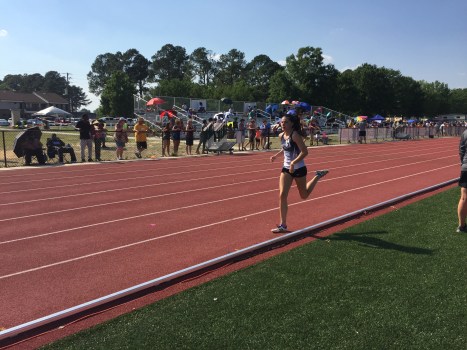 First Flight senior distance ace Alex Rodman was alone at the finish of the girl's 800-meter run winning the May 12 2-A Region championship with a 2:22.11. (FFHS photo)

In high school state playoff action on Friday, May 11, Manteo’s varsity softball team lost an away state playoff game against Camden County 2-1.
The First Flight girls varsity soccer team overpowered Whiteville 9-0 in a May 12 second round home playoff game and Currituck outlasted Trinity 3-1. First Flight is now 21-2-1 for the season and was scheduled to play the Richlands Wildcats (20-1-2) yesterday, Currituck improved to 18-4 overall and was to face Clinton Tuesday.
Manteo’s varsity soccer team was also a winner in Saturday’s home playoff game against Roxboro Community. Scoring once in each half of the game Manteo ended the game with a 2-1 victory. Manteo (now 14-4) is scheduled to play a third-round home game against East Carteret (10-12) later today at 5 p.m.
Also in the winner’s circle, the Manteo varsity baseball team defeated Voyager Academy 4-2. The Redskins were scheduled to take their 15-7 record to Falls Lake Academy for a third-round state-play-off game yesterday. The Firebirds are currently 18-3 overall.
The Manteo tennis doubles team was scheduled to play at the state finals in Cary May 11, but so far, no results have been posted.
In spite of the sun and heat that prevailed May 12 a number of area athletes posted outstanding performances at both the 1-A and 2-A regional track and field meets.
In 1-A East Regional competition at Snow Hill Manteo boys finished sixth among 21 teams followed by Cape Hatteras in ninth, Mattamuskeet in 12th, and Ocracoke tied for 19th with two other schools while Manteo girls were 16th and Cape Hatteras was 17th out of 18 girls teams.
According to Manteo coach Melissa Mann, Redskin senior Marcos Gomez ran an amazing 1600-meter race. Tripped with just 250 meters left to go Gomez was able to recover, got up, and sprinted to a 5:00.42 second place finish. Overcoming a different type difficulty, Tiffany Fenz pushed through her sickness breaking the Manteo school record in the 800-meter run with her third place 2:45.26.
Competition at the 2-A Track Regionals at University of Mount Olive saw First Flight’s Skylar Stultz cut seven seconds off his 1600-meter time establishing a new school record of 4:24.74. and help the Nighthawks finish fourth in the team standings. Currituck County finished 13th.
Taking a break from soccer, Alex Rodman was back on the track with the Nighthawks thin-clads to run the 800 where her first place 2:22.11 extended an unbeaten streak in the State of North Carolina for that event and helped First Flight finish 12th in the team standings. The win qualifies Rodman for this weekend’s state meet but if the Nighthawks soccer team are in the round four playoff game set for the same day Rodman will likely again choose that team over another victory lap around the track.
In the field event a first-place toss of 112-02 by Destiny Ferebee in the Girls Discus Throw helped her Currituck County team finish in a three-way tie for seventh place.
The 2018 NCHSAA State Meet Championship are scheduled for this weekend at NC A&T State University in Greensboro with 1A and 3A team on Friday, May 18, followed by 2A and 4A on Saturday, May 19. Field Events start at 10 a.m. and admission is $10.
Other area 2-A qualifiers for the boys state meet include:
Zach Hughes (FFHS) 1st in the 3200 at 10:06.33 and 3rd in the 400 at 50.60.
Skylar Stultz (FFHS) 2nd in the 800 at 1:58.0.
Joseph Davidson (FFHS) 4th in the 1600 at 4:40.74.
First Flight boys 2nd place 1600 relay of Henry Stecher, Cole Tomlin, Zach Hughes and Skylar Stultz 3:31.14.