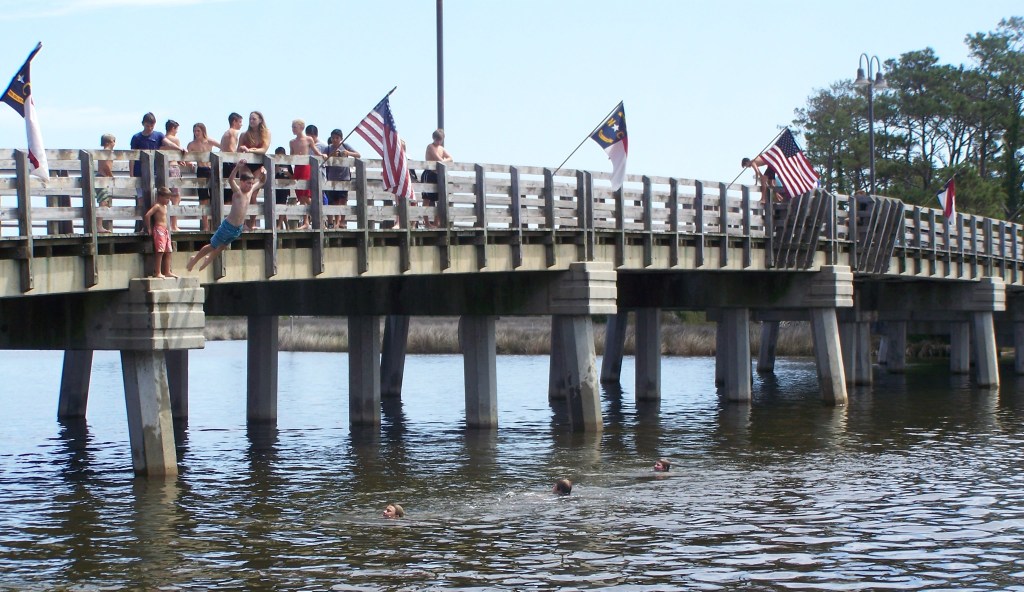 It’s unsanctioned, but an annual rite of passage for youngsters at Dare Day – leaping off the Cora Mae Basnight Bridge into the bay. By Gregory Clark

In Manteo, the season doesn’t begin until Dare Day.

The annual street festival began Saturday morning with a “blessing of the season” marking the unofficial beginning of the Outer Banks busy tourist months.

Large crowds leisurely strolled beneath the hot sun through the downtown streets. They stopped at the multitude of vendor booths offering a wide selection of food and beverages. Others filled their bags with crafts and trinkets.

The sounds of nonstop music filled the air. Musical groups performed on two stages. There were train rides, boat rides and amusement rides for the kids. Some gathered on the boardwalk to watch as local teens jumped and dove from the Cora Mae Basnight Bridge into the cool waters of Shallowbag Bay. Although unsanctioned, the daring leaps by the town’s youth has become an annual rite of passage.

Each year a Manteo and Dare County Citizen of the Year are named. This year’s recipients received replicas of historic boats in a bottle. Betty Alice Mann, the Manteo Citizen of the Year, proudly showed off her recreation of the Hattie Creef, a boat that once delivered mail, freight and passengers to Manteo.

Jack Shea was named Dare County Citizen of the Year. The Dare County commissioner was unable to attend and received his presentation at his board meeting the following day. Nadine Daniels and Kermit Skinner both were honored with appreciation awards. Daniels was recognized for her 10 years of work on the Manteo special events committee and Skinner for his leadership as Manteo town manager.

Town officials say this year’s Dare Day, the 43rd annual, was one of the best. Attendance was high and the event ran smoothly.