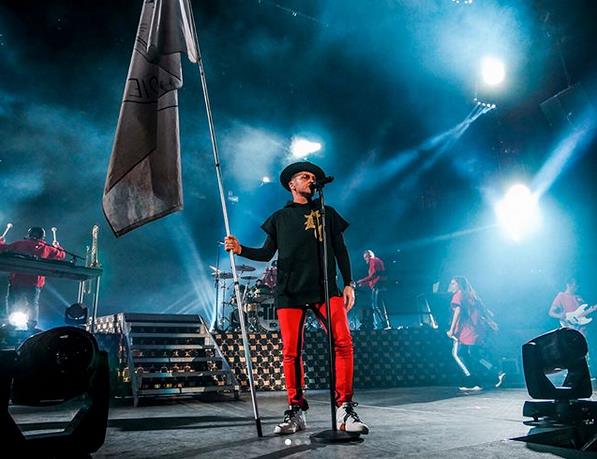 Changing lives one song at a time, the local non-profit group His Generation continues to pull off the near impossible.

Starting off with its first event in 2015, the group has been bringing top name Christian artists to the Outer Banks.

“There were people that said it would never work,” said His Generation President Matt Meekins. “Then there were others that jumped in to help make it event happen.”

Working with an all-volunteer 10-member board, Meekins and crew are the driving force behind the appearance of recording artist TobyMac and the American contemporary Christian music group NewSong at Roanoke Island Festival Park in Manteo on June 27.

Considered by some to be among the pick of the crop, TobyMac and NewSong have sold millions of albums, garnered a number of different music-related awards and consistently top the Christian music charts. Wednesday’s concert is just another in a string of performances by Christian music artists here the Outer Banks.

Meekins credits his attendance at a Christian concert in Raleigh as an event that sparked it all. It was also one that changed his life.

Already a local rock-and-roll musician, Meekins had his own band and even toured up and down the East Coast. Recruited to do security for Jesus Culture, a Christian youth outreach ministry, Meekins said he was at first critical of the event and wondered how good a Christian concert could be and who would come.

Before long, however, he was impressed by the talent of the group.

“I was blown away by the music talent,” said Meekins. “And then I was hit by the message.”

Seeking more about the Christian life led him to give his life to Christ. Returning home to the Outer Banks, Meekins met with a friend, Bud Elkins, and while relating the Raleigh experience the two wondered why they couldn’t have similar concerts here on the Outer Banks. Deciding it was something that could be done, the two co-founded His Generation to do just that.

“Our primary aim is to hold at least one evening of quality entertainment each year at Roanoke Island Festival Park or similar venue,” Marik said. “Along the way we want to provide encouragement to the younger set and minister to the needs of our friends and neighbors.”

Meeting monthly, and more frequently as an event draws near, board members are joined by more than a dozen additional volunteers from various businesses, churches and schools in working out the details required to host an event. By the day of the event the number of volunteers skyrockets to more than 100.

“Nobody makes a dollar off of these events,” added Meekins. “It’s a hundred percent volunteer effort.”

Meekins and Marik both stressed that all the profits from each event go back into producing another event, often bigger than the one before it.

“All our proceeds are invested in our next project and activities related to it,” said Marik. “We do have some merchandise, like His Generation hats and shirts which are popular, and we rely on the contributions of several businesses who continue to contribute to our non-profit each year. It is our hope to seek out corporate sponsors in the upcoming year to help with these donations, but we have found the Outer Banks community to be generous and excited about this project and to working to help sustain it.”

Meekins said after hosting Jesus Culture as the first group, he proved again that was no fluke when Crowder appeared at a highly-successful event in June 2016. In spite of previous successes, he was again told he it couldn’t be done when he invited For King and Country for a 2017 concert.

Not one to back down from a challenge, Meekins and crew not only brought in For King and Country, but more than 2,000 people attended the event that also featured We Are Messengers.

Watching ticket sales improve with every event, Marik said she expects the June 27 TobyMac and NewSong concert at Roanoke Island Festival Park to be a sell-out event.

“Our plan it to have, at minimum, one event each year at Roanoke Island Festival Park or a similar venue,” Marik said. “Ideally, we would like to have a second event each year at some other location. We are striving to unite our community in a unique way, not indigenous to one denomination or organization, but rather in a way that allows all groups to come together.”

Marik said the long-term goal is to be a source for the lost and broken members of the community, to reach those who may not attend church or other gatherings but might be reached through events where nationally recognized recording artists are the draw.

While people may come to hear the music, there are other community organizations ready to step in and minister to the needy. Groups like Fellowship of Christian Athletes, Christian Surfers, Dare and Teen Challenge, and several faith-based youth groups like Cross Trail Outfitters have participated with His Generation for its events.

“When families come to one of our events, they can be assured of an evening of quality entertainment that reaches across generations,” said Marik. “The youth in our community are encouraged to volunteer and participate, reaching out to peers they may not encounter within their school, community or church. Our long-term vision is one of unity in our community, where we are encouraging our young people to minister to the needs of their friends and neighbors, regardless of their background.

It’s also an event where alcohol is not served.

According to Marik fund-raising starts each spring with an annual golf tournament at Nags Head Golf Links. Other efforts include speaking at various youth groups, attending local events like Dare Day, the Elizabethan Gardens Easter Eggstravaganza, and The Ark Skate Night where board members can meet local families and hand out information about upcoming events.

“We generally plan our events for the summer season,” Marik added. “That way we hope to draw additional revenue for local businesses, but also to minister to our local families when they are out of school.”

Working toward benefiting the citizens of the Outer Banks, Marik said His Generation reached out to families looking for wholesome entertainment and safe place where their children of all ages can come and enjoy fellowship.

“We have enjoyed watching the generations of families come together,” Marik added. “At an event that they all walk away from feeling good about.”