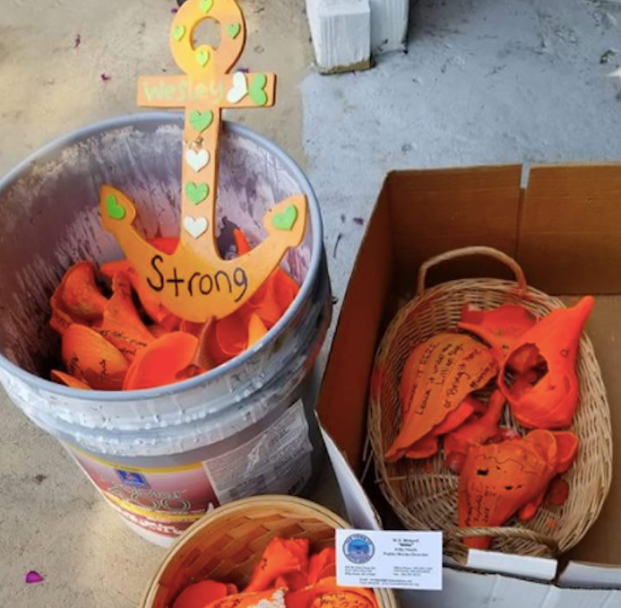 Orange shells and an anchor were returned to the Town of Kitty Hawk this weekend.

The orange seashells and small anchor in honor of Wesley Belisle have been returned.

The items vanished last week from their spot at the Little Red Mailbox erected at the Lillian Street beach access in Kitty Hawk.

Deborah Mennicucci, the mailbox keeper, said Kitty Hawk public works found the shells and anchor at the flagpole on Saturday morning and returned them to her house. She planned to bring them back to the beach access this morning.

The shells were there for people to write messages as an ongoing show of support to the family of the little boy, who was swept out to sea in April and drowned.

Mennicucci and her family supplied the shells for the messages. Wesley’s parents sent the anchor, in Wesley’s favorite color: Orange.

After the items disappeared, Wesley’s mom sent a message via Facebook: “As Wesley’s mom, I know Wesley would be sad. But my sweet boy loved to share with any and every one. I can see him saying, ‘mama, someone else needed it more.’ I’m trying to be positive but this really breaks my already broken heart.”

“Thank you for doing the right thing and returning the stuff you took,” she wrote.