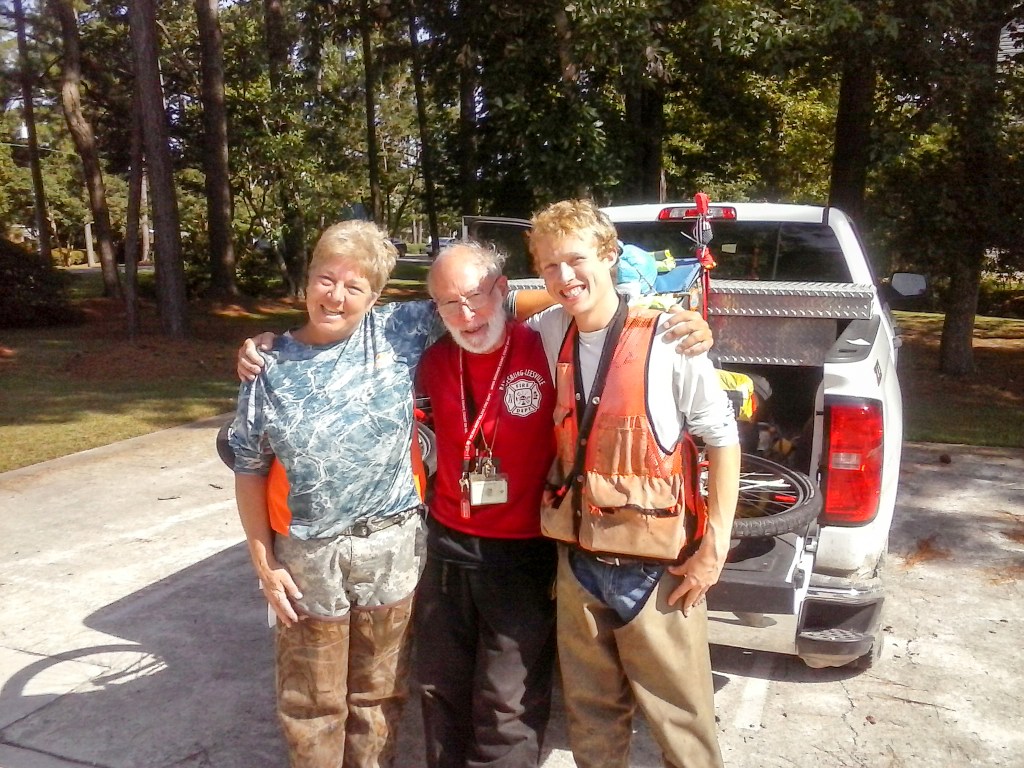 Bicycling across the country a 75-year-old volunteer firefighter from Lancaster, Pennsylvania, and former journalist in Miami, Florida, made a recent overnight stop at Roanoke Island Volunteer Fire Department in Manteo.

After 30 years of hard news reporting for the Miami Herald, William Minor said he has given up chasing news stories and now spends his time tracking weather patterns by bicycle.

Back home in Pennsylvania, he said, he lives a plain and simple life with the Amish. But Minor said most of his time today is on his bicycle negotiating roads all across the country studying weather patterns.

Like all his trips, much of Minor’s journey is determined by the weather. Convinced that today’s weather patterns are influenced by Hurricane Matthew, for the past two years Minor has been back-tracking the hurricane’s path.

Calling Hurricane Matthew the precursor to all our current weather patterns, Minor said he has peddled his way around the East Coast gathering information while following Matthew’s path. Quick to point out that he is not a weatherman, Minor said he is a researcher.

“I am not a-sky-is-falling kind of person,” said Minor, “but we are in a season of cycles and we need to follow through on it.”

Minor said he monitors air and ground temperature as well as the pH of the soil as he slowly makes his way along the highways and byways of the East Coast. Loaded down with a stack of maps and charts, he also makes extensive notes of current cloud patterns.

Hauling more than just maps and charts, Minor’s bicycle and small trailer are loaded with everything he needs including some basic weather tracking tools and several pounds of water bottles.

Originally planning on a visit to Swan Quarter, a chance encounter cycling along US 64 just east of Columbia brought Minor to Manteo.

That’s where there was a too-close-for-comfort encounter with a large truck. It was not long after that biologist Jan Goodson, conducting woodpecker research at Palmetto-Peartree Preserve near the Little Alligator River in Tyrrell County, spotted Minor and stopped to help.

Goodson said she and Austin Mueller, a college intern from NC State, had just finished their work for the day and were headed back to their office in Southern Pines when Minor waved them down and asked for directions to a nearby fire station. Some very bright sunshine, temperature in the high 80s, and an abundance of weekend traffic helped Goodson decided to transport Minor and gear across the Alligator River all the way to Manteo.

Minor said he typically checks with a state trooper or other law enforcement official to find a local fire station and make contact the fire chief to see if he can stay at the station when he reaches the town.

Minor said also that he does not consider fire stations to be hotels and makes every effort to stay out of the way. He does, however, spend time cleaning the stations where he stays.

A volunteer himself and an honorary member of about 40 fire departments, places he calls vital to the fabric of America, Minor proudly produced a handful of fire station patches from departments he said have welcomed him along the way.

In addition to studying the weather and its patterns, Minor said he is trying to help raise awareness of volunteer fire departments.

With journalism behind him, Minor said he is now a weather tracker and has been studying regional weather patterns for several years.

A Google search for “William Minor weather tracker” pulls up numerous articles documenting his presence in all parts of the country as far back as 2010.

“I don’t compete with the weather people. As a journalist and writer I do three things: to document, to educate and to inform,” he said. “That’s who I am. I am not a weatherman but a journalist so what you are getting from me is research,” he said. “We fail because we don’t pay attention to history.”

Rattling off a quick history of the weather service, Minor slows long enough to point out that we had better forecasting 40 years ago using almanacs than we do today with all the electronics available.

“There were only two weather satellites 40 years ago,” he said. “Now there are 19-plus satellites. Many years ago, we had better forecasting because we used almanacs. People paid attention to things going on around them and they observed the weather.”

When asked what he’s doing with all his research, Minor explained that he plans to eventually write a memoir of his travels and interactions with firefighters, who all over the country have welcomed him with open arms, with another about the weather.

He went on to say that weather is cyclical and natural occurrences, like earthquakes, can be charted and connected.

“The earth is in for a major weather cycle,” he added, although without any details on what that might include.

Showing no signs of slowing down Minor travels the country by bicycle loaded with all of his essential belongings necessary to see and experience the weather changes around him.

After a one-night stay Jones helped cart Minor’s bicycle and other equipment across Oregon Inlet in order for him to make the 3:34 ferry to Swan Quarter.

Minor said he appreciated the stay and a chance to wash some clothes. He also appreciated a home-cooked meal provided by one member’s family as opposed to one of his MREs (Meal, Ready-to-Eat).

Jones said on the way to Hatteras the conversation centered on the jet stream and a cloud formation that is following the shoreline. There was also talk of Fire Chief Alan Brunacini, also known as Chief Bruno.

During his years as a hard news journalist, and then as a weather tracker, Minor said over the years he has had interactions with many other famous people.

As a journalist he said he covered Richard Nixon and the Watergate trail, in the 1970s he spent several days with the world famous French explorer, conservationist, filmmaker, scientist, author and researcher Jacques-Yves Cousteau. He also covered the December 1972 Eastern Airlines Flight 401 crash that resulted in 101 fatalities while 75 passengers and crew survived. It was in the Everglades that he became captivated by firefighters because of the mindset and work ethic.

When asked what was next for him or where he might go next, he quickly changed the subject back to weather patterns and ocean currents. He said people would have to wait for his books to get that answer.

“A good journalist will never reveal his sources,” he said.