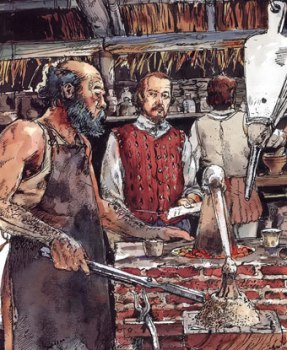 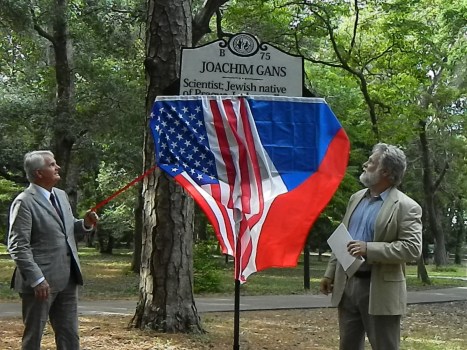 The Honorable Stephen B. King, US Ambassador to the Czech Republic, (left) uncovers a replica of a highway historical marker honoring Joachim Gans during a July 27 ceremony, with Brent Lane, economic futures strategist with the Kenan-Flagler Business School at the University of North Carolina at Chapel Hill. Gans was a noted metallurgist from Prague and the first Jewish person to set foot on Roanoke Island. Philip S. Ruckle Jr. photo

Standing on a temporary stage within sight of the world-famous Lost Colony Theatre on Roanoke Island, public officials paid tribute July 27 to a key player in efforts by Sir Walter Raleigh to colonize the New World.

The man of honor was Joachim Gans, a noted metallurgist born in Prague, who was one of the 108 men Raleigh sent to the New World in 1585, two years before the arrival of the group of colonists who later mysteriously disappeared, and 35 years before Pilgrims landed in New England.

“We are here to commemorate a special time, a special place, and a special person,” said U.S. Ambassador to the Czech Republic Stephen B. King.

Gans was born to Jewish parents in Prague, which at the time was part of the Ottoman Empire and declared its independence as Czechoslovakia in 1918 and is now the capitol of the Czech Republic.

King explained that history now acknowledges Gans was the first Jewish person to set foot in the New World. He is also the first person of Czech decent known to visit North America.

According to Brent Lane, economic futures strategist with the Kenan-Flagler Business School at the University of North Carolina at Chapel Hill, Gans was included in Raleigh’s 1585 expedition aboard one of Sir Walter Raleigh’s ships under the command of Sir Richard Grenville.

Lane said about half the colony were military or security detail members there to establish a military colony, about a quarter were relatives of investors, and the other 25 percent were researchers charged with locating any riches the New World might have.

“Joachim Gans was probably the most important member in that colony,” said Lane. “Because it was the credibility of Joachim Gans that enabled Raleigh to raise the money for this for-profit venture we call the Roanoke Colony. Gans had come to England from Prague to help England straighten out its struggling copper and metal industry.”

Among the most dramatic scientific achievements for Gans was to develop a way to reduce the time needed to purify copper ore batches from 16 weeks to just four days. Within two to three years, Gans was able to turn England’s industry around.

“Raleigh had to convince his investors that it was worth their while to do so,” continued Lane. “In order to do that he needed a credible source. To fill that role, he needed scientists. Not just any scientist, he needed the best.”

A primary objective of the colony was to locate and identify any valuable metals for investors and the Queen.

Lane went on to say, however, he found it interesting they didn’t just test metals here. That had been done elsewhere.

“They set up a science center here,” Lane added. “While it was a very modest facility, it was the base of operation for a whole spectrum of a scientific program.”

The work included celestial observations, ethnographic studies of the native population, chemical analysis of the plants and minerals in the area, and drew accurate maps of the area. Gans is considered the first technologist or material scientist in English America.

“All that information was compiled right over here,” said Lane. “When I grew up I knew the story of Virginia Dare. I did not realize our heritage as North Carolinians is science.”

Supporting that position was J. Eric Deetz, a lecturer at the University of North Carolina at Chapel Hill Department of Anthropology who has a special interest in English colonial archeology and has conducted considerable work at Jamestown.

“I feel like today we are looking at Joachim Gans as one of the giants in history. We don’t read much about Gans, but as Brent pointed out there was a big reason why this all happened here.”

Deetz said a goal is to fill in some of the blanks in knowledge. He cautioned, however, that in the shallow soil of the area a lot of history could be wiped out in one shovel stroke. He added it was important to note the quality of work that had been done in the Fort Raleigh area by researchers and the Park Service.

“As historians we can place Joachim Gans here on Roanoke Island,” Deetz explained. “As archaeologists we can place Gans right over there next to that oak tree.”

Deetz said also that it has been through careful excavation that items were found more related to scientific testing than domestic living.

Archaeologists plan to conduct additional work at the science center location on the Fort Raleigh National Historic Site property with the hope of uncovering additional evidence of the work Gans conducted there.

During the closing moments of the ceremony Lane and King uncovered a replica of a highway historical marker to be placed later this year along U.S. Highway 64 near the entrance to Fort Raleigh.

It was noted during the ceremony that this year, 2018, marks one hundred years of bilateral relations between the United States and the Czech Republic.