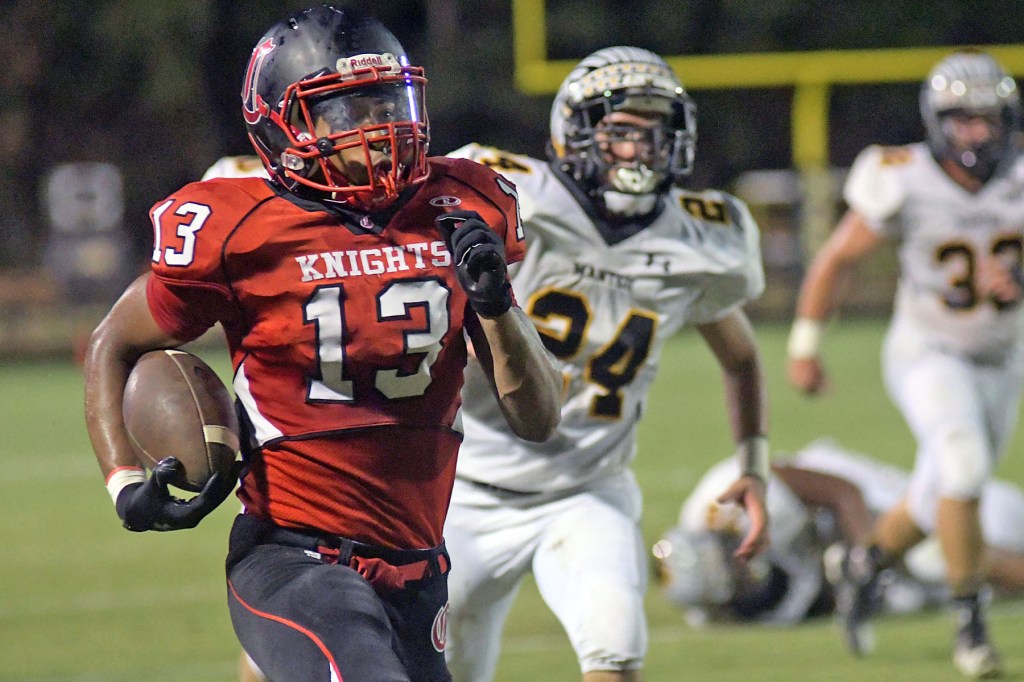 Currituck County High School junior running back Jayden Calloway heads to the end zone on the way to his second touchdown of the first half in a twice suspended season opening game against Manteo High School. The Knights secured their win 14-0 Monday evening against the visiting Redskins.  Currituck (1-0) will travel to Camden Friday to face the Bears (0-1) while Manteo (0-1) is on the road for a 7 p.m. kickoff with Columbia (0-1). Photo by Wright Emory

Originally scheduled to be played Aug. 17 at Barco, an official time-out halted play with four minutes left in the first quarter when it was discovered two light towers near the visiting team stands were not operating.

The problem was attributed to a lightning strike and a 30-minute delay turned into a postponement with the remainder of the scoreless game set for Saturday night at Manteo High School.

Playing the remainder of the first quarter and all of the second at Manteo, the Knights scored twice, the second touchdown with just four seconds left on the clock, followed by two 2-point conversions to give Currituck a 14-0 lead.

An approaching thunder storm complete with lightening brought a heavy downpour with it during the halftime break. The rain caused another delay followed by yet a second postponement. Officials rescheduled the final 24 minutes of the game for Monday and moved it back to Currituck.

Monday’s action proved to be a defensive game. Although Manteo maintained control of the ball during most of the game the Redskins were unable to overcome a stiff Currituck defense.

A Manteo pass intercepted with two minutes to play killed one Redskin drive and the Knights held on for the win.

Monday’s win gives Currituck a 1-0 record with the Knights scheduled to play Camden (0-1) this Friday. Manteo, now 0-1, will be at Columbia. The Wildcats lost their away non-conference game against Rocky Mount Preparatory Friday by a score of 22-14.