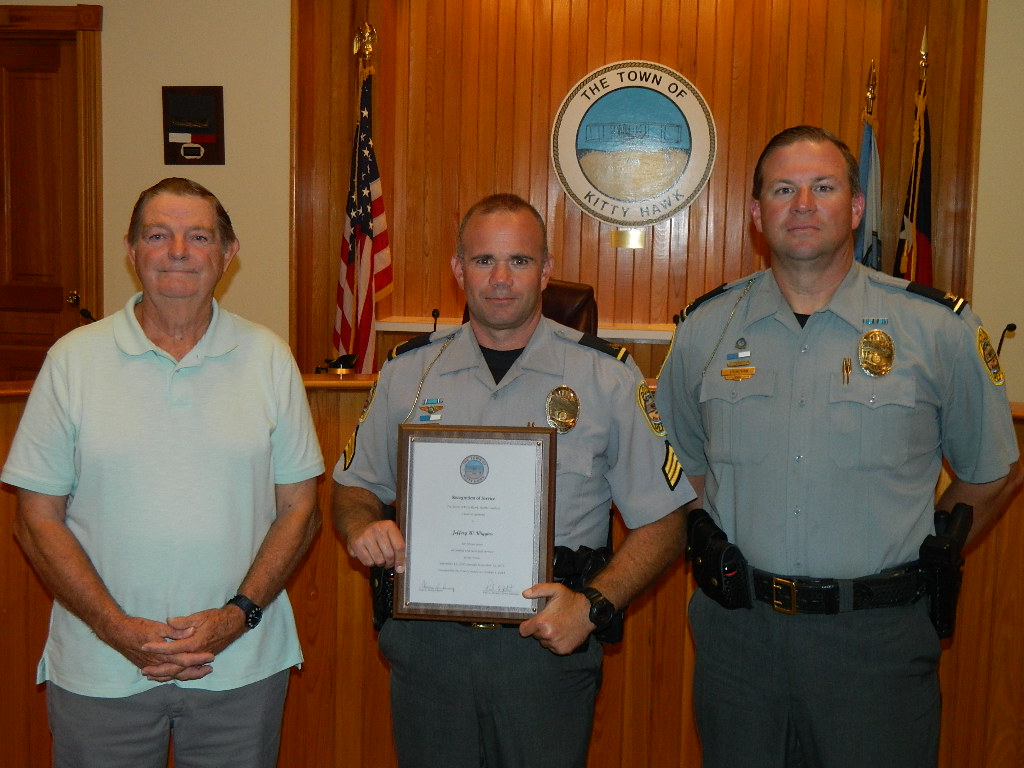 Kitty Hawk Town Council members opened their October 1 meeting with a few brief comments and a plaque presentation to Kitty Hawk Police Sgt. Jeffrey W. Wiggins in recognition of completing 15 years of service with the town.

According to Police Chief Joel C. Johnson, Wiggins has been a very proactive and hands-on member of the department. A Manteo High School graduate, he joined the force in September 2003 after serving four years with another agency.

In a move aimed at limiting future zoning complaints, council voted have town staff update all official zoning maps with a statement on the map that “town owned or leased facilities are a permitted use by right in all zoning districts.”

After completing a Putter Lane property swap transaction earlier this year, council was then faced with how best to update the zoning for the properties involved. An earlier simple rezoning attempt to change the four lots from Beach Residential to Emergency Medical and Government Services was tabled after concerns surfaced that it might be an illegal spot zoning action. The four residential lots are for a future fire station and were part of a land swap agreement earlier this year with Putter Lane OBX, LLC.

Spot zoning, designating a specific parcel of land within a larger area with a classification that is at odds with a master land use plan for the immediate area around it, have frequently been ruled invalid, as would any other use that is not compatible with the town’s land use plan.

Last month, council asked if creating a new zoning district, one just for government use, might be the answer.

Planning Director Rob Testerman said he found that North Carolina does allow spot zoning in cases where the town can show that it is “reasonable.”

Testerman said also that town staff reached out to David Owens, a public law and government professor at UNC School of Government in Chapel Hill, to see if creating a new zoning district strictly for governmental use would classify as an illegal spot zoning. The response was that while the concept might be legal, such a use is generally on large blocks of land used for a governmental complex and not typically applied to smaller tracts of land throughout the locality. A statement on the zoning map was offered as a potentially more efficient option for alerting adjacent property owners and future buyers that a government structure could be built there.

“It looks like spot zoning is not the best way to go,” explained Perry. “If a potential buyer is in fact researching their zoning district, by having that kind of statement on the map it would make them aware. We want to make sure future council do not encounter what we encountered with the property we own on 158.”

In other business, a consent agenda was approved with September 4 council minutes, a $4,500 increase to the original budget allocated for the audit and actuaries account, $17,500 for the additional nearshore bathymetric survey approved in September and a resolution establishing 2019 Town Council meeting dates as the first Monday of each month except for Monday, September 9.

During departmental reports it was mentioned that there had been a decrease in the number of US158/NC12 accidents and there appears there was less traffic. Although it’s been a busy season for the fire department with a 25 percent increase in calls, there were fewer structure fires. It was also pointed out that recent ditch and canal work made a big difference in recent rainfall drainage.

A request for money to place wreaths on graves at Austin Cemetery failed to gain any support since it is not open to the public.

The next Kitty Hawk town council meeting is set for Monday, November 5 at 6 p.m. at 101 Veterans Memorial Drive.