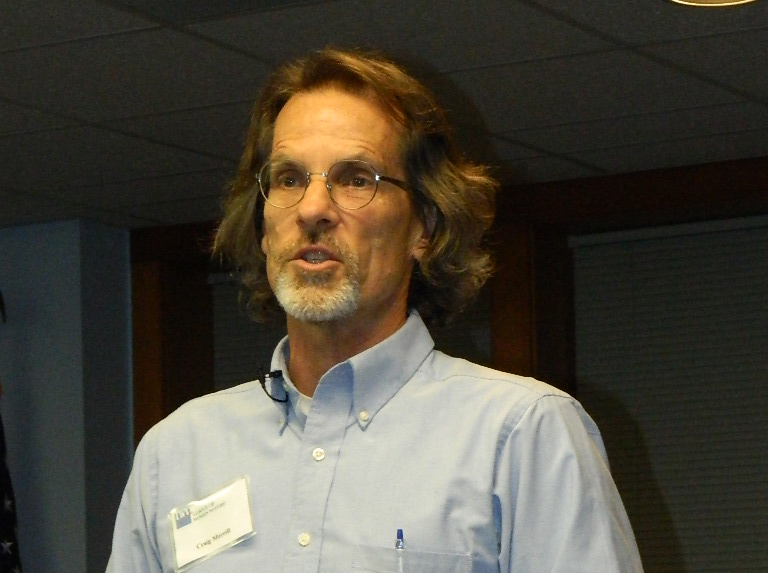 Craig Merrill, a member of the Dare County League of Women Voters Board of Directors and chair of its Natural Resources Committee, was on hand October 10 in the Kill Devil Hills Town Hall Meeting Room with a detailed presentation session on six amendments to the North Carolina Constitution facing voters on the November 6 ballot. Philip S. Ruckle Jr. photo

In November, North Carolina voters will be deciding on a number of elected positions in addition to casting votes for or against six separate amendments to the state’s constitution.

The current constitution, in place since 1971, is the third in North Carolina history, with only 11 proposed amendments during the past 30 years.

A recent online survey of more than 1,500 NC registered voters across the state, conducted by Elon University, reveals that a majority of people do not know very much about the amendments and some that say they do believe the amendments would have the opposite effect of what they would really do. The poll found also that support for two of the constitutional amendments shifted when voters received additional information details about those amendments.

Helping bridge that information gap, the League of Women Voters of North Carolina sponsored a special October 10 meeting at the Kill Devil Hills Town Hall Meeting Room to provide information on those six amendments to the North Carolina Constitution facing voters on the November 6 ballot.

Leading the review and an interactive discussion was Craig Merrill, a member of the league’s Board of Directors and chair of its Natural Resources Committee.

Merrill said he moved to the Outer Banks in 2016 after 23 years in the Navy, a few years as a principal engineer in industry and retiring as a civil servant from a Bethesda, Md. Navy lab. He added that his background as a researcher helps when describing the formulas used to define gerrymandering and investigating the amendments.

Focusing on the six potential changes to the state’s constitution, Merrill presented his information in three parts. Starting with an explanation of the amendment creation process, he provided a general overview summary of the amendments with the league’s position on each, followed by a more in-depth and detailed session on each individual amendment.

“The punchline is that none of six proposed amendments meet the criteria to be supported by the league,” said Merrill

According to Merrill, amendments help us adapt to changing circumstances and a good and proper constitutional amendment addresses a serious public policy problem that cannot be dealt with through legislation or politics, uses a deliberative process to fix it in an enforceable manner, is written with minimal unintended consequences and helps make government more representative or strengthens individual rights or both.

Merrill went on to say, in a nutshell, none of the amendments meet the league’s criteria for support, with four of the six dangerous enough to the wellbeing of our state for the league to oppose them. In addition, there is strong bipartisan opposition from five former governors and six retired Supreme Court justices to two of the four amendments opposed by the league.

Merrill covered each of the six individually.

Digging in deeper, Merrill explained that almost all amendments have stirred various amounts of controversy, with some issues undergoing courtroom battles over the language on ballots or lack of vital information.

Hunting and fishing: The league has no position here since these activities are outside the group’s normal function. It was pointed out, however, that the amendment is broadly worded in an attempt to reaffirm the rights of people to hunt and fish in response to concerns that animal rights organizations are working to restrict or even prohibit hunting and fishing. It is not clear what actual changes to North Carolina law would take place and the vague language could lead to unintended consequences.

Victims’ rights: The league has no position, but Merrill explained that this amendment, similar to Marsy’s Law in California, expands existing victim rights, broadens the definition of who would be a victim in North Carolina and is part of a national push to do so. Supporters appeal to a sense of fairness with the idea that a victim should have rights equal to those of the accused. The rights of a defendant apply when the state is attempting to deprive the accused of life, liberty or property and serve as a checks against government abuse. Victims’ rights are rights against another individual and could in fact trump a defendant’s rights. Some of the concerns with this amendment center on the financial impact to local jurisdictions, already short staffed and overburdened, that will be required to implement the law. According to Administrative Office of Courts estimates, this unfunded mandate would cost an additional $30 million annually, if not more. Other concerns include potentially slowing down court proceedings with an adverse impact to the accused.

Income tax cap: The league opposes this amendment because they say it limits state funding options available to future legislators, will not reduce the state’s financial obligations, may lead to an increase in “hidden” taxes and shifts the tax burden to lower income workers and families. It rewrites Section 2 (6) of Article V to read “The rate of tax on incomes shall not in any case exceed seven percent, and there shall be allowed personal exemptions and deductions so that only net incomes are taxed.” The state’s current income tax rate of 5.499 percent will not change regardless of what happens with this amendment.

Voter ID: The league opposes this amendment because they say it creates a requirement to have a photo ID to be able to vote with no details on what photo ID needs to be provided, uses tax dollars to try to fix something that is not broken and is an attempt to suppress and disenfranchise minority groups who typically vote Democratic. Although an April 2017 Charlotte Observer editorial said a State Board of Elections audit of the 2016 election found that only one of 4,769,640 votes cast would probably have been avoided with a voter ID law, buried in the middle was the notation that the board’s investigation found 508 ineligible votes cast. In another report by WTVD-TV Raleigh-Durham with no date attached, the state Board of Elections revealed that more than 35,000 people may have double voted by casting ballots in North Carolina and another state during the 2012 election. While there is no indication that fraud was involved, the numbers support some claims for action. However, the Public Interest Legal Foundation wrote in its study “Safe Spaces” that the 1993 National Voter Registration Act makes it easier for non-citizens to register to vote because there are no other verification systems required to be in place. It allows people to register to vote at the same time they apply or renew a driver’s license without any further verification, even if a Green Card or foreign passport is presented to identify themselves at the time of registration. As for this amendment, the General Assembly has not yet written the actual law that would be enacted if this amendment passes and no attempt has been made to address election process weaknesses identified in the 2016 audit. North Carolina’s last attempt to create a voter ID law was ruled unconstitutional in 2016.

Changes to judicial appointments: The league opposes this amendment, one of the most controversial within the group, as do a number of other groups including the unusual combination of former GOP governors Jim Martin and Pat McCrory together with former Democratic governors Jim Hunt, Mike Easley and Bev Perdue and six former Supreme Court chief justices. Currently, when judges die, quit or retire, the governor appoints a new person from a pool of candidates to take over until the next election. This amendment would take that power away, shifting control of judicial vacancies from the governor to the General Assembly, would require the governor to select an appointee from a list of two provided by the state legislature within 10 days or the legislature will make the selection, extends judicial appointments beyond the next election to as much as four years and presents an apparent conflict of interest with the legislature naming judges that will rule on very laws the General Assembly created.

Establish an Eight member Board of Ethics and Elections: The league opposes this amendment which is materially identical to an earlier approach that was overruled by the NC Supreme Court. Merrill pointed out that the current board has four Democrats, four Republicans and one politically unaffiliated person. This amendment would remove the unaffiliated ninth representative, leaving the board equally split with eight members, where deadlocked votes will in turn cause delays and put elections at risk. An earlier version, which would have stripped governors of their power to appoint members to hundreds of boards and commissions, was trimmed to include changes only to the State Board of Elections and Ethics Enforcement and transfers any power to pick board members from the governor to the General Assembly.

In summary, Merrill explained that there are six important amendments on the November ballot.

“You need to understand them and vote for or against them appropriately,” he added. “In general, these amendments are vague, most lacked any real deliberation or debate and none of them meet the criteria that would classify them as a well-crafted piece of legislation.”

The League of Women Voters was founded in 1920, just six months before the 19th amendment to the U.S. Constitution, which gave women the right to vote, was ratified. The league was primarily concerned with the roughly 20 million new women voters carrying out their new constitutional right and responsibility.

Today there are more than 1,000 local chapters nationwide and 50 state leagues with a national board of directors in addition to local and state leagues organized in order to promote the purposes of the league and to take action on local and state governmental matters. The Dare County unit formed in April 1987 and has published a Citizen Guide every year since 1988.

The League of Women Voters is officially nonpartisan, in that it neither supports nor opposes candidates or parties. It does, however, support a variety of progressive public policy positions, including campaign finance reform, universal health care, abortion rights, climate change action and environmental regulation and gun violence prevention.