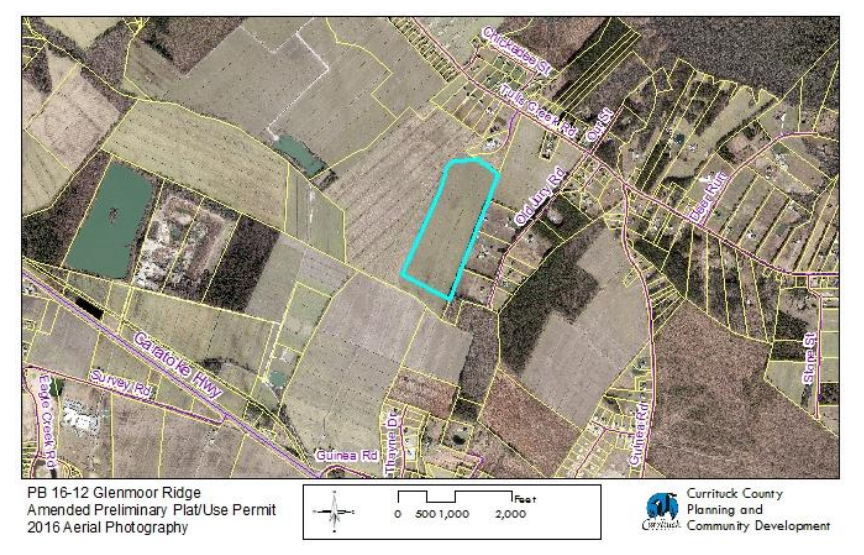 Glenmoor Ridge subdivision in Moyock will include 50 lots on 50.67 acres with access to the site along Campus Drive. (Currituck County image)

During an October 12 mid-month meeting, Currituck commissioners approved one project, denied a code change request and put a third request on hold.

After granting an extension request for a subdivision on Tulls Creek Road, county commissioners approved a site plan change that adds two lots to the original 48-lot conservation subdivision.

Appearing before commissioners on Monday, Mark Bissell, with Bissell Professional Group in Kitty Hawk, explained that the request is a lot recombination with the new Currituck Reserve subdivision and a right-of-way dedication that has increased the Glenmoor Ridge subdivision by 2.99 acres, allowing for the addition of two lots and a cul-de-sac for a total of 50 lots on 50.67 acres. Access to the site was also discussed as being along Campus Drive.

The only real question about the project was from Mike D. Hall, who asked how drainage for a nearby ditch would be affected. Bissell said most of the drainage will be away from the ditch.

The site plan amendment was given unanimous approval.

Although there was support for a request to allow the use of temporary residences during construction of new dwellings, a practice allowed prior to the 2013, it was not enough.

In making the request, Stephen Grout said he disagrees with staff’s position that campers and trailers are not safe during adverse weather. Adding that, under the right conditions, they could be secured, Grout went on to say that in many cases a trailer would be pulled out following an evacuation order.

Marion Gilbert said among her biggest concerns were that while Grout was looking to work out living arrangements during construction of his Corolla home, the code change would be county wide leading to enforcement problems elsewhere.

The county does allow similar temporary housing but only when undertaking emergency construction or the repair of existing residences and the Planning Board recommended approval for a limited period of time with a use permit.

During discussion, both Hall and Paul Beaumont recalled living in campers while building homes and Hall added that he saw little difference between allowing it for repair of existing homes and new home construction.

In the end, a motion to deny due to the request for a temporary residence during new construction is not a necessary use, is inconsistent with the county’s 2006 Land Use Plan and is not in the best public interest carried with only Hall and Beaumont voting against it.

Although the third request for the night, from Ponderosa Enterprises Inc., had considerable support for the concept, there were too many unknown details for commissioners to vote for the proposed rezoning request.

Sawyer explained that the process started about four years ago to determine what would be the best use of the property would be.

“We wanted to present something that would be an asset to the county,” said Sawyer.

According to the conceptual plans submitted, the property would have a single entrance from Shortcut Road and allow for a fuel and convenience store with four multipurpose buildings between 7,000 and 10,000 square feet with green space and a sidewalk.

One hang up came on just what businesses would be in those buildings. The other was on a fuel station within the county airport overlay.

After considerable discussion, it was agreed to have the issue tabled until the November meeting to allow time for Ponderosa Enterprises Inc. representatives to talk with county staff members and work out what businesses might be allowed and excluded from the project.