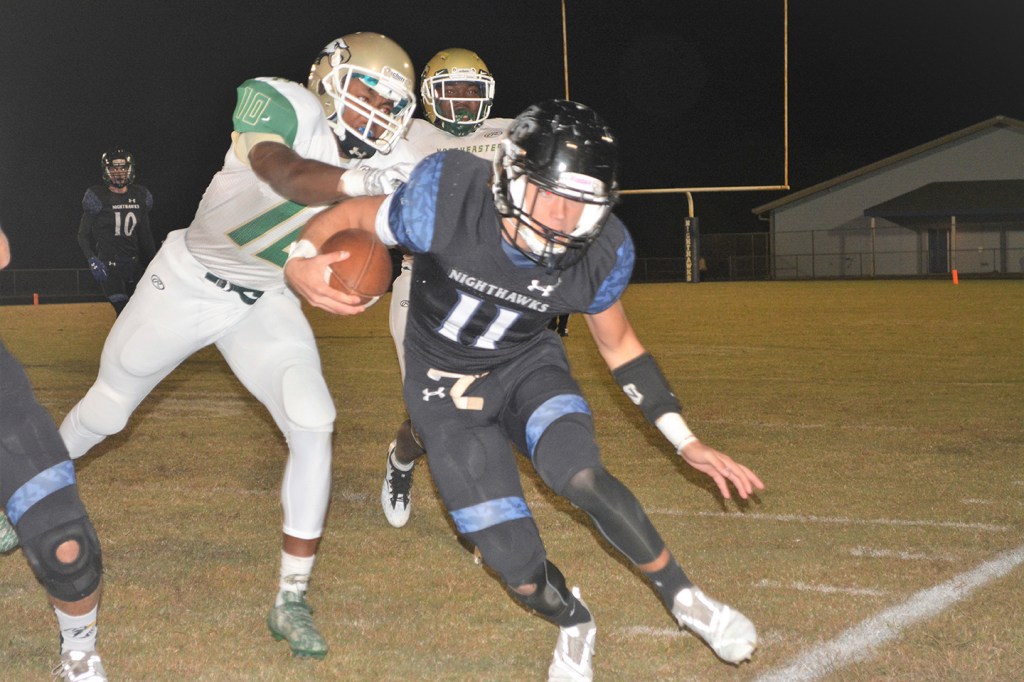 First Flight senior running back Noah Nurney, right, attempts to stay in bounds while Northeastern's senior linebacker Robert Ferguson looks to push him out of bounds in front of the Nighthawks bench Thursday night in Kill Devil Hills. The undefeated Eagles scored early and often blanking the Nighthawks 42-0. First Flight heads to Currituck next and Northeastern hosts Pasquotank. Both games are scheduled for Nov. 2. Daryl Law photo

The Currituck County varsity soccer team opened this week’s schedule of high school sports events by winning its Monday, October 22, conference game against Pasquotank County by a score of 3-0. 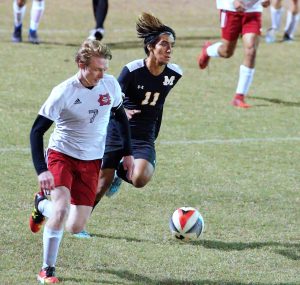 Josiah Simmons of Cape Hatteras and J. Zafra of Manteo are side by side as they race down the field during this week’s soccer matchup between the two Dare County Schools. Zafra scored a goal and recorded an assist in the 6-0 Manteo win. Edward L. Mullins photo

Playing in the second round of the 2A regional duels, the First Flight varsity tennis team won an October 23 home playoff match against Greene Central by defeating the Snow Hill team 5-1. Later in the day, First Flight’s varsity volleyball team lost its 2A state tournament match against Goldsboro 25-9, 25-15 and 25-5. Playing at Currituck, the Knights varsity volleyball team advanced in its 2A tournament bracket by defeating North Johnston 25-8, 25-14 and 25-9.

After ending regular season play in volleyball with a 3-1 win over Edenton’s John A. Holmes back on October 18, the Manteo he Redskins entered the first round of the 1A state playoffs at Camden October 23 where they fell to the Bruins 25-12, 25-8, and 25-18. 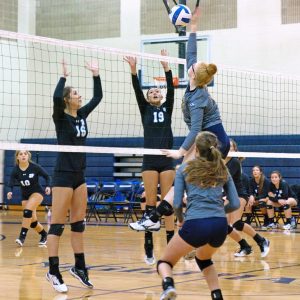 In regular season play, it was First Flight taking a 2-0 varsity soccer team win over Currituck at Barco on October 24 about the same time Manteo was coasting to a 6-0 win at Cape Hatteras. Playing at Pinetown that same evening, the Manteo Redskins JV football team overpowered Northside with a 40-0 non-conference game victory.

This weekend, on October 27, the Currituck County varsity volleyball team was scheduled to play take on South Columbus (Tabor City) in a 2A state tournament playoff game and the First Flight Cross Country was to run in the 2A regional meet at Newport.