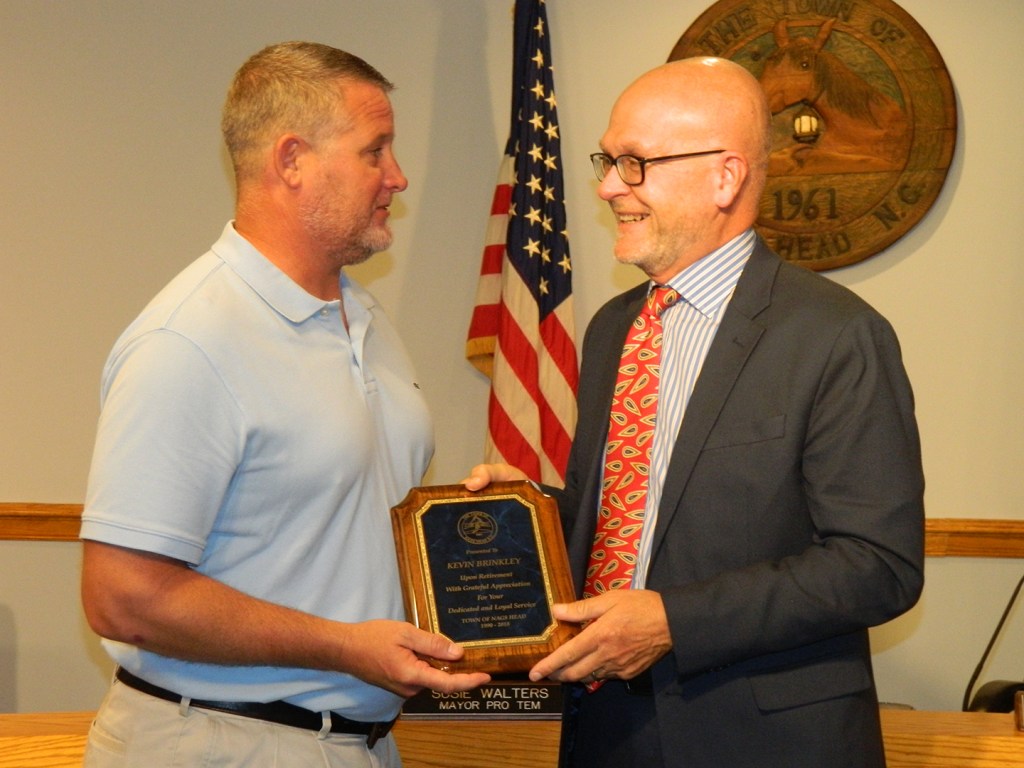 Nags Head Mayor Ben Cahoon presented a plaque of appreciation to Kevin Brinkley (left) during the November 7 Board of Commissioners meeting for Brinkley's years of service to Nags Head. Brinkley worked for the Nags Head Police Department from 1990 until his retirement September 1 of this year, rising through the ranks from officer to chief. Philip S. Ruckle Jr. photo

Board actions by the Nags Head Board of Commissioners at their November 7 regular session meeting included approval of a First Flight Adventure Park expansion request, filling a Planning Board vacancy and scheduling a code change for beach equipment regulations for the December meeting.

Before digging into the day’s business, commissioners took a few minutes to say farewell to Police Chief Kevin Brinkley and present him with a plaque of recognition and appreciation for 28 years of service to Nags Head.

“Public Safety is such a difficult job, we are not likely to see many more officers like him in the future,” said town manager Cliff Ogburn. “Chief Brinkley came to the town, he stayed with the town and then he retired from the town. And while he was here, he did his best to make the town and our community a better place.”

Brinkley worked for the Nags Head Police Department from 1990 until his retirement September 1 of this year. Rising through the ranks, Brinkley advanced from officer to police chief. Deputy Police Chief Perry Hale is currently serving as the interim chief.

The Earl Murray Jr. Employee of the Year presentation is named in honor of Police Sergeant Dulan Earl Murray Jr. who died in May 2009 when, while responding to a burglary in progress, his patrol car went out of control during a period of heavy rain and struck a utility pole. He had 26 years of law enforcement service, 12 years with the Nags Head Police Department.

Faced with at least half a dozen speakers against changing the town’s regulations for tents, umbrellas and cabanas on the beach, Mayor Ben Cahoon suggested a committee with members of the renal industry meet with town staff and commissioners to explore what changes would be best.

According to town documents, an increasing proliferation of businesses providing concierge services for renting and setting up beach equipment has led to a number of issues. To address them, Nags Head officials were prepared to require permits, limit commercial signage and restrict commercial operations to between 10 a.m. and 6 p.m.

Pointing out that the proposed beach equipment regulations treat businesses different than individuals, Outer Banks Chamber board chair Pat Broom added that this issue impacts a lot of people.

While some speakers said the time restrictions would hinder their ability to set up equipment and delay their customers access to the beach, there were others that said it would put them out of business.

While setting up part of the committee, Mayor Cahoon said it would include Ogburn, deputy town manager Andy Garman and commissioners Webb Fuller and Michael Siers as chair. In addition, several people involved in the beach equipment rental business, including those that spoke at the Wednesday meeting, would be contacted to gather information on any potential, unintended consequences with report back to the board at the December meeting. 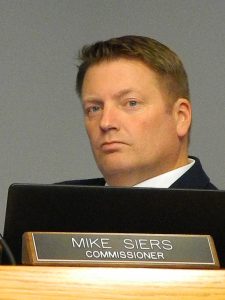 During the November 7 Nags Head commissioners meeting, Michael Siers was named to chair a committee looking into any potential, unintended consequences from stricter regulations for tents, umbrellas and cabanas on town beaches. Committee members will also include several people involved in the rental business that spoke at the Wednesday meeting. A report is due back to the board at the December meeting. Philip S. Ruckle Jr. photo

Although a public hearing is not required for the intended code change, the town is also not prohibited from holding one. None has been scheduled.

Working through the rest of the agenda, there was more than an hour of testimony and discussion before a First Flight Adventure Park site plan amendment could be approved.

According to deputy planning and development director Kelly Wyatt the owner, Bradley Carey, would like to add eight new elements, or poles, between 8.5 and 14 feet tall within the park’s existing ropes course footprint and extend the hours of operation into the night, which will require some site lighting. The original 2013 site plan approval for the park at 6714 South Croatan Highway proposed 60 poles with 24 required customer and employee parking spaces. Because parking spaces are based on the number of pole elements, eight more would require three additional parking spaces.

Wyatt added, however, that it was possible the applicant may not need any additional parking.

Explaining that some people arrive on bicycles, adding a bicycle rack would cover two of the three vehicle parking spaces and town code allows council to waive the remaining space if certain conditions are met. There was considerable discussion on what those conditions are, which included a review of emergency responder access to a boardwalk to the sound from the Pamlico Jack’s property to the north and easements filed with the 2013 approval, before Carey was invited to offer comments.

When he did speak, Carey explained that there was a discrepancy in that the park only has 48 pole obstacles and the eight new ones would actually be 25 foot poles, not 14. He went on to say the new elements would be for children, those seeking a less difficult course and anyone afraid of heights. He added also that because the park operates on a reservation only basis with only 15 people at a time, he did not see an influx of additional vehicles. Most of the night lighting would be with headlamps.

“We limit our reservations to book only 15 people every 30 minutes,” explained Carey. “In the summer our operating hours are from 8:30 a.m. to 5:30 p.m. The trend has been for customers to come earlier and later due to the mid-day heat when they are on the beach.”

When Carey finished speaking, Wyatt advised commissioners that with only 48 elements, the park already had the required parking places because the site was approved for 60. Commissioner Renée Cahoon then moved to approve the request as presented, which received unanimous approval.

In other business, Aaron McCall provided an annual Nags Head Woods Annual Report 2017-18, saying there are currently five full time employees with a number of volunteers providing work hours throughout the year. A mostly a self-guided facility, there are now more than 10 miles of maintained trails. 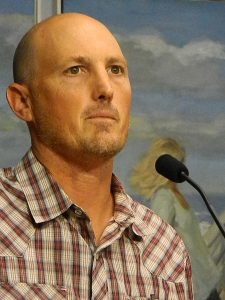 Renovation of the parking area with an Outer Banks Community Foundation matching grant is complete with new pavement, removal of an old pump station, addition of ADA parking, lighting and safer ingress and egress.

Commissioners asked about the deer population and health, to which McCall advised that he depends on feedback from hunters. He is not sure how many there are, but he knows there are deer in the preserve and is not aware of any health issues.

He did advise, however, that is important for visitors to stay on maintained trails, especially during the hunting season to avoid interfering with hunters there.

Under other new business, Megan Lambert was named as a replacement for outgoing vice-chair Kate Jones, Ogburn advised that requests for town recycling bids would go out with bids due back in January, Mayor Cahoon was designated a voting delegate for a November North Carolina League of Municipalities Advocacy Goals Conference with Ogburn his backup and a letter of support for allowing marsh sills over bulkheads was authorized.

A Crisis Track software for damage assessment related to Hurricane Michael overview was rescheduled for December. The board entered a closed session to discuss selecting an employee of the year, possible sale of town’s interest in The Soundside Outer Banks Event Site and possible acquisition of property located at 2620 South Bridge Lane.

The terms under which the town would sell its interest in the event site and what terms were acceptable to  acquire the South Bridge Lane property were discussed with no decision made. The Earl Murray Jr. Employee of the Year decision will be announced in December.