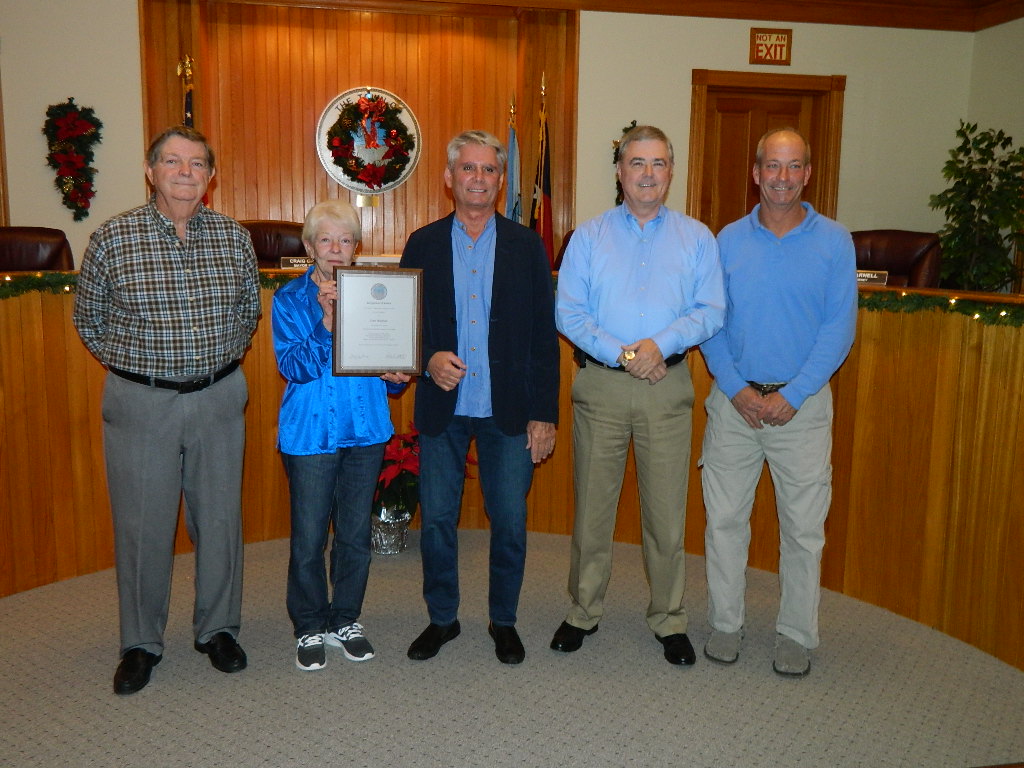 During the December 3 Kitty Hawk Town Council meeting, former Kitty Hawk councilman Ervin Bateman,center, was thanked for his service to the town and presented with a plaque of appreciation. With Bateman are, from left, Kitty Hawk Mayor Gary Perry, councilwoman Lynne McClean, Mayor Pro Tem Craig Garriss and councilman Jeff Pruitt. Bateman was elected to be the Dare County Board of Commissioners in November. Philip S. Ruckle Jr. photo

Kitty Hawk Town Council needed to cast only one vote at its December 3 meeting in order to fill the seat vacated by former Kitty Hawk councilman Ervin Bateman.

The vacancy was created when Bateman was elected to be a Dare County commissioner in the November general election. At Kitty Hawk’s November meeting prior to that election, council decided that if Bateman were elected it would advertise that applications were being accepted from persons interested in serving out the remainder of Bateman’s term, which ends December 2019.

Entering the pool of candidates were Charlena Ambrose, David M. Hines, Nick Martini and Tina M. Tice. At the beginning of Monday night’s meeting, however, Mayor Gary Perry advised that Ambrose and Martini had withdrawn their names.

Perry then explained that town code does not set out a specific method for filling unexpired terms of office, nor does the law require council to use any particular process for selecting someone to fill the vacancy – only that it must take place in an open meeting.

“If council majority agrees,” said Perry, “I propose we consider filling the vacancy of Ervin Bateman using a Motion to Nominate a candidate, with Second required to proceed to discussion and then vote with a majority needed to confirm the nominee.”

Perry added that nominations were not limited only to the two formal applications on hand.

With no other nominations offered, Perry closed nominations and during discussion Pruitt said all the choices were good and that it was a tough decision.

“I agree with Jeff,” said Mayor Pro Tem Craig Garriss. “It was a tough decision and a we lost some sleep over this because this is Kitty Hawk’s future right here. But when I look at the applicants we had, based on experience, training and knowledge, it came out to be Tina Tice.”

At the end of discussion, Tice was elected on a 4-0 vote and welcomed on board by Perry, who advised that Tice would be sworn into office at the January meeting.

Earlier in the evening during a brief ceremony, Bateman was thanked for his service to the town and presented with a plaque of appreciation.

“If anybody in this whole deal has been blessed, it has been me,” said Bateman. “Because not only have I grown as a person, I’ve grown emotionally, I’ve grown intellectually, I’ve grown spiritually and I’ve learned that giving back is much, much more important than receiving.”