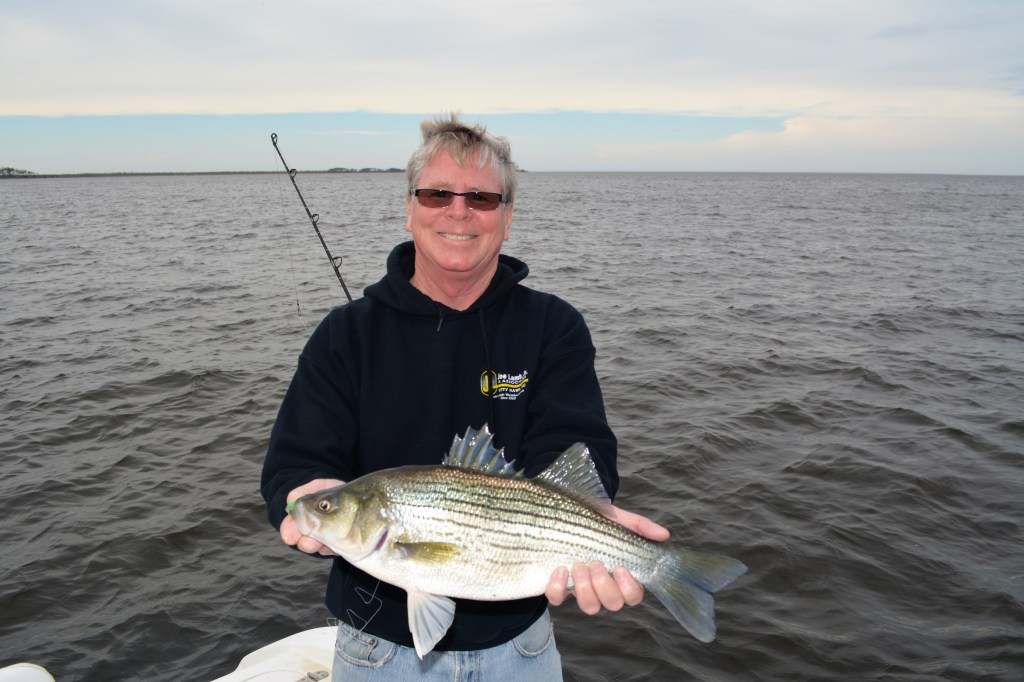 Late last Sunday afternoon, we cut across the sound heading south from Southern Shores to the Manns Harbor bridge in search of striped bass. Before it was over, we’d caught, photographed and released six nice-sized fish.

It was a heck of good time and it quickly reminded us of the good old days ocean fishing for the big 45-inch ones from the same boat on runs departing from Oregon Inlet. 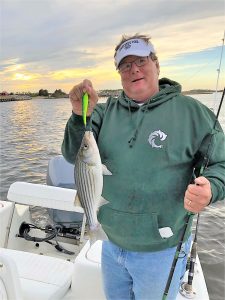 On Sunday’s trip, we rushed to gather gear and launch the Sea Pro from the marina ramp. Once we turned the corner at Martin’s Point, it was evident there was plenty of wind out on Currituck Sound.

By the time we passed Colington Island to our portside, it was fairly rough and a bit bumpy due to the amount of fetch in the open waters of the larger Albemarle Sound just west of us. Dan and Tom stood at the helm while I sat on a bench seat behind them and hunkered down a bit. 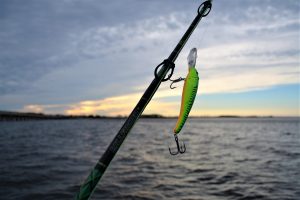 Dan had to do some fancy driving to smooth out the ride as the 22-foot-long vessel cut through the building wind chop. Occasionally, I’d stand up to stretch my legs, holding on to the T-top grab rails and keeping my knees slightly bent just like a downhill snow skier does to absorb bumps.

I sure was glad to see the bridge on the horizon and before long we were dropping back the lures on the matching boat poles. These Stretch lures feature clear lips to make them dive. He had some inside info on where the rockfish were biting so we steadily headed in that direction.

Not too many other boats were out and we started to wonder if the fish were even there or not. We were driving parallel to the numbered bridge pilings; another angler was driving his boat back and forth under the bridge spans. 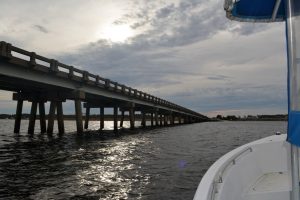 At one point, we were near land and peeled off to circle around. Then it happened: bamb, bamb. Two hard bites followed by seconds of scrambling into position and we had two fish on. I got to reel in one and so did Tom while Dan was still on the wheel.

Although they looked to be well over 18 inches long and legal fish, we quickly decided to free them for another day. Man it felt great to catch them and get the “stink outta the box.” 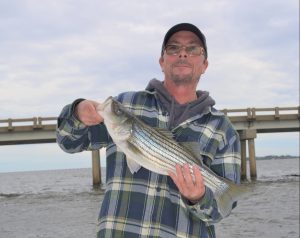 After coming around, we trolled in the opposite direction. As for the timing of the bite, I had to wonder if we had driven over top of a hole or perhaps the lures had floated closer to the surface when we slowed down to make our turn.

Either way, we had two fine fish mentally filed away as well as captured on the camera’s memory card. At one point, Dan rigged up a lighter rod and reel. He and Tom each got to fight one on that tackle and those were released as well.

The wind dropped out big time and the sun was hitting us pretty good. We enjoyed a couple beverages and talked a lot about the old days when the three of us used to venture way out in the ocean in search of those giant stripers.

Those big-time fish were a lot of fun to catch and we did keep those at times because Dan’s family has a tradition of making an excellent fish stew that feeds a ton of people and includes eating crispy bacon while watching the cooking!

Although we couldn’t have had more fishing fun on this trip, the three of us agreed the day we caught the stripers when the humpback whales were swimming next to us was the best day of fishing ever for all three of us. I’m guessing that was around a decade ago.

MORE ON FISHING ON THE OUTER BANKS: