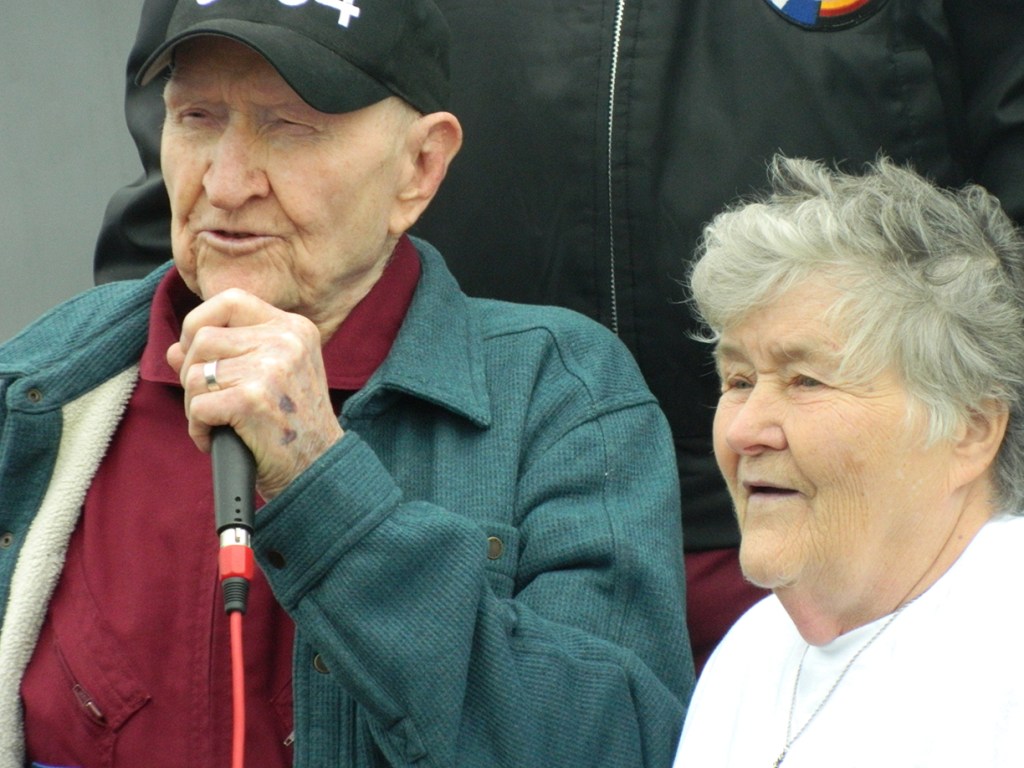 Retired Colonel Gail S. "Hal" Halvorsen, left, was a pilot in the Berlin Airlift of 1948-49 who became known as the Candy Bomber for dropping candy and gum by parachute to children living in the ruins of West Berlin. With him is Karin Edmond of Manteo, who was one of the children in Berlin that Halvorsen dropped candy to. Philip S. Ruckle Jr. photo

Area children were on hand at the Dare County Regional Airport this past Sunday to participate in a reenactment of the famous 1948-49 Candy Drop over Berlin by a C-54 transport crew.

It was in 1948 that Russia isolated its section of Berlin, which set in motion American, English and French efforts to conduct a massive airlift to provide food and supplies to the German city’s more than two million people. 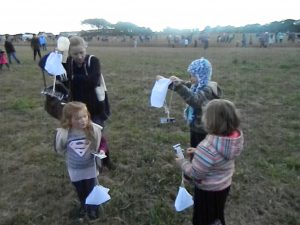 Breahna Cavanaugh,left, and her mother Shannon Decou stop to share some of the candy collected at Sunday’s reenactment of the famous 1948-49 Berlin Candy Drop with Carolynne Bryant, in hat, and Esther Hartley. Philip S. Ruckle Jr. photo

Among the pilots making humanitarian runs was Gail Halvorsen, at that time a young lieutenant.

During a rare break between flights, Halvorsen was at Tempelhof air field runway in the American sector of Berlin. It was after a brief encounter with several children ages 8 to 13 that the idea for his candy runs hit him.

With so many planes in the air, he told them they would know his plane because he would wiggle the wings as he came over the airport.

Before long, other flight crews joined Halvorsen’s efforts and, along with some attention from the press, a wave of public support brought enough donations for two dozen plane crews to drop 23 tons of chocolate, chewing gum and other candies over various places in Berlin by the end of the airlift.

Now some 70 years later Halvorsen, 98, still runs across some of those children from Berlin, like Karin Edmond of Manteo.

One of the children Halvorsen dropped candy to in Berlin, Edmond connected with him during a Candy Bomber reenactment here on the Outer Banks in 1999. 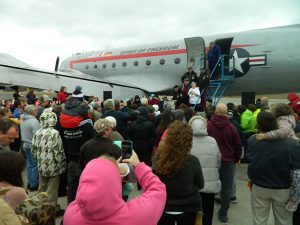 Karin Edmond of Manteo addresses a crowd of several hundred people Sunday at the Dare County Regional Airport just prior to a reenactment of the famous 1948-49 Berlin Candy Drop. Along with Edmond, who was one of the children in Berlin, are Gail Halvorsen, the pilot that started the Candy Drop, to her right, and Timothy A. Chopp, founder of the Berlin Airlift Historical Foundation, on the bottom step. Also part of the flight crew are Jim Rueger, top left, and Scott Szuhay, right behind Edmond. Philip S. Ruckle Jr. photo

Since that 1999 meeting, Edmond has not missed any reenactments and is the event’s organizer, working year round to raise donations to help fund the local candy drop part of an annual 10 month tour across the U.S. by the Berlin Airlift Historical Foundation, a group founded in 1988 dedicated to preserving the memory and legacy of the Berlin Airlift of 1948-1949.

According to one of the pilots, Timothy A. Chopp, who is also the founder of the Berlin Airlift Historical Foundation, Dare County is the final stop for the year for the restored C-54 cargo plane. This year, the plane was on display all day Saturday. Visitors could tour the inside, which has been converted into a museum dedicated to the airlift with artifacts, displays and related information.

Sunday was the Candy Bomber reenactment, with the 10:35 a.m. December 17 Wright Brothers Monument Flyover on Monday also on the schedule. After the flyover ceremony, Halvorsen headed back to his home in Utah and the C-54, Spirit of Freedom, will be headed for winter maintenance.