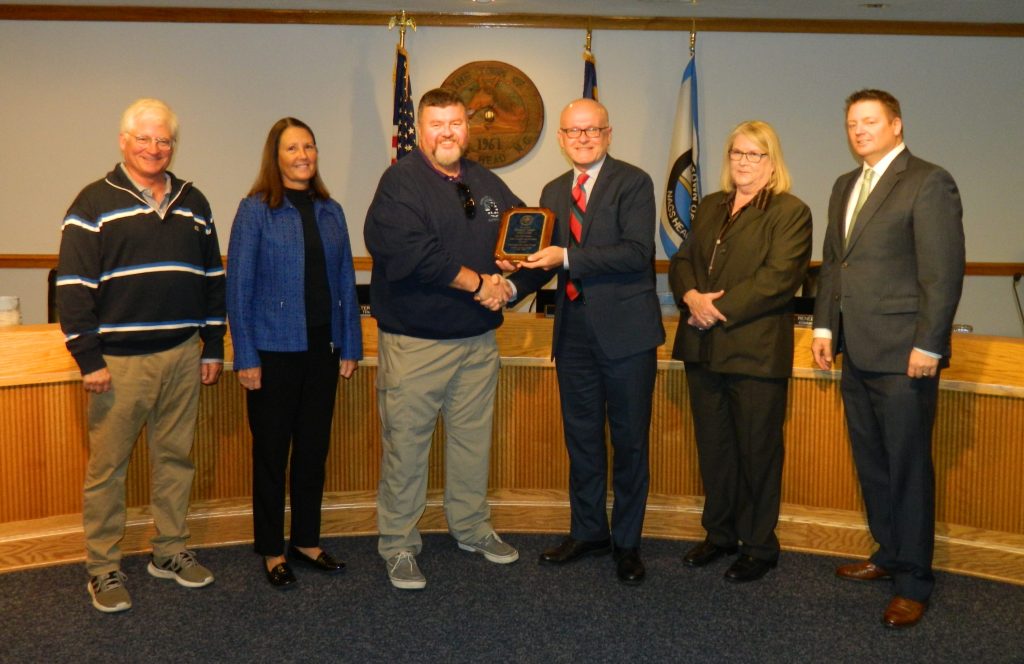 Former Fire Captain George "Chip" Holcomb (center left) was recognized by Nags Head Board of Commissioners for his recent retirement at the January 2 BOC meeting. Holcomb began as a volunteer in 1989, was among the first group of people hired on the town's career staff and has promoted to captain in May 2000. With Holcomb are, from left, commissioner Webb Fuller, Mayor Pro Tem Susie Walters, Mayor Ben Cahoon, commissioner Renée Cahoon and commissioner Michael Siers. Philip S. Ruckle Jr. photo

Appearing on behalf of Miller’s Waterfront Restaurant and Tale of the Whale Restaurant at the January 2 Nags Head Board of Commissioners meeting, Brian Rubino with Quible and Associates asked for a code change that would allow docking up to eight boats at each of those two restaurants.

According to Rubino, the permitting process with CAMA is hung up on a zoning ordinance that restricts commercial marinas to approved outdoor recreational sites. A previous 2017 request for 10 boats failed, the current request for eight docking facilities would be for docking only without other marina services. 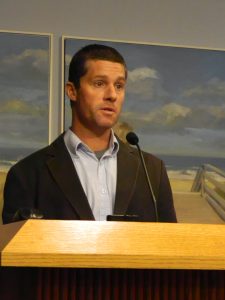 Brian Rubino with Quible and Associates was at the January 2 Nags Head Board of Commissioners meeting to ask for a code change that would allow docking boats at two restaurants. Commissioners tabled the request until the February meeting to allow town staff and the town attorney to address any board concerns. Philip S. Ruckle Jr. photo

Former Mayor Bob Edwards, during public comments, said he had reservations because if approved it would open the door for 14 different locations, not just the two restaurants. He said also that in addition to an increase in the potential for soundside flooding and in some places piers up to 600 feet out into the sound would be needed to reach waters deep enough.

After commissioner Web Fuller said he was not convinced patrons could not dock their boats under current code, deputy planning director Kelly Wyatt said she was hesitant to say it was not in violation.

Some of the discussion centered on protection of marsh lands and safety of recreational users out in the sound.

After more than an hour of discussion and two failed motions – one to take no action and another to approve it – commissioners decided there were too many unanswered questions and voted to table the request until the February meeting to allow town staff and the town attorney to determine if it is compatible with the town’s land use plan and address any other board concerns.

A site plan amendment to add a 72×32 foot building to house water treatment equipment and electrical components an existing Village at Nags Head wastewater treatment plant on Sea Chase Drive received a much quicker approval, as was the reappointment of Jack Cooper as chair and Margaret Suppler as vice chair to the Board of Adjustment and Meade Gwinn to fill a Planning Board vacancy.

In other business, one former and two current town employees were recognized. 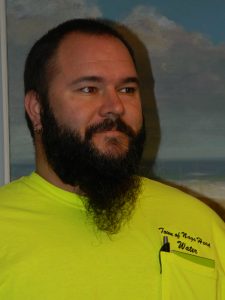 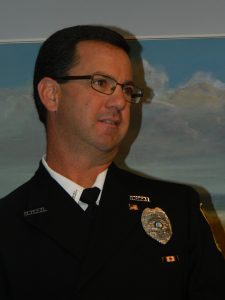 Nags Head firefighter/EMT Diego Dayan was recognized at the January 2 Nags Head Board of Commissioners meeting for completing 20 years with the town. Dayan was one of the first firefighters to complete the master firefighter program. Philip S. Ruckle Jr. photo

The third recognition of the day was for the retirement of Fire Captain George “Chip” Holcomb. Holcomb began his career with Nags Head as a volunteer in 1989 and was among the first batch of people hired on the town’s career staff. He has promoted to captain in May 2000.

Among the other regular business for the day, commissioners authorized a five year finance agreement with Branch Banking and Trust Company for $705,000 at an annual interest rate 3.11 percent to cover the cost of HVAC renovations to the Doug Remaley Fire Station 16 by Piedmont Service Group in Chesapeake, Va. and stormwater construction work by Hatchell Concrete, Inc. at the Red Drum Ocean Outfall, along West Bridge Lane and along South Virginia Dare Trail between East Mall Drive and East Epstein Street.

During discussion, deputy town manager Andy Garman pointed out that although HVAC bids were higher than expected, it was in line with the work required and commissioner Michael Siers said he would have liked to have seen more local bids for the work.

Also approved was a resolution supporting the medical use of marijuana in North Carolina and a $115,000 budget amendment for the purchase of real property located at 2620 Bridge Lane stormwater improvements.

The board recessed until its  January 24- 25 retreat at 2621 South Virginia Dare Trail.