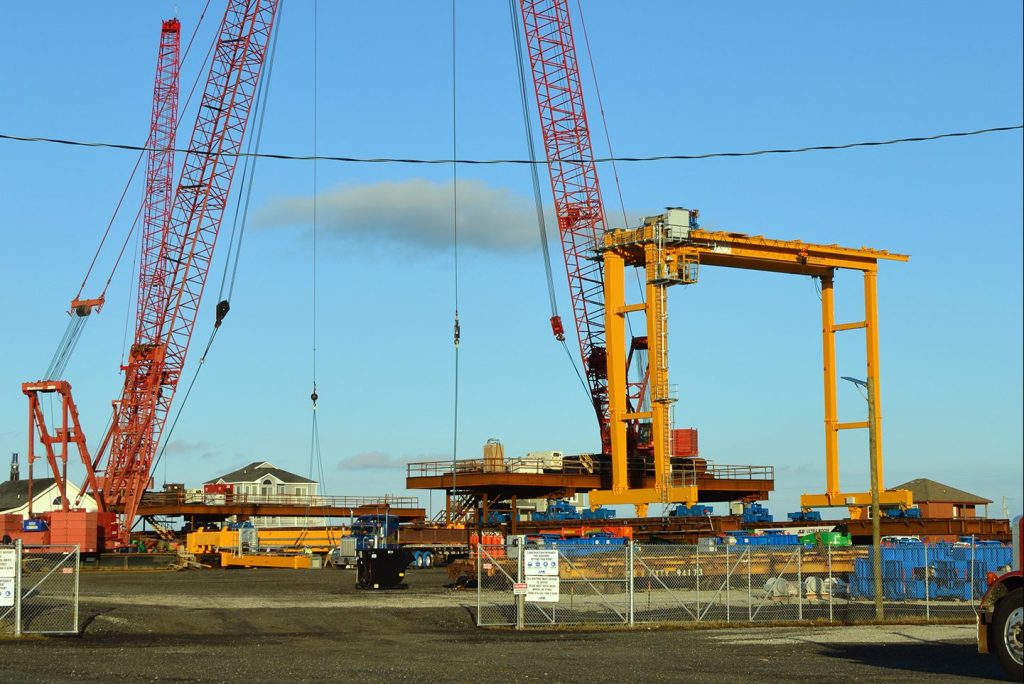 Rodanthe Bridge work site at southern end of the project with one straddle or gantry crane. Another crane will be added at this site and two more at the northern start of the project, which is expected to be completed by April 28, 2020. Mary Helen Goodloe-Murphy photo

A three-judge panel of the Fourth Circuit Court of Appeals has unanimously rejected the appeal from Save our Sound OBX regarding the Rodanthe bridge.

The 2.4 mile Rodanthe bridge, called the jug handle or fish hook bridge, is designed to avoid the frequently overwashed S-turns on NC 12 at the southern end of the Pea Island National Wildlife Refuge. As designed, the bridge crosses refuge land, curves out into the Pamlico Sound and returns to Hatteras Island in Rodanthe.

The Save our Sound OBX group represents property owners along the Pamlico Sound shoreline. Six individual property owners in northern Rodanthe are also part of the lawsuit.

The appealed U.S. District Court decision rejected that argument saying that a 2016 environmental assessment met requirements and that the project could proceed while the appeal was ongoing.

Mark Haines with Save our Sound OBX said, “Obviously, we are disappointed in the outcome. We’re thinking about what to do next.”

Save our Sound OBX and the individuals filed the lawsuit against the North Carolina Department of Transportation and the Federal Highway Administration. Intervening in the lawsuit as defendants are Defenders of Wildlife and the National Wildlife Refuge Association, represented by the Southern Environmental Law Center.

Derb Carter, director of the North Carolina offices of the Southern Environmental Law Center, called the moving this portion of NC 12 “a well-reasoned, common sense solution to avoid the frequent shutdowns of Highway 12 . . .”

Carter, in the prepared media release also said, “NCDOT should plan now to start moving more threatened sections of the highway out of the refuge and into the sound, to ensure this lifeline remains safe and reliable for residents and tourists while preserving the refuge at the same time.”

The lawsuit did not stop some work on the new bridge project.

At the north end of the project in refuge, a 3,500-foot section of roadway for NC 12 is under construction east of the existing travel lanes. Vehicular traffic on NC 12 will be diverted to the new section while the old route is used for construction staging.

In Rodanthe in a large construction yard, a trestle bridge is under construction. The most recent feature is a big yellow piece of equipment called a straddle or gantry crane. Another gantry will be added to the Rodanthe skyline soon. Two more of the cranes will be at the northern end of the project. The two cranes will ride a rail on the trestle bridge to move pilings and girders into place.

The partial federal government shutdown has held up a permit from the U.S. Coast Guard and the permanent easement deeds from the National Park Service and the U.S. Fish and Wildlife Service.

At the Jan. 22 meeting of the Dare County Board of Commissioners, state transportation board member Allen Moran addressed questions about demolition process for the existing Bonner Bridge.

Preparation for the demolition will start as soon as traffic moves to the new bridge. Demolition must be coordinated with utilities.

Demolition will take about a year, said Moran. Teams will start at the north and south ends of the old bridge. Moran indicated that the start will be “as close as possible to deep water.” In the most recent Army Corps of Engineers navigation survey, it appears that deep water starts about 600 feet south of the high rise spans. 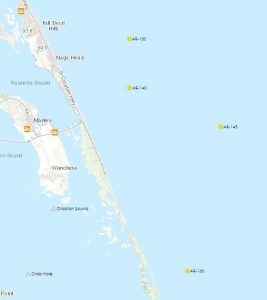 Also at the Jan. 22 meeting, James Fletcher spoke during public comment. He asked the Dare County Board of Commissioners to partner with the National Park Service to survey the southern portion of Bodie Island. Fletcher thinks that he and the Estate of W.A. Worth own the spit. If so, the private property could be used to build a structure to stabilize Oregon Inlet.

Commissioner Jim Tobin said “it’s worth taking a look at.”