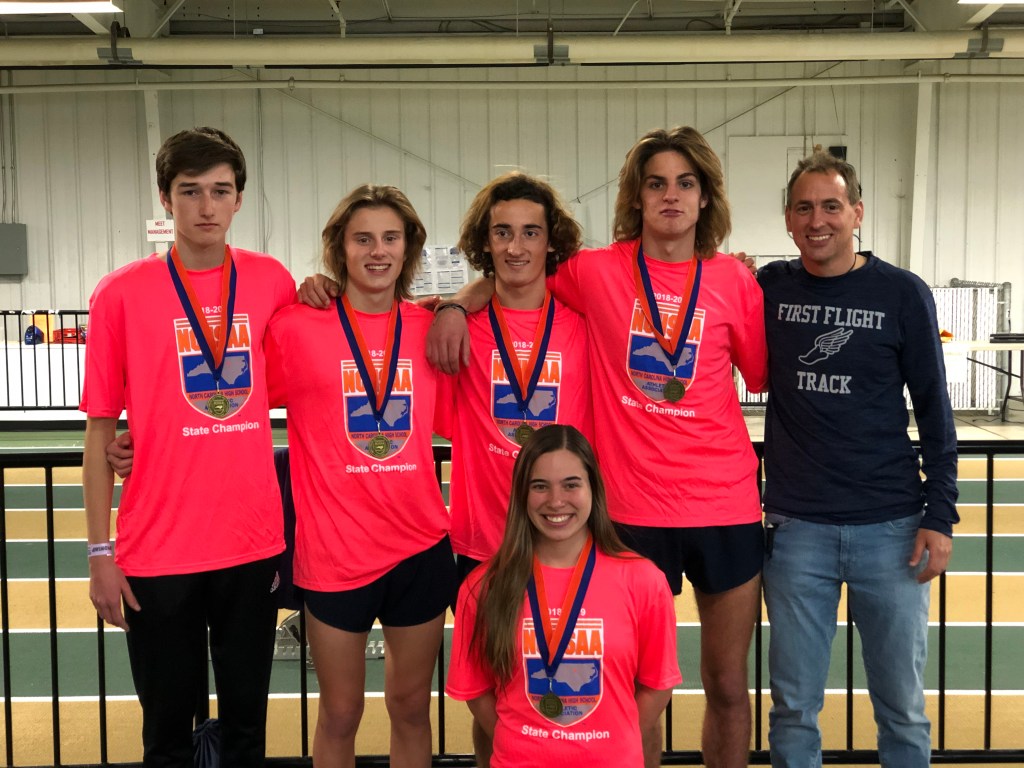 With 18 other jumpers eliminated at or before the five foot mark, the 1A/2A NCHSAA girls indoor high jump state championship was between Sabatini and Kathlyn Mauck, a Mount Airy junior.

When the bar went to 5-2, Mauck, who had cleared every other height on her first attempt, was over again with a single attempt, but it took Sabatini two tries to make the height. Moving the bar up to 5-4 proved to be too much for Mauck and after three attempts, she was out. The pressure was now on Sabatini. If both jumpers went out at 5-4 the championship would go to Mauck on the basis of fewer misses.

Rising to the challenge, Sabatini was over the vertical barrier on her second attempt at 5-4, which earned her the state championship and, as a bonus, a new school record to boot. 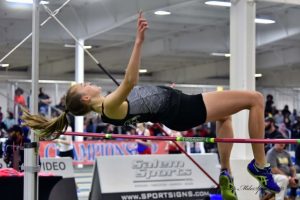 Sabatini’s win helped the First Flight girls place fifth in a field of 48 scoring teams. First Flight boys, with a first place finish in the 4×800 meter relay, placed among 54 teams in the meet that scored at least a partial point with more, like Currituck County, who did not score at all.

It was not the only Nighthawks state championship for the day nor was it the only new school record.

Finishing more than two seconds ahead of second place, Tyler Sylvia, Aidan May, Warner Campbell and Zach Hughes combined their talents to take first place in the boys 4×800 meter relay with a time of 8:26.14, just short of the 8:25.17 school record set in January at the Southeastern District Invitational meet. 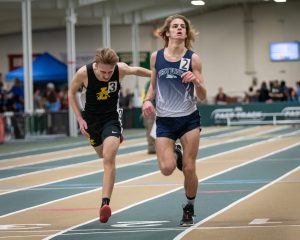 In a race that saw the first three finishers run faster than the previous state meet record set in 2018, First Flight junior Zach Hughes, right, finished second in the boys 1A/2A NCHSAA 1600 meter indoor state meet championships Saturday with a time of 4:24.91. Hughes beat Lincolnton’s Daniel Hopkins by a fraction of one second who finished third with a time of 4:24.97. Jason Thomson from North Lincoln was the winner at 4:21.11. photo by Dan Loughlin of NCRunners.com

Then, although they finished back in sixth place, the quartet of Jill O’Dell, Madison Pugh, Emma Byard and Maggie McNinch were still fast enough to establish a new girls 4×400 meter relay school record with their 4:24.96.

Another race of note included the boys 1600 meter run where the top three finishers were all juniors with times under the previous 1A/2A record of 4:25.45 set in 2018. Jason Thomson from North Lincoln was the winner at 4:21.11, while First Flight distance ace Zach Hughes was in second with a time of 4:24.91, just a fraction of a second ahead of Lincolnton’s Daniel Hopkins third place 4:24.97.