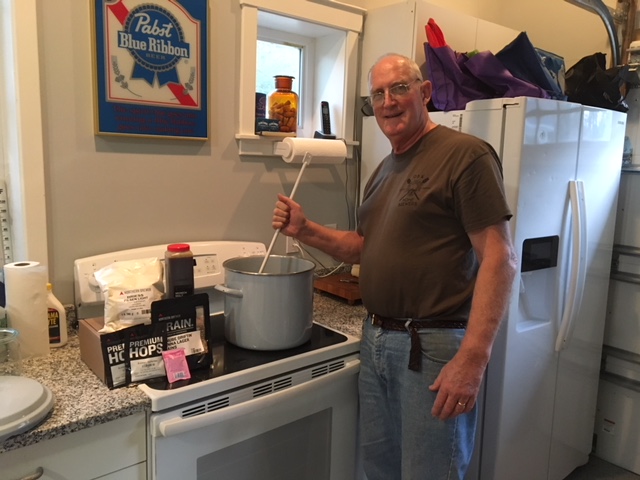 OBX Home Brewers membership coordinator George Berry works up a batch of beer in his home. Berry says it is easy to brew beer in your own kitchen and a new mentor program is available to help show people how. OBX Home Brewers photo

OBX Home Brewers announced recently that it has established a mentor program for area residents interested in learning how to make beer in their own home.

According to George Berry, OBX Home Brewers membership coordinator, making beer is easy and the mentor program was established to help anyone interested in making beer, but unsure of where to start. Berry said if potential brewers contact the group, a “brew buddy” is available to provide assistance in making that first beer batch.

Berry said that making beer in your home is fun, healthy, affordable and a great hobby. Home brewers also do not use many of the preservatives that commercial brewers put in their beers.

The 15 active club members are reported to make all kinds of beers, including light, dark, American, German, Belgian, English, Scottish, and many others. Members also make mead, a drink similar to beer but made with honey.

“We have beginners, intermediate and advanced beer makers in our club,” explained Berry. “This year we have 28 beers entered into the AHA National Homebrew Competition this spring, where our homebrews will be judged in 139 different categories.”

OBX Home Brewers is an association dedicated to the fine art of making beer at home and recognized by the American Homebrewers Association since 2013.

According to the AHA website, the first AHA National Homebrew Competition was held in 1979 at Boulder, Colorado, with 34 entries. In the 2018 competition 8,405 entries were judged with 1,203 entries advancing to the final round, making it the largest homebrew competition in the world.

For more information about OBX Home Brewers or to be included in the new mentor program, contact Berry at 703-473-0528 or georgeatobx@gmail.com.

In an Outer Banks Garden: Give them shelter