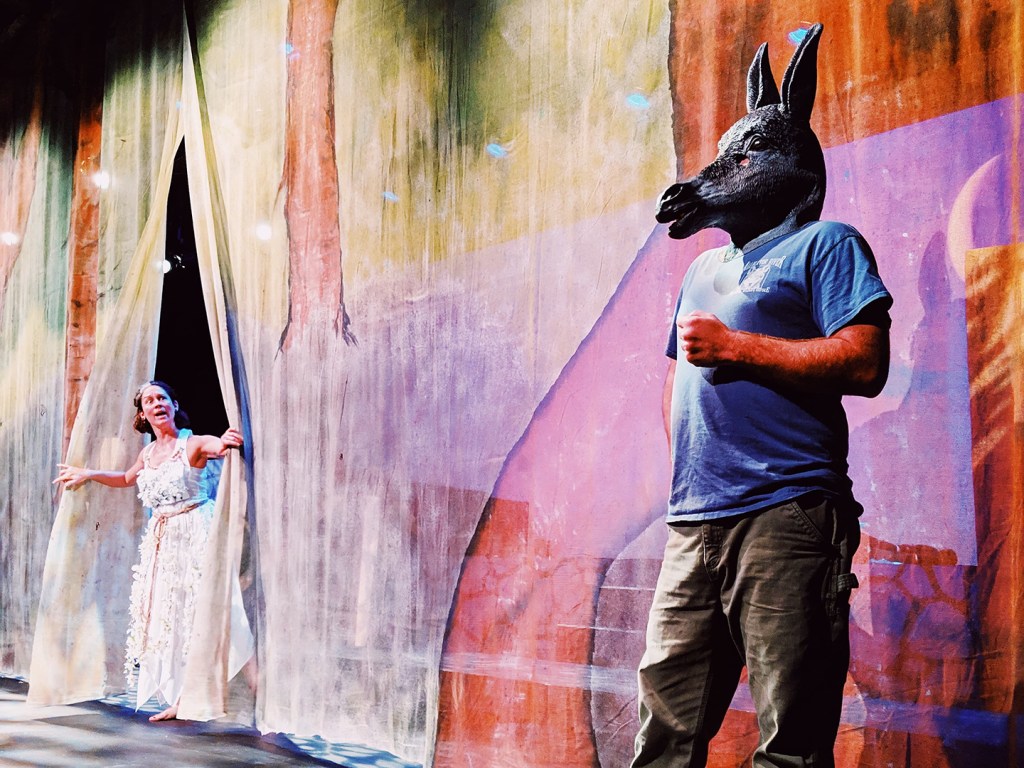 Queen of the Fairies Titania (Kelsey Thompson) falls in love with a transformed Nick Bottom (Shaun Olson) in Theatre of Dare's production of A Midsummer Night's Dream, on stage this weekend and next at Roanoke Island Festival Park.

In the original script for The Lost Colony, William Shakespeare asks Walter Raleigh to be allowed to set sail with the Roanoke Island colonists but is told by the explorer that he needs to stay behind and write plays.

More than 400 years later, the Bard will finally make the journey, as Theatre of Dare tackles A Midsummer Night’s Dream, now in its opening weekend inside the film theater at Roanoke Island Festival Park. It is the first full-fledged Shakespeare production in the community theatre group’s 28-year history.

“It seemed like the time was right,” said co-director Jimmie Lee Brooks III. “We felt like our actors were up to the challenge, and that our audience would appreciate the language and artistry of a Shakespeare play, especially a comedy like Midsummer, in a setting like Festival Park.” 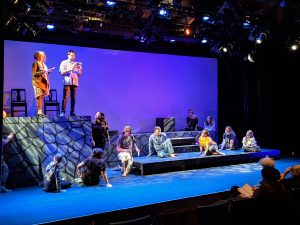 The cast of Theatre of Dare’s production of William Shakespeare’s ‘A Midsummer Night’s Dream’ rehearses inside the film theater at Roanoke Island Festival Park.

The play, one of the Bard’s most popular works for the stage, portrays the events surrounding the marriage of Theseus, the Duke of Athens, to Hippolyta, the former queen of the Amazons. These include the romantic entanglements of four young Athenian lovers and a group of amateur actors who wander into a nearby forest and wind up controlled and manipulated by the fairies who inhabit it. Throw in a magical love potion and a donkey’s head, and you’ve got all the ingredients of a wacky take on famous Greek legends.

“Some people might think that a Shakespeare play is all period costumes and poetic language, but when you boil A Midsummer Night’s Dream down, it’s really just a slapstick farce,” says Daniel Ziegler, who co-directs and plays the Fairy King Oberon in the production. “Maybe it’s something that Benny Hill or Monty Python would have done, had they been around in the 1590s.”

For the cast and crew, staging this production has been like nothing they’ve ever done before, from memorizing lines and monologues in Elizabethan English, to detailed set design and lighting, to period costumes that include everything from garments of Greek hierarchy to pointed fairy ears. “We’re doing our best to make this a spectacle worthy of the Bard of Avon,” said Brooks.

And it’s only fitting that Shakespeare, whom scholars say began his writing career about the time the Roanoke colonists set sail, would have one of his most popular plays performed on the island his countrymen settled, just yards away from a replica of the ship that brought them.

A Midsummer Night’s Dream debuted February 22 and next takes the stage February 23 and March 1 and 2 at 7:30 p.m., with Sunday matinees February 24 and March 3 at 2 p.m. Tickets are $12 for adults and $6 for students and all performances will be inside the film theater at Roanoke Island Festival Park, 1 Festival Park, in downtown Manteo. For tickets and more information, go to www.theatreofdareobx.com.

Eat and run: Bear gets a ride from Dare…