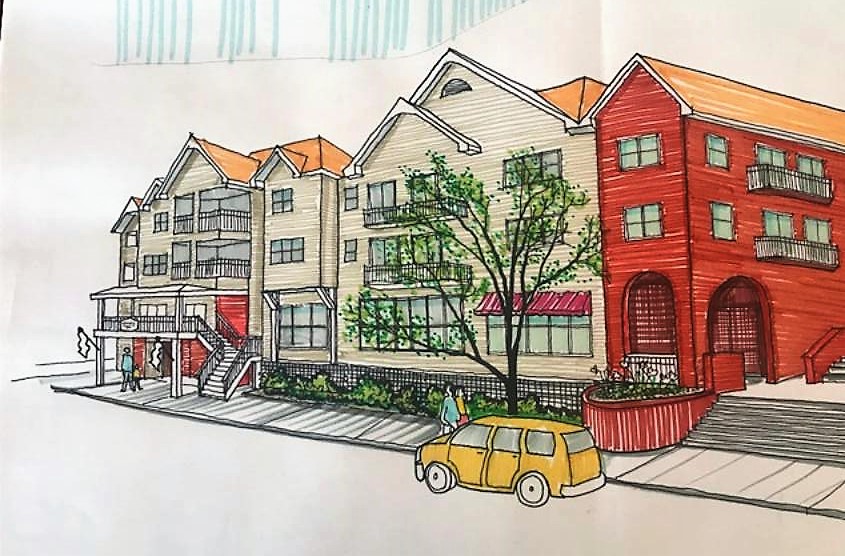 The Waterfront Shops and condos in Manteo will undergo a face lift, as shown in this design rendering. Plans approved by the Manteo Planning Board will allow the owners of the building on Queen Elizabeth Avenue to tear down an aging deck and replace it with street level landscaping.

On Tuesday night, February 19, the Manteo Planning Board breezed through their monthly meeting. With only two non-controversial agenda items and no one speaking during the public comment segment, the meeting from gavel to adjournment lasted only 15 minutes.

The planning board approved a plan proposed at the Waterfront Shops downtown to remove an aging deck. The mostly ornamental deck faces Queen Elizabeth Avenue on the front of the large commercial and residential building. Once the deck is removed, the plan calls for it to be replaced by street level landscaping and shrubbery. The planning board did suggest with a roof replacement soon scheduled, it would make sense to remove the deck and replace the roof before beginning the landscaping.

The only other action of the night was the approval of a planned accessory dwelling unit on property at 413 Devon Street. The board noted the town’s architectural review committee had recommended minor changes but only asked that the builder consider them without requiring the changes.

Manteo planner Melissa Dickerson briefed the board that she had contacted NC State to gauge interest in helping determine community wants and needs as the town works toward updating its 20 year plan. The plan is used as guide for future town development. Dickerson said the university could undertake the task in the spring of 2020. The Manteo Board of Commissioners will need to consider and approve the $50,000 cost before the university work is scheduled.

Lee Tugwell thought the planning board should consider setting up a workshop or subcommittee to begin discussing the update. He told his fellow board members with the consensus to obtain as much public input and interest for an updated 20 year plan, the sooner they started discussions the better. The planning board appeared to be in agreement with Tugwell.

An update on plans for additional informational meetings on the proposed Manteo Commons project was heard and concerns over the installation of brighter lighting at the CVS Pharmacy were voiced before adjournment.