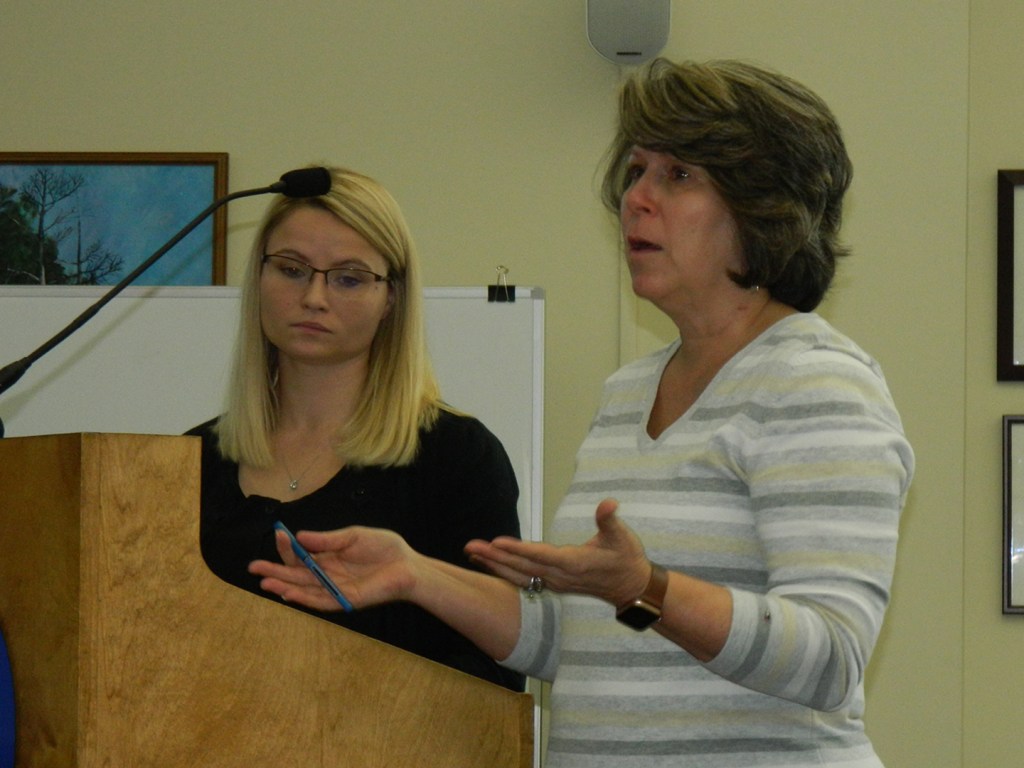 Samantha Eichhorn, left, and Ann W. Collier with Oakley Collier Architects in Raleigh provided Southern Shores Town Council with an assessment of town facilities during a special February 26 planning session. Repair and upgrade options ranged from $2.6 million for renovations and additions to Town Hall, Public Works and the police station to a little more than $5.9 million to replace Town Hall and surrounding buildings with a new center housing everything. Philip S. Ruckle Jr. photo

At council’s request, Oakley Collier Architects from Raleigh made a review of town facilities in order to help determine current condition, what is needed, what should be done and how to do it.

According to a presentation by Ann W. Collier and Samantha Eichhorn, on-site visual inspections were made at each of the five structures in September. Town Hall is the oldest structure at more than 30 years old, the Kern Pitts Center was built in 1996, followed by the police station two years later. The Pintail Court Public Works facility came in 2001 and the newest structure is the police training and storage building that went up in 2013.

Collier advised that most of the buildings are in decent shape but each has design flaws, space limitations and suffer general maintenance issues if not actual structure damage.

Collier and Eichhorn provided an overview of improvements needed at each site along with three options for site improvements.

“These options are a starting point,” said Eichhorn. “We start low and progress up from there with additional improvements.”

The final option would replace Town Hall, Pitts Center, police station and training/storage building with all four with a new center housing everything for a cost of $5,917,190.

Renovations and additions for the off-site Public Works facility have an additional $476,895 tag.

Each of the options addressed current parking issues at and around Town Hall with the second and third options utilizing the town’s vacant adjacent property on Skyline Road. Council took no action on the report other than agreeing to look at it again later.

A second unrelated presentation was a beach vulnerability report from APTIM Coastal Planning and Engineering of North Carolina, Inc., which calls for continued annual surveys. Also recommended is planning for re-nourishment of the Pelican Shores area along with adding sand to another three miles of beach in 2022 when other towns will be in the maintenance phase of their beaches.

In conjunction with the beach report, DEC Associates, Inc. provided financing options for the work.

The only action taken was to agree to future discussions and to authorize town manager Peter Rascoe to include payment for a June survey on the April agenda.

The other agenda item for the day included an update on construction for the new fire station.

Fire Chief Ed Limbacher advised he is on site every day and about 90 percent of the site preparation work has been completed.

He went on to add that after a review of the gate system, a proposed wooden swinging gate is being upgraded to a steel rolling gate at no extra cost for the upgrade.

It wasn’t the only good news.

Limbacher also advised that changes to the financing agreement for the new fire station by the lender will lower the original interest rate of 3.71 percent to 3.15 percent.

Attorney Robert Hobbs then walked council through several of the changes to the financing agreement, which was followed by a vote of approval.

“That was the best news of the day,” said mayor Tom Bennett when asked about the financing change. “No question.”

Bennett went on to say that council will need to continue discussions on beach nourishment and facilities repairs to determine when and what it wants done in relation to longer range planning.

“Beach nourishment will obviously have a shorter fuse,” he added.

Healthy Carolinians of the Outer Banks wants your input