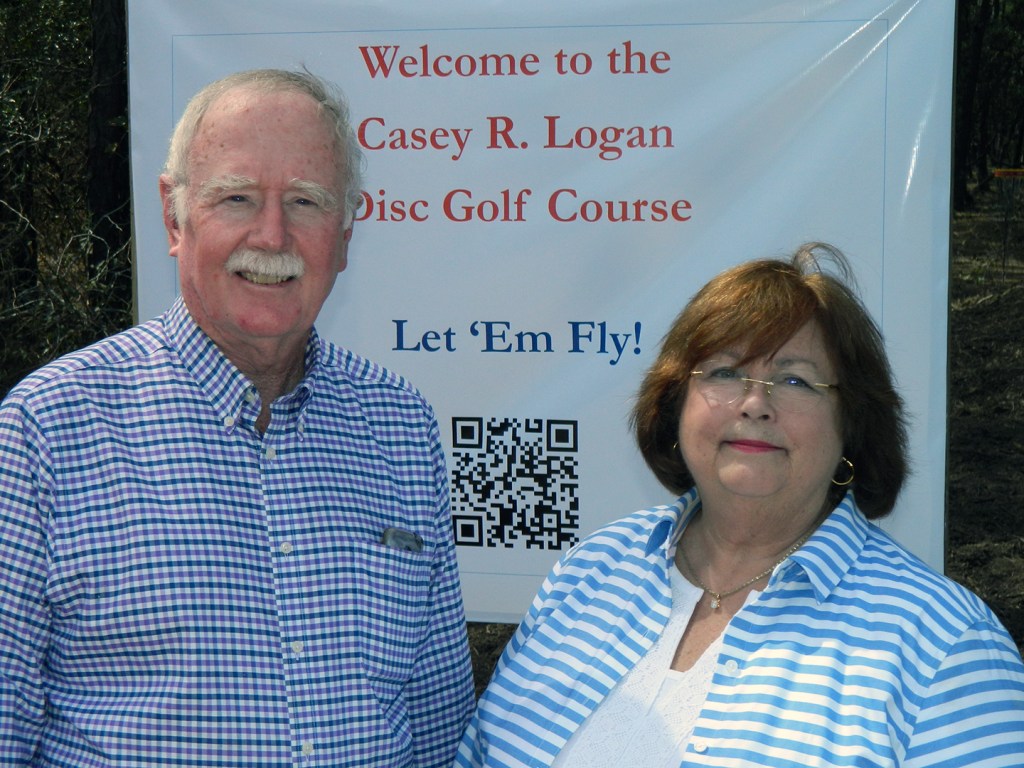 Dr. Lin Logan, right, and her husband Bob provided an initial donation toward building a disc golf course in Kill Devil Hills to be named after their son, Casey R. Logan, who was an avid disc golfer who died in his 20s. Philip S. Ruckle Jr. photo

More than one dream became reality last Saturday with the dedication of the Casey R. Logan Disc Golf Course in Kill Devil Hills.

As almost 200 people stood in the golf course’s gravel parking lot near the First Flight High School athletic fields, Daryl Davies talked about his involvement in building the first disc golf course on the Outer Banks.

Also part of the crowd were Dr. Lin Logan and her husband, Bob, who provided an initial donation toward building the disc golf course named after their son, an avid golfer, who died in his 20s.

“It’s been a challenge,” said Davies. “It was a lot of work cutting trees and hauling them out by hand. It took patience and time. But we wanted a great park. Not just a good park, but the best. We made it so that people would play it and want to come back.”

The idea of developing a disc golf course was not a new one and had been suggested even before it surfaced as part of a Kill Devil Hills Baum Tract Site Study Committee assembled in 2012 to explore how best to use the 44 acres known as the Baum Tract.

“It’s been 11 years since I first petitioned the town to build a disc golf course,” said Davies.

As part of the Baum Tract study committee, it appears Davies was in the right spot to continue pushing the idea.

After a March 2013 high school student presentation on disc golf received a favorable response, the Baum Tract Site Study Committee heard from professional disc golfer Lewis Hoffmann who explained the advantages of a disc golf course and, using a scaled down version of a disc golf basket, demonstrated some of the finer points of the sport as well as how he got involved.

“When the disc golf idea came up, the Logans approached the town,” explained Mayor Pro-Tem Mike Hogan, who chaired the Baum Tract study committee. “They made an offer of a sizable donation to get the thing started and have it named after their son who was an avid golfer.”

According to Dr. Lin Logan, she and her husband Bob had been looking for some type of memorial for their son. After reading an article in The Coastland Times that that disc golf was on the list of the ideas being considered for the Baum Tract property, they decided it was what they were looking for.

“This came up and it just took off,” said Dr. Logan. “The one thing that is so important is that it is free and open to everyone.”

Hogan said the study group and town commissioners both agreed that disc golf was something that would have the least impact on the land.

“It’s still a forest,” added Hogan. “And this is something that can last as long as you want it.”

Davies said blending in was a goal of those building the course right from the beginning.

“We made sure the course blended into the landscape,” said Davies. “That was a town goal from the beginning and we wanted it too.”

Davies went on to say that while he had help building the course from people like Mark Shelton, Bob Sanders, Marshal and Victor Pugh, Clayton Scarborough, Lewis Hoffman, Jared Hartleben, Chip Almoney and others, the disc gold course was really a gift from the town.

“I just helped push it through,” said Davies. “It is on very valuable town property and the town supports it, but it was built without taxpayer money.”

In addition to the physical labor required to clear the fairways, Davies and his crew solicited sponsorships from businesses and individuals to help cover the more than $40,000 it took to build the disc golf course.

Already in use prior to Saturday’s ceremony, Davies said also that the parking lot is almost always full and has been that way for almost a year.

“I get calls almost every day from people lost looking for the course,” added Davies. “Now that the town put up signs, that should help with the phone calls.”