Spring conditions are looking better and better in Ocracoke where Alan Sutton of Tradewinds Tackle says fishing has been good this week, with catches of puppy drum, black drum, sea mullet, bluefish and one flounder thanks to water temps in the mid-60s.

“A couple of big drum were caught on the beach and the boats found them and sight-casted right of the beach,” he said Friday morning. “The water here is warm and everything is ready to rock and roll.”

“There’s been one keeper flounder – that gives you the idea of the water temp!” Sutton said.

He said he won’t be taking part in the big Ocracoke yard sale Saturday morning because everything at his tackle shop is already for sale.

Up in Buxton, a cheerful Chris Burrus at Red Drum Tackle agreed that fishing has improved and water temperatures are around the mid-60s there as well.

“We’re getting big drum in the evening with the right tide and right wind,” he said. “We’re being invaded by bluefish of all sizes and sea mullet and blow toads for the table in good quantity.”

Burrus added that both puppy and black drum are moving in and out of sound.

Up at Avon Pier, Keith Matthews said he’s getting things ready around the pier so he can open on Good Friday, April 19 from 6 a.m. to 11 p.m. He’s worked there for 28 years and he’s ready for another. They’ll have their sunrise service on the pier Easter Sunday, April 21 at 6:10 a.m.

On the northern beaches, Jennette’s Pier has reported some decent catches all last week including one big bluefish, plenty of puffers and hard-fighting shad. 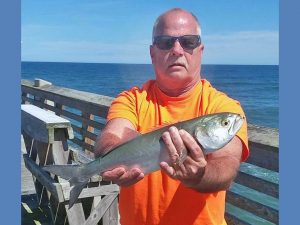 Donnie Cummings of Kill Devil Hills caught and released this big blue while jigging on the south side of Jennette’s Pier Wednesday afternoon. Courtesy Jennette’s Pier

Ron Robbins from Manteo has been taking advantage of fishing along with a few other anglers who have had to brave some chilly winds and water temps in the mid-50s. Jennette’s Pier is open 7 a.m. until 9 p.m. daily this time of year, including Easter Sunday. 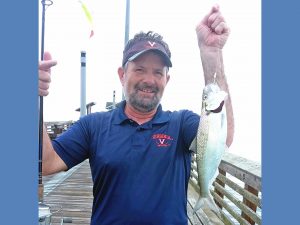 George Cecil of Roanoke Island caught and released this beautiful shad while jigging off of Jennette’s Pier Tuesday morning. The Virginia native was wearing his UVA gear the day after the Cavaliers won the National Championship in men’s basketball. Steve Fowler photo