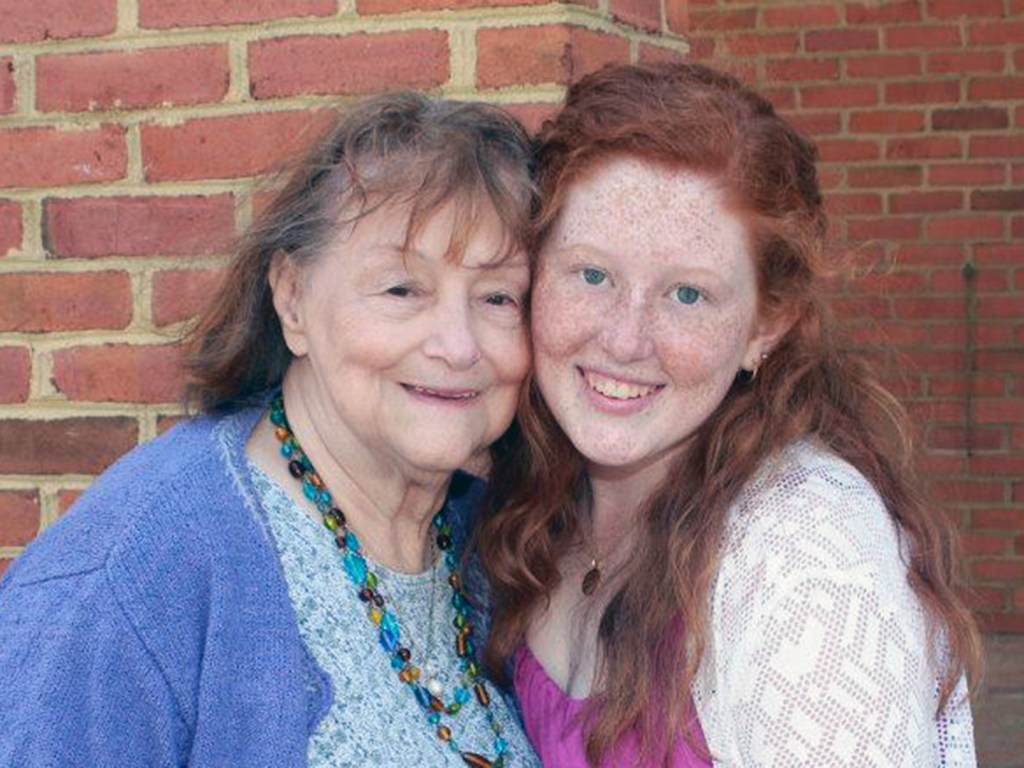 During the course of what seemed like an awfully long winter, I lost my original fishing partner, my mom Louise “Honey” Law, who passed away on Super Bowl Sunday, Feb. 3. We had held her hands earlier that day and recited the Lord’s Prayer while she slept peacefully.

She took me on my first ever fishing trip to the spillway of the reservoir dam on the Rivanna River in Charlottesville, Va. near my childhood home. We climbed down the rocky bank and sent our lines into the pool of water and waited, happy as clams.

Although I can’t remember for sure, I’d bet we used cane poles with red and white plastic bobbers that day with Eagle Claw hooks baited with worms dug from our own yard or garden. A neighbor, Eddie Huffman, was with us. His passion for fishing continues today; he works as an offshore charter boat mate out of Pirate’s Cove.

The inexpensive cane poles were either one-piece homemade ones or those two or three part ones that every country story sold back then with the line, hook and bobber all together for one price.

In and around my hometown, there were plenty of places to fish for blue gill, sunfish, creek chubs and bass. Eventually, mom and dad bought me a green, closed-face reel and rod at K-Mart so I could cast out far away from the bank.

I eventually started fishing the ponds in my neighborhood on my own, maybe with Eddie or Bobby Brown or my first cousins. But it was mostly mom who encouraged me to fish. I can remember her telling me if I caught a nice one to slip into my pocket and bring it home, so I did with a bass from the Huntington Road pond one glorious afternoon.

Because we had a cottage in Avalon Beach, it didn’t take long before I was casting off the pier there with that same inexpensive reel. And sure enough, when I hooked something worth talking it about, it stripped my line and was gone in a flash. The gears stripped too, I guess, because it didn’t work too well after that.

So it was either Christmas or my birthday in late May when dad, Ralph Law, stepped up to the plate and bought me my first real reel – a lefty Mitchell 301 he special ordered from the Downtown Athletic Store or “DAS,” as it was called. The shiny black spinning reel was the best I had ever seen.

He was a total ball and court sport nut, but as for hunting and fishing, it just wasn’t his thing. At the time of his death, a little over a year before mom’s, he probably could have recalled every important major league baseball stat you could pitch him and then some.

He loved football with a passion, coached little league basketball for decades and made his mark in life as a swim coach first at his high school alma mater Granby in Norfolk before being called up to the big leagues – University of Virginia – around 1960.

I played hundreds of touch football games with him and even more sandlot baseball innings, but I never once saw Dad swim a lap in any of the seven or eight country club pools he coached at in my youth.

While Dad taught me to play, love and win ball and court sports and relish watching Redskins games on Sundays, it was Mom who encouraged me to fish and later try boating and camping.

Not bad for a college professor at a prestigious all women’s college in Lynchburg called Randolph Macon back then. She didn’t watch much television and certainly not sports.

Anyway, when we got back down to the beach bungalow on the next ensuing vacation, I took that nice Mitchell reel up to Avalon Pier and had a fine day of fishing and catching.

I used that reel hundreds of times; I learned how to take it apart and clean it, lube it. Somewhere along the line, we parted ways. Decades later, however, I bought a used righty Mitchell 300 at a yard sale just because I could.

In addition to mom’s Norfolk side of the family, her people were also from Trotville in Gates County, so crappie fishing was something they liked to do. Uncle David took me early in the morning several times to Tull’s Creek where we would fish eight cane poles at one time from his prized jon boat. He always had ice-cold soft drinks along with nabs, Vienna sausages and potted meat for refreshments.

I never knew exactly where or when this happened, but mom had always told a story about when she caught an alligator gar somewhere in northeastern North Carolina. She said when she reeled it up to her feet and saw the prehistoric looking monster with teeth and all, she threw her entire rig as well as the animal into the drink and ran. They are fairly ominous looking.

When mom died back in February, she had many of her belongings packed up and ready to go back to the beach to live out her remaining days in her house off West Third Street. Unfortunately, several falls and the return of cancer kept her from her dream of being back in Kill Devil Hills with pier fishing, gardening and grandchildren in mind. 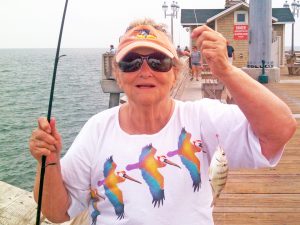 Louise D. Law with a small pinfish she caught her last time pier fishing back on Aug. 29, 2012.

The final two times we went fishing together were both at Jennette’s Pier. Once after the rebuild, the other on the old wooden pier. Boy did we laugh when the Styrofoam cooler busted at the seams as we were walking out on the old pier to get set up several decades ago.

As my kids and I were going through her attic back in Charlottesville the other day, we found her royal blue, small plastic tackle box. Inside were some trout jigging lead heads and soft plastics. I must have given her those, because I’m pretty sure she always fished on the bottom. In fact, inside an old Roses brown paper sack was a standard double bottom rig. In the trays were both rounded river weights and salt water pyramids. A knife with a wooden handle and other tools were in there too.

And in one of life’s crazy ironies, in his final days, my dad seemed obsessed with what people were catching on Jennette’s. It was the first thing he would ask me every conversation. “What’s biting today?” The last time he visited, we ate breakfast at Sam and Omie’s just as he and his dad had done many, many years before.

In addition, to top everything I thought I knew about Mom, she became an avid UVA basketball fan during the Tony Bennett era and watched the games on TV (and westerns) like a true veteran.

Turns out she and other retired college professors like Shamin and friends such as “the other Louise” were calling one another during game breaks to discuss how great the team was playing and how great coach Bennett looked or something along those lines.

Given that the Cavaliers captured the NCAA national basketball title Monday night, I’m sure both of my UVA grad school alumni parents are beaming orange and blue from heaven above the Blue Ridge Mountains overlooking my hometown.