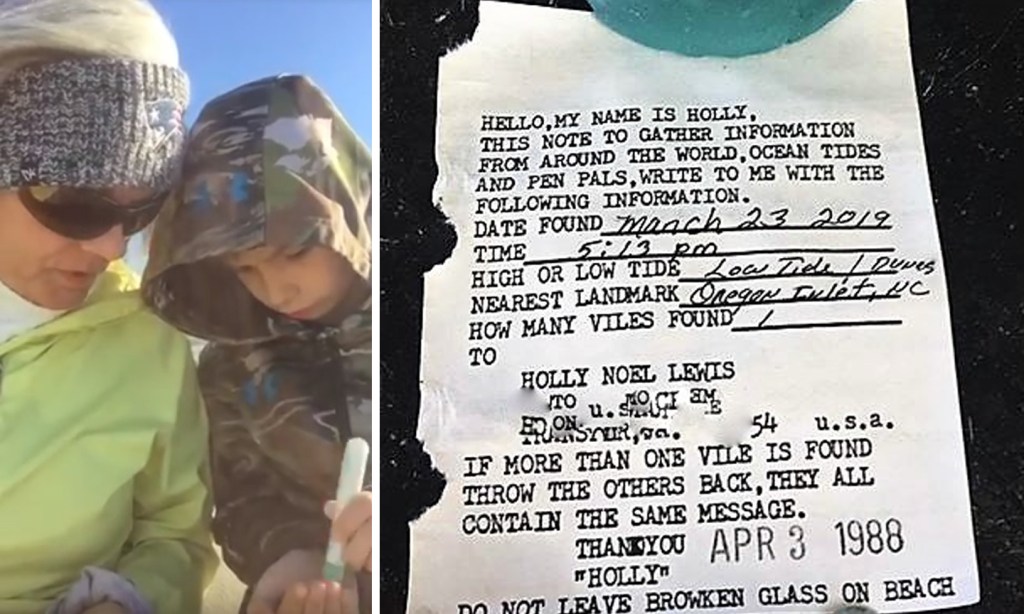 Laura Peets, leftl and her grandson Gabriel opening the vial. The note it contained is on the right. Courtesy Laura Peets

A solitary walk along the beach turned into a day of discovery and a quest to connect with a long ago memory. Laura Peets said she was on the beach near Oregon Inlet shell collecting and doing some serious soul searching, “talking with God.” She couldn’t know that her discovery that day would lead to a search of a different kind.

The late March day was cold, but bright and sunny. The ocean was calm and dolphins were swimming and frolicking in the surf. It was a welcome change to past weeks of bad weather. Only the amount of trash, washed up by recent storms, spoiled the otherwise enjoyable scene.

There was far too much trash to pick up. Instead, as Laura recalled, she began photographing the litter. Then she spotted it: a test tube-like vial among the trash. At first, she was disgusted at the thought of what the vial might contain. It was only when she looked closer that she saw the words, “note inside.”

The note inside and what it revealed would need to wait. Laura wanted her grandson Gabriel to share in the experience with her. The next day, Laura and Gabriel traveled to a beach near Oregon Inlet. The vial wasn’t easy to open, but with perseverance they managed to break the seal and fish the message out. It was a message over three decades old. A request for information.

The note that had remained undiscovered for 30 years, 11months and 20 days read: “Hello My Name Is Holly. This Note To Gather Information From Around The World, Ocean Tides And Pen Pals. Write To Me With The Following Information.” The note went on to ask for the when, where and ocean tides, when the vial was found and included a Pennsylvania address to send the information.

Laura couldn’t believe she had found the long-lost message and she wanted to know more. She began an internet search. It turned out Holly, the message’s author, was 11 at the time. “I was so excited to find her,” she said. Sadly, a further search found an obituary. Holly had passed away 10 years ago after a hard-fought battle with cancer at age 32.

Laura continued to seek information and found that Holly’s mother still lived in the Pennsylvania town that was listed on the message. She sent her a message. Laura wanted to let her know that Holly’s legacy is alive.

Cheryl Lewis, Holly’s mother said, “Oh my God, I was totally shocked,” when I learned that Holly’s message had been found, it had been so long. It was “amazing and it made my day when it happened.”

Laura learned from Cheryl that in 1988, Holly along with a young friend, with the help of Holly’s aunt, filled and sealed the vials – hundreds of them – and tossed them into the sea. They tossed some from the Outer Banks Pier and others from the catwalk on the Bonner Bridge that spanned Oregon Inlet.

Holly got one message back. Her friend got more. But that was in the first year. After that, the return of messages stopped. Perhaps the vials were drifting in the sea or buried under the Outer Banks sands. When Laura found the message on March 23, it brought a past memory for one family, a new memory for another and a shared memory for both. Holly’s legacy in a bottle had been discovered once again

For Laura, that soul searching walk led to an unexpected discovery and a reflective journey into the legacy of a small girl who tossed a message into the sea. Laura said, “amongst the trash you will find treasure if you look at it with a different eye.”