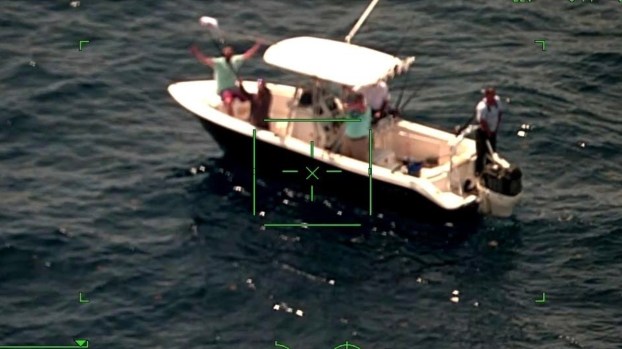 The crew of a Coast Guard HC-130 Hercules search and rescue aircraft spots boaters who activated an Emergency Position-Indicating Radio Beacon after their boat lost power approximately 22 miles east of Hatteras Inlet on May 11. The crew of the HC-130 dropped a radio to the boaters and then circled overhead while a 47-foot Motor Lifeboat crew from Coast Guard Station Hatteras Inlet took the boat in tow and returned them to Hatteras Inlet. Coast Guard photo courtesy of Coast Guard Air Station Elizabeth City

Watchstanders at the Coast Guard’s 5th District in Portsmouth, Va. received an Emergency Position-Indicating Radio Beacon alert of a vessel possibly in distress 22 miles off the coast of Hatteras Inlet.

Coast Guard watchstanders confirmed the owner of the vessel departed on a fishing trip earlier in the day when they reached a relative who was listed as a contact in the EPIRB’s registration.

The crew of an HC-130 Hercules search and rescue aircraft was diverted to the EPIRB’s location while the crew of a 47-foot Motor Lifeboat was dispatched from Coast Guard Station Hatteras Inlet.

Once on scene, the HC-130 Hercules aircrew spotted the boaters in distress and were notified by a nearby Good Samaritan that boaters had lost power and were unable to communicate.

The crew of the HC-130 Hercules dropped a radio to the boaters and then circled overhead until the rescue boat crew from Station Hatteras Inlet took them in tow and safely returned them to Hatteras Inlet.

“EPIRBs are a powerful safety tool, especially when used in conjunction with lifejackets and a communication device,” said Lt. j.g. Catherine Taylor Pravia, command duty officer at the Coast Guard’s 5th District command center. “This case illustrates how EPIRBs can expedite a case so rescuers can reach those in need faster and more accurately.” 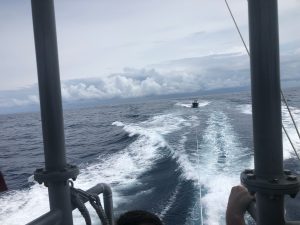 Beginning Monday, May 13, several amenities at Kill Devil Hills Aviation Park will be temporarily closed while enhancements are being... read more

Demolition starts for new College of The Albemarle building