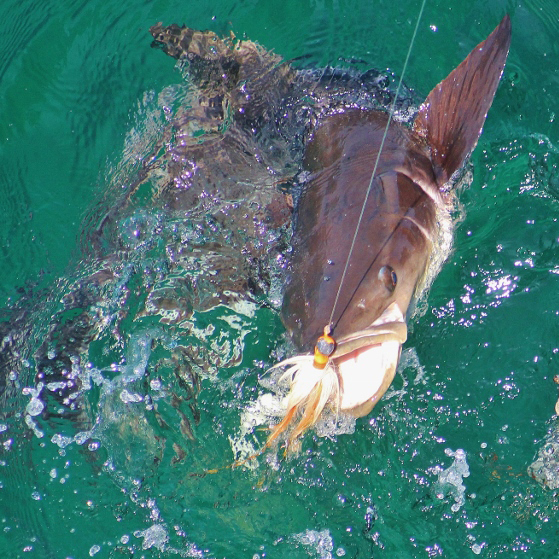 Cobia fishing has heated up and there’s a tournament this weekend sponsored by Oceans East. Susan Dotterer Dixon photo

Another week of fishing has come and gone as we creep closer to summertime. In general, fishing has been good all along the Outer Banks. It’s a great time of year to go cobia fishing and the guys and gals who are racing to open Oceans East have scheduled a tournament to coincide with the bite.

Justin Wilson, one of the owners, said they hope to open their new bait and tackle shop, located in the old Whalebone building on the Nags Head-Manteo causeway, this Thursday or Friday.

According to him and the company’s website, the Oceans East Cobia Tournament kicks off with a captain’s meeting at the nearby Basnight’s Lone Cedar Cafe Friday, May 17 at 7 p.m. Tournament fishing is Saturday and Sunday, May 18-19. For details, go to oceanseastfishingtournaments.com. 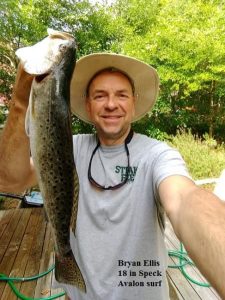 Across the way at Jennette’s Pier in Nags Head, security guard and greeter Billy Baugh said folks were catching all sorts of fish on Monday.

“Everyone was catching (sea) mullets and blues,” he said Tuesday morning, “but no one was catching them off the end. All the action was around the second and third shack.”

Tuesday morning, the bite continued with sea mullet and bluefish. Johnny Williams of York, S.C. was working the surf zone close to the pier house Tuesday morning. He had decked three keepers. 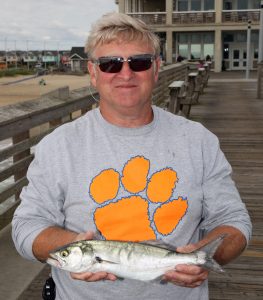 Johnny Williams of York, SC holds a nice bluefish he caught while jigging with a traditional orange and white Got-Cha plug on Jennette’s Pier in Nags Head Tuesday morning. He decked three of them by 10 a.m. Courtesy Jennette’s Pier

The day before, fishing with his wife, Williams said they had caught two dozen sea mullet, or “whiting,” as he called them. The couple had plans to cook up the mess of fish later this week. For lunch Monday, they said they had a great meal at O’Neal’s in Wanchese for some shrimp and fish of the day.

Down at Hatteras Harbor Marina Tuesday morning, a cheerful Sheila Ballance answered the telephone. She reported “good fishing on the beaches for Spanish mackerel and cobia along with blues and red drum.”

“Offshore, gaffer dolphin fishing is good, with wahoo, yellowfin and blackfin tuna in the mix,” Ballance said. As for bottom fishing, there’s been plenty of “triggerfish, vermillion snapper, grouper, tilefish – pretty much everything including a small king mackerel!”

Jumping across the inlet to Ocracoke Island, Alan Sutton of Tradewinds Bait and Tackle was busy helping anglers in his shop but gave a condensed version of what’s going on.

“On the beaches sea mullet, blues, one or two pompano, flounder and puppy drum,” he said. “Inshore cobia, Spanish and king mackerel. Offshore, the dolphin fishing is picking up good!”