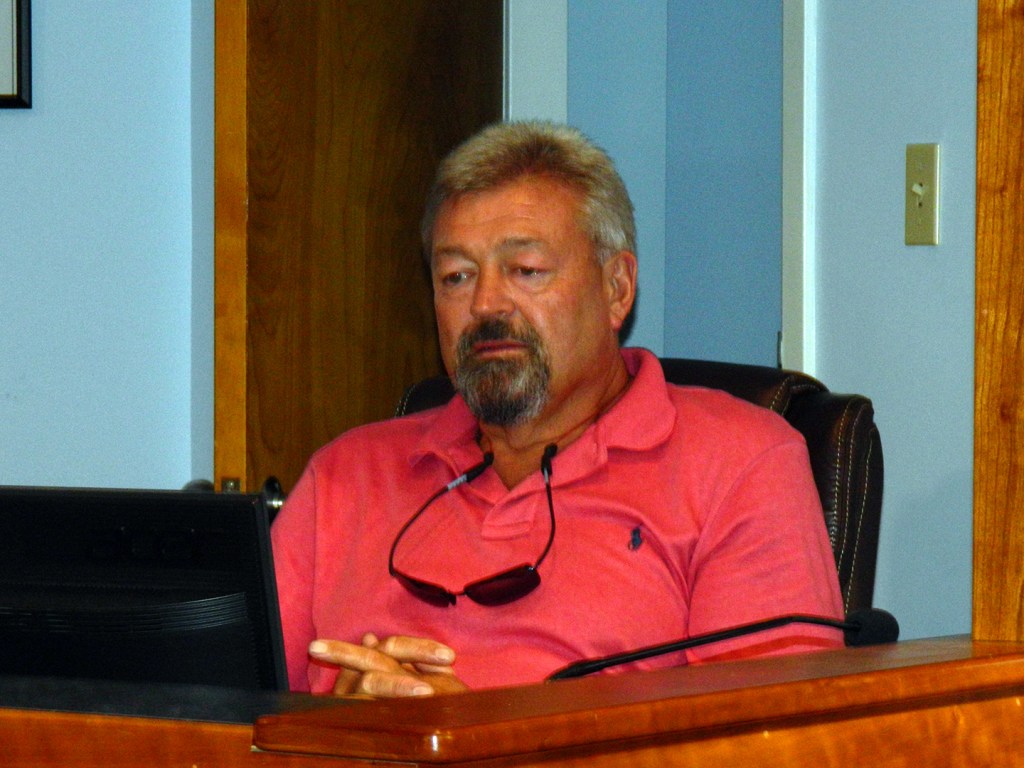 Assistant Kill Devil Hills town manager Shawn Murphy gave a brief review of the town manager’s recommended $19,477,879 budget for the 2019-20 fiscal year during the board's May 13 meeting. A budget workshop on the budget is scheduled for 8:30 a.m. on May 20 and a public hearing on the budget is set for June 10 at 5:30 p.m. Philip S. Ruckle Jr. photo

Actions during the May 13 Kill Devil Hills Board of Commissioners meeting included changes for telecommunication services and towers within the town, a First Flight Hotel site plan change and presentation of the town manager’s recommended 2019-20 budget.

Opening the meeting with two related but separate public hearings, commissioners first approved a Chapter 153 amendment for electrical and communication services and then voted to approve changes for telecommunication towers, also in Chapter 153.

The code changes are intended to clean up and modernize the language for communication services to meet current technology and specify new guidelines and dimensional requirements for monopole tower setbacks.

Planning director Meredith Guns advised that while the two changes are related, they are in fact different in that one incorporates technological advances over the past 20 years and the other deals with structures. In response to commissioner Skip Jones asking if the board really any choice in the matter, Guns explained that although there is not much that can be done with poles already in place, the town does have a say in the placement of new poles.

Town attorney Casey C. Varnell advised also that while the FCC is pushing the changes and that there are in fact limits to what can be done, most of the changes the board approved focus on city-maintained streets where local jurisdictions still maintain some control.

Moving on to old business, Guns provided a brief review on updates to the town’s special events guidelines for charitable events.

Earlier this year, the board asked staff to look at guideline changes for special events that might streamline the application process and open the door for more of them.

Guns brought a short list of changes for review based on previous board members’ comments seeking additional guidance on incorporating the changes requested.

Included in the summary are:

– Allow businesses to use 10 percent of the required parking for a special event while remaining open for regular business;

– Allow businesses to have outdoor sales (similar to yard sales) with town approval during other community events (such as bike week, car shows, marathons, etc.).

– Allow use of 10 percent of the required parking without disruption to regular business hours for charitable or non-charitable events with a business location limited to four times per year and no more than five consecutive days;

– Modify the application for simplicity, including instructions and adding “if applicable” to each line item.

Guns pointed out that the recommended changes will not allow non-charitable events except as approved by the Board of Commissioners.

Guns added that there is no record of any special event application being denied and that a four event restriction on applications is on event organizers, not the location. That means there could four or five large events in addition to the four charitable ones for eight or nine events at a location.

A draft ordinance is planned for review in June.

The first of several New Business items saw the board give local engineer Mike Robinson a green light for changes to the First Flight Hotel site plan.

The original site plan for the project at 2029 South Virginia Dare Trail was approved by the Board of Commissioners in November. The changes include a swimming pool with a snack bar and covered deck, pool storage, restrooms, elevated dune decks, a beach walkover and other related site improvements.

In related actions, Jason Self, a Kill Devil Hills Board of Adjustments alternate member, was appointed to a regular seat on the board to fill the vacancy created when Robert Rollason II resigned from the board. That appointment created an alternate vacancy and Dillon Heikens was named to fill that alternate position.

After previous discussions on creating an ad hoc committee to review recreational sites west of U.S. 158, the board voted to move forward with establishing it. Once in place, members are to submit general and site-specific recommendations on promotional ideas, policies and best use strategies.

During discussion on committee size, commissioner John Windley said he favored soliciting applications to first see how many come in and then determine a committee size.

After Mayor Sheila F. Davies explained that she thought between seven and nine to be best, with less being too small and larger too cumbersome, the board eventually reached a consensus to have seven with applications due by Friday, June 14. Action on applications is expected at the July meeting.

Within the 103 page document, town manager Debora P. Diaz recommends a $0.0191 increase to the town’s current ad valorem townwide tax for a total tax rate of $0.40 per $100 real property valuation. The Beach Erosion Control and Flood and Hurricane Protection Works Municipal Service District tax rate for real property remains at $0.33. Money collected from the MSD must be used there.

Total General Fund revenues for the fiscal year beginning July 1, 2019 and ending June 30, 2020 are projected to be:

Total General Fund expenses for that same period are projected to be:

Other business for the evening included a proclamation designating May 15 as Peace Officer Memorial Day and the week of May 15-18 as National Police Week. The board also approved a meeting schedule change due to a runoff in the Republican primary to succeed the late U.S. Representative Walter Jones Jr. set for Tuesday, July 9 in the Town Hall meeting room. To accommodate the team that sets up the room for the election, Davies asked that the July meeting be moved from Monday, July 8 to another date. The board agreed to meet later in the same week on Wednesday, July 10.

Before leaving, the board also approved minutes from its April 24 meeting, a sponsorship agreement for in-kind donations at the disc golf course with Daryl Davies, heard a Neighborhood Watch update from Coleen Almoney and a Community Appearance Commission update from Sue Kelly.