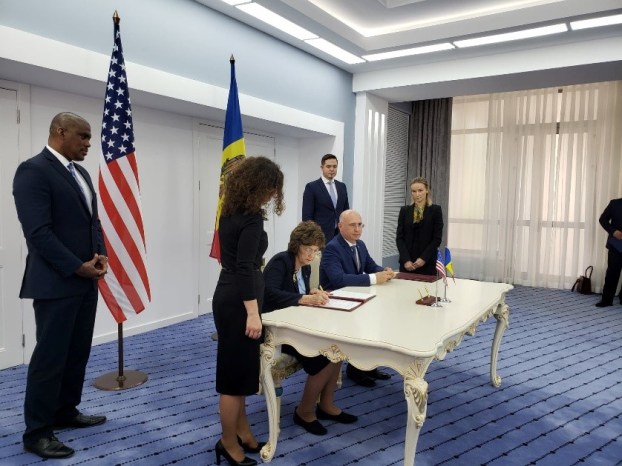 North Carolina’s partnership with the country of Moldova took center stage this month in Moldova with the signing of the fifth five-year bilateral agreement between North Carolina and the Eastern European nation.

The agreement was signed during a ceremony in the capital city of Chisinau by NC Secretary of State Elaine F. Marshall, who co-chairs the North Carolina/Moldova Bilateral Committee; Moldova’s Prime Minister Pavel Filip; and Moldova’s Minister of Foreign Affairs and European Integration Tudor Ulianovschi.

Governor Roy Cooper signed the document before it left North Carolina and Secretary Marshall traveled to Moldova representing the state. 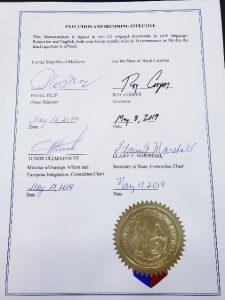 The bilateral agreement between North Carolina and Moldova. Courtesy NC Secretary of State

“North Carolina and Moldova have been international leaders in demonstrating the mutual benefits of a strong, cooperative partnership,” Gov. Cooper said. “On behalf of the people of North Carolina, I’m honored to renew this bilateral partnership with Moldova and look forward to the future progress to come.”

The agreement outlines goals for the many cooperative programs between North Carolina and Moldova and encourages them to continue their commitment to coordinating academic, economic and cultural exchanges.

“Each of these exchanges between North Carolina and Moldova has been a powerful lesson in the role that people-to-people diplomacy can have in peace and international understanding,” said Secretary Marshall. “We have accomplished so much over the last 20 years, with some truly inspiring projects and work done by North Carolinians that will have a lasting impact on this partnership.”

Exchanges between North Carolina and Moldova have included the North Carolina Area Health Education Centers’ (AHEC) initiative to give Moldovan health care providers access to more than 350,000 medical publications and journals, and cooperative efforts by Rotary Clubs around the state, the Moldova World Children’s Fund, the UNC-CH Schools of Dentistry and Pharmacy, the UNC-Greensboro School of Nursing and the NCSU School of Agriculture.

Secretary Marshall led a delegation from North Carolina that met with Prime Minister Filip during the trip, as well as U.S. Ambassador toMoldova, Dereck J. Hogan.

The first bilateral agreement was signed in 1999 to formalize North Carolina’s partnership with Moldova, forged through the NATO Partnership for Peace, which paired states in the US with former Soviet Union republics. The N.C. National Guard State Partnership withMoldova began in 1995 and is one of the longest running in the U.S. Department of Defense.

Column: An alliance of the heart binds NC and a poor nation