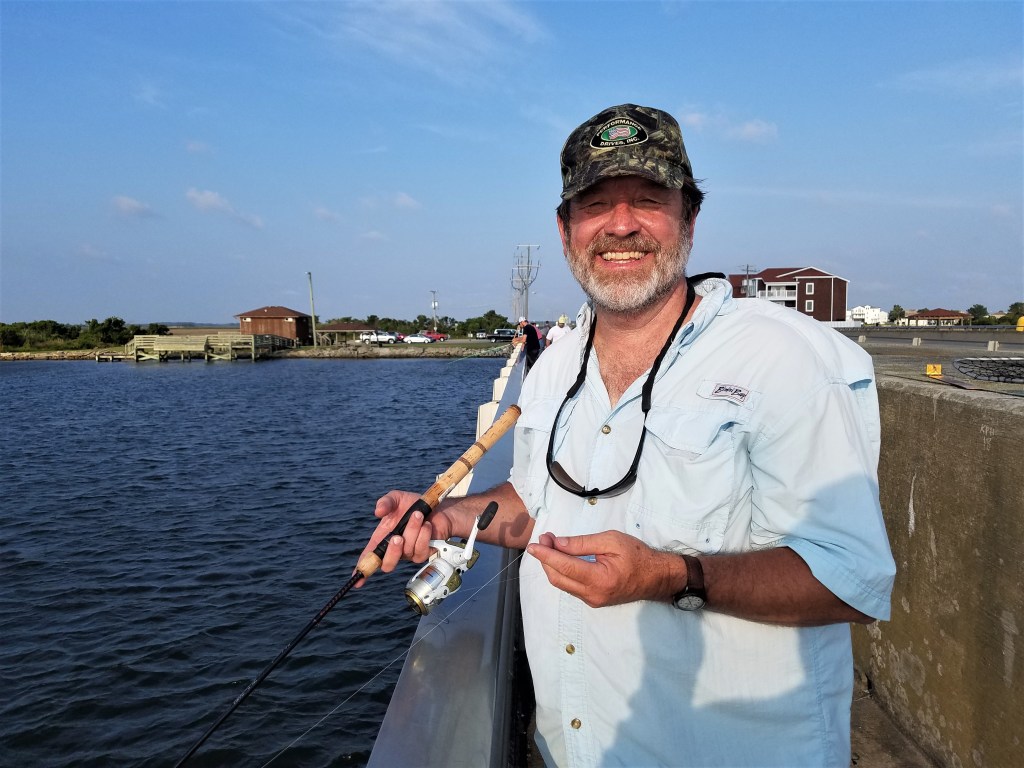 Greg Tucker of Bristol, Va. prefers to use live bait on a Carolina Rig when fishing for trout from the Melvin R. Daniels “Little Bridge” on the Nags Head-Manteo causeway. Daryl Law photo

A dozen cars and trucks were parked at the Melvin R. Daniels “Little Bridge” early Thursday morning when I arrived to try my hand at jigging for trout.

It’s a beautiful morning with song birds singing and strong winds coming from the southwest. Out on the catwalk, fishermen are giving it their best, casting south and slowly retrieving their lead heads and soft plastic tails. 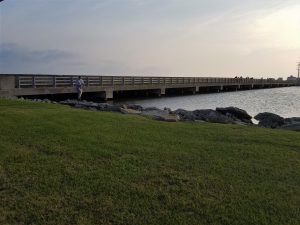 People fish for free on the Melvin R. Daniels “Little Bridge” pretty much every day of the year. Daryl Law photo

A few casts in, I notice someone down the way reeling one in and then grabbing a long handled net. He scoops it up and retrieves his rig. I didn’t see him throw it back, but later he said it was too close to 14 inches to keep. I later learn his name is Greg Tucker.

The shrill cry of an osprey breaks the silence as he fishes from well above our heads. I know this is a great sign because when beach fishing back in my neighborhood, they’re always around when the fish are too.

Across the bridge on the other side, a young lady shrieks with delight as she gets her photo made with a small trout.

Back on my side, a lone angler on a center console outboard boat motors up several hundred yards south and he appears to be fishing for trout too. Later, a Carolina Skiff loaded with fishermen also works the area.

A man arrives without any equipment and asks: “Getting anything?”

He has a Nags Head Fishing Pier paper pass from that morning stapled to his ball cap and he was wearing a gray Outer Banks Stay Salty hoodie. Next, another man was heads the opposite direction on the narrow catwalk; he has a bunch of gear and what appears to be two nice-sized trout in a plastic bag.

“Yeah, I got a couple,” he said. “I caught (and released) 15 stripers too.” Turns out he had been there since 3 a.m. said some other guys who had caught a couple small ones that morning. 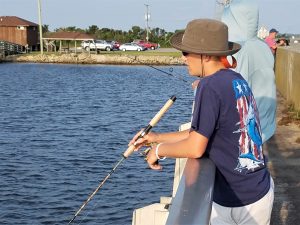 I make my way down to the guy with the long-handled net, Tucker, who casts out into the coffee-colored sound water.

“Most guys reel too fast,” he said. “If you watch the ones who catch ’em, they reel real slow.”

Turns out he wasn’t jigging at all; Tucker, of Bristol, Va., was live-bait fishing with a Carolina Rig and mud minnows. As for the one he caught when I first arrived, he threw it back because it was only a hair over the legal limit.

His rig was simple: an inline egg-shaped sinker slides freely above a snap swivel that has a 10 to 12 inch long leader tied to what looked like a black circle hook. 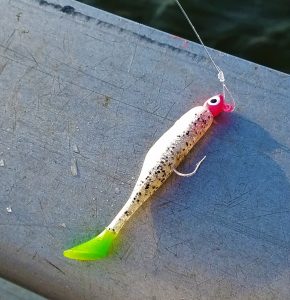 A basic lead head and soft plastic tail is all you need when jigging for trout. Daryl Law photo

Tucker said Bristol, a town right on the Virginia-Tennessee border, was a little more comfortable temperature-wise than here in the summer months.

Just like most anglers one meets on piers or other public fishing areas, he didn’t mind talking while we fished. Turns out, Tucker’s been coming to the Outer Banks for 30 or 40 years. The CPA said, “It might be longer than that.”

Finally, someone near us catches a “dink” and throws it back. Tucker puts a fresh minnow on and casts it out a little ways. He holds his line in between his thumb and forefinger so he can feel the bite.

We get to talking about work, our families and the cost of a college education these days, which leads us both to reflect on what’s ahead with our own daughters.

His is set to graduate next year; mine graduates next week!

Tucker says he’s already dreading the day she leaves and my heart sinks a bit. Life is sure to change for both of us. At least I have my son and heck, he likes fishing, too.

His daughter is headed to James Madison University in Harrisonburg, Va., which is better known simply as JMU. My daughter has picked UNC-Wilmington and marine sciences.

We talk about the costs associated with the different schools and how much each of our respective colleges cost back in the day. Should I get her a car or skip it the first year? We both wonder if they will visit home much that freshman year.

With all of the talk about money and tuition costs, I realize it’s time for me to go to work and unfortunately, I leave without feeling the thrill of the catch.

But one thing is for sure, thanks to Tucker and the rest of the guys, I did have fun fishing that morning!