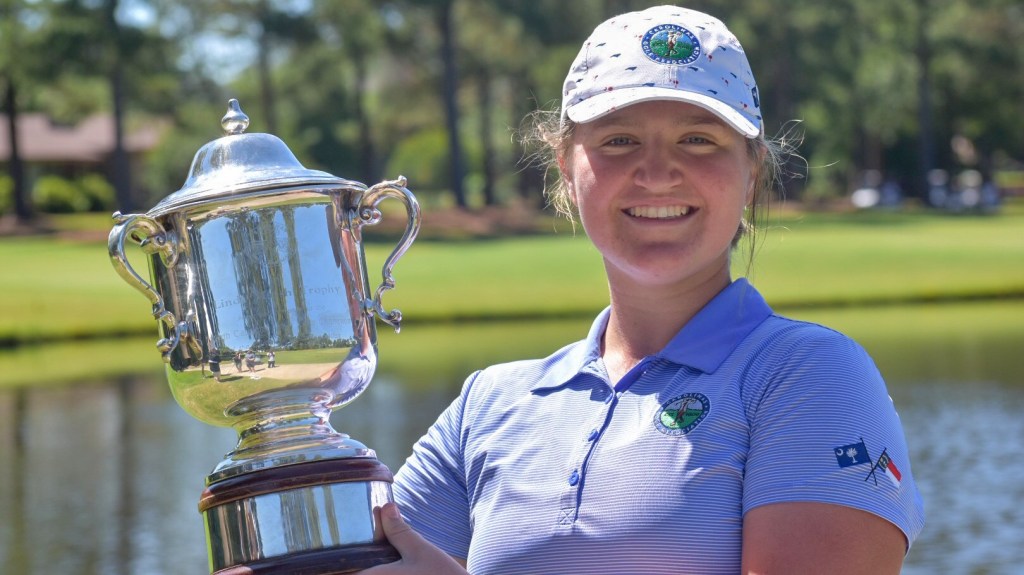 Friday began with semifinal matches in the morning. Schuster needed all 18 holes to defeat her semifinal opponent Deborah Spair of Raleigh. The match was back-and-forth all morning and it took a birdie on the 15th for Schuster to go one up in the match. Pars down the final stretch were enough for Schuster to advance to the final match after defeating Spair two up.

The second semifinal match pitted number two seed Maria Atwood of Holly Springs against Riley Hamilton of Reidsville. Atwood was in control of the match for most of the morning, but faced a tough challenge from Hamilton in the final stretch. Atwood was four up in the match after hole number 10, but Hamilton rallied to make birdies at numbers 11 and 12, then two clutch pars at numbers 15 and 16. Atwood was one up going into number 17 and was able to make two finishing pars to keep her lead and win her semifinal match one up.

“I had to play a lot of good golf because Riley was playing really well. We both were playing well. Both making a lot of birdies and trying to hit good iron shots, getting it close and then making the putt. I wanted to have fun today. I’m proud of myself for making it this far so I’m just happy to be here,” said Atwood.

The match began with back-to-back bogeys from Schuster to immediately give Atwood a two up lead heading into the third hole. Schuster made birdie at the 169-yard par 3 third hole after a close approach to under 10 feet and cut Atwood’s lead in half. Another birdie on the dogleg right fifth hole tied the match. Schuster took her first lead in the match after a chip-in from the front of the ninth green for birdie and she never looked back.

Schuster confidently stepped on the tenth tee and striped it down the fairway. She went on to win numbers 10, 12, 13 and 14 to claim a 5&4 victory in her match and hoist the Linda Marsh North Carolina Junior Girls’ trophy.

“I have not even soaked it in yet. It’s pretty cool. This is my first ever official CGA win, so it’s a great one to have and I’m so excited to be part of the Carolinas Team again this year for the Mid-Atlantic Girls’ Matches,” said Schuster. The North Carolina Junior Girls’ Champion earns an automatic exemption to the Girls’ Mid-Atlantic Challenge Matches, a team event vs. Virginia/Maryland in August.

“It’s always such a pleasure to play with Maria and we’ve played together for a long time,” said Schuster. “It was a great match. The course was in great shape and I want to thank the superintendent for keeping it in such good shape with the rain this week. I’m so excited to be the North Carolina Junior Girls’ Champion. It’s pretty cool!”

“The Carolinas Golf Association would like to thank the club members and staff of Wilson Country Club for hosting this event,” stated the release about the event. “The tournament would not be possible without their dedication and hard work. A special thank you to Josh Price, head golf professional, Reid Hill, general manager and golf course superintendent Craig Clemmer.”