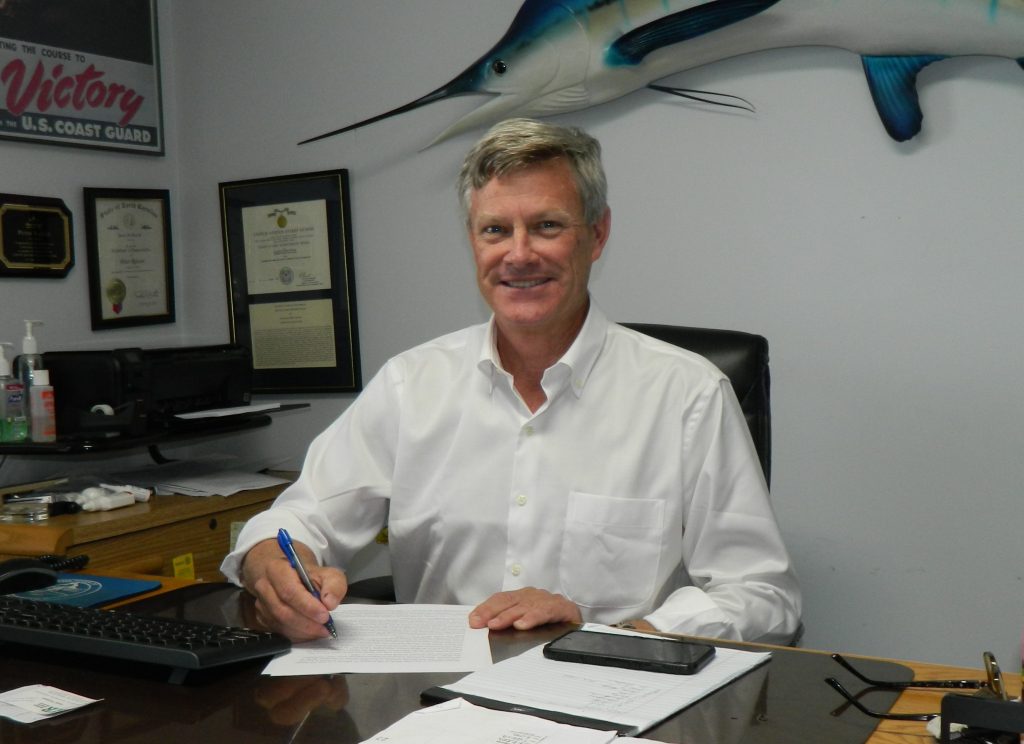 Southern Shores town manager Peter Rascoe has announced to The Coastland Times that he has given Southern Shores Council members formal notice of his intent to retire September 1.

A native of Bertie County, Rascoe’s public service career spans more than 30 years with several different state, county and municipal agencies. After securing an undergraduate degree at NC State University, Rascoe went on to earn his law degree from the University of South Carolina School of Law in 1982 and was admitted to the North Carolina State Bar that same year. After practicing law in Edenton for five years he moved to Raleigh, where he served as legal counsel to the North Carolina Property Tax Commission.

Following his Tax Commission work, Rascoe went to work in the Attorney General’s Office representing the Department of Environment, Health and Natural Resources.

In the mid 1990s Rascoe returned to eastern North Carolina and in 1999 began work as Chowan County’s staff attorney for special project officer until 2004, when he became the county attorney. In 2008, Rascoe was selected to be the Chowan County manager. He came to Southern Shores as town manager in June 2010.

“There were several things going on at the time,” said Rascoe. “It was in some ways a challenge because the everyday matters in Chowan County like housing, schools and those type things were not any part of Southern Shores operations. The issue here was maintaining quality of life. Getting used to that was a little bit of a challenge.”
That’s not to say there were not other challenges as well.

Walking in the door, Rascoe was faced with 7.5 miles of canals that needed to be cleaned out.

It was a huge project for the town, but work was at a standstill due to an ongoing lawsuit between the contractor and the Town of Southern Shores.

“Basically I was there to oversee the completion of a canal dredging project,” explained Rascoe. “But talks were at a stalemate and the contractor had shut down. Nothing was getting done so I had to find another contractor.”

With help from the town attorney who represented the town in the lawsuit, Rascoe was able to coordinate a settlement and secure another contractor to dredge the canals.

With the canal project behind him, Rascoe then turned to another simmering issue.

In Southern Shores, the town does not own any assets of the fire department because it is a private corporation and operates separate from the town. That means the fire station and all the equipment in it belongs to the Southern Shores Volunteer Fire Department, and the two agencies contract for fire protection services.

The arrangement worked well for several years but in 2010 contract negotiations came to a standstill and the SSVFD sent a formal letter informing the town of its intention to terminate fire protection services.

“When I arrived there was a major miscue between the town and fire department,” explained Rascoe. “There was a less than professional relationship and that led to a lot of mistrust between the two. Nobody was talking with anybody.”

Working with both sides, Rascoe was able to help smooth things out, resolve some of the issues and re-establish a working relationship between the town and the fire department. Today both parties once again trust each other and the two organizations have established a working relationship. In addition, a new multi-year fire protection contract is in place and the town is funding a new fire station currently under construction.

Although it did not carry the life-threatening impact that the fire department issue did, Rascoe found that previous elected councils were authorizing street rebuilds one street at a time each year.

Originally founded as a resort in 1946, the Town of Southern Shores was chartered as a municipality in 1979 and every street in town was developer-built, and in many cases they were substandard.

Working with different mayors and the different councils, it took Rascoe years to streamline the process for capitol street improvement projects. Now streets slated to be rebuilt are selected each year for the following year with council setting aside funding for a certain group.

And what were the worst times for Southern Shores?

“Natural disasters,” offered Rascoe. “We were successful in recovering from them, but those were the most trying times because they involved personal property losses.”

Rascoe said along the way he did have a few high points in his career.

Among them was serving in the mid 1990s as eastern North Carolina regional director for the non-profit Historic Preservation Foundation of North Carolina. Their goal was to preserve structures of historic significance. With the assistance of Town of Nags Head Mayor Bob Muller, Rascoe put together historic cottage tours in Nags Head that lasted six years, with every home in the historic district in Nags Head on a tour in at least one of those six years.

“No way we could do that today,” added Rascoe. “And some of them are now gone.”

Another significant appointment was by both the NC House and the NC Senate for two terms as one of two trustees to represent northeastern North Carolina on the NC Clean Water Management Trust Fund.

So what’s in the future?

Rascoe said there were no immediate, specific plans, but travel will likely be high on the itinerary list.

Although he retired from the US Coast Guard Reserve in 2013 as a full Commander with 30 years of service, Rascoe said as a deputy historian for the Fifth District, he enjoyed traveling all over the country interviewing aging veterans and helping start the Coast Guard’s oral history program.

More free time also equates to more time with family. His oldest daughter just graduated from the University of South Carolina with a business degree and moved to the western end of North Carolina, and his youngest is a rising junior at NC State University.

Using available leave time, Rascoe said his last day in the office will be August 16.