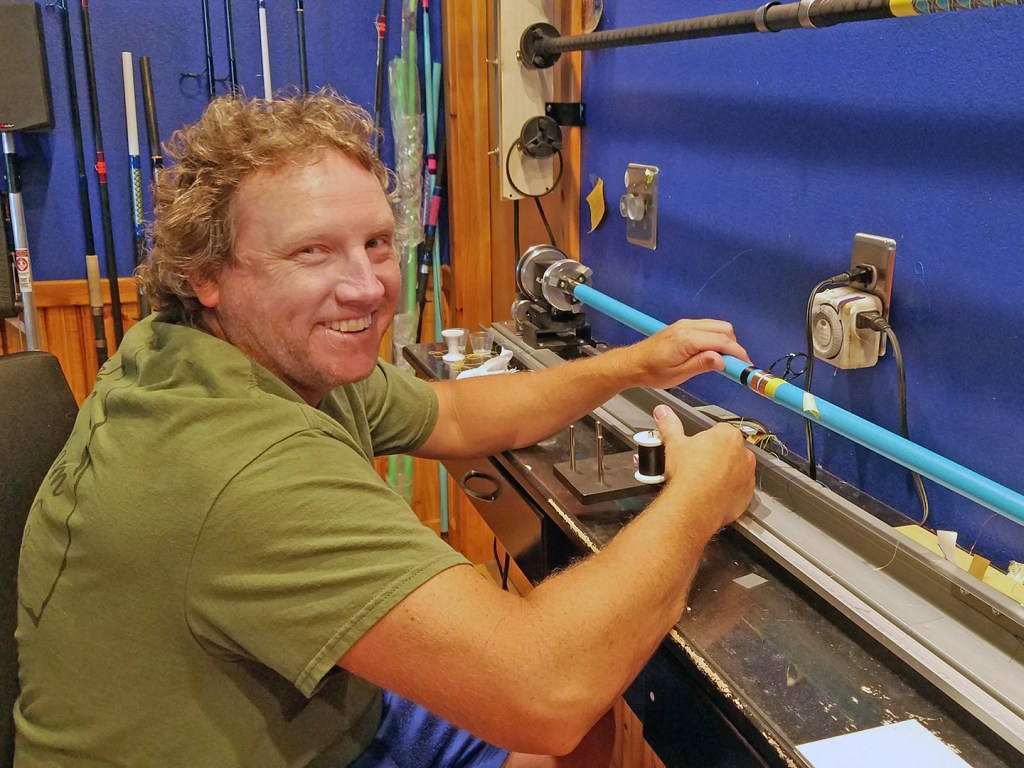 Nick Walke works on a custom rod at his home in Kill Devil Hills. He says he builds between 100 to 200 rods a year and most of them are long, heavy duty ones for drum fishing. Daryl Law photo

For two decades, there’s always been a friendly face front and center behind the main counter at T.W.’s Bait & Tackle in Nags Head. His name is Nick Walke.

He’s been there for 22 years and counting. A big smile says he’s happy at his post helping anglers of all levels with a wide variety of fishing questions – I’m sure he’s heard them all.

With a lot of fishing experience, Nick truly is knowledgeable about many aspects of the sport although he claims he’s “too busy” to fish much these days. That’s because his side job is slowly becoming his main job.

Business at Nick’s Custom Rods has him hopping this time of year, getting dozens of orders ready for drum season this fall. The other day, I stopped by his home in First Flight Village to check it all out.

Inside a large addition to his one level home, Nick was seated at his workstation putting thread over a guide on a rod blank with his dog Waylon at his feet.

A female vocalist sang soothing alternative country songs that flowed from his stereo located in a corner entertainment stand where there was also a large flat screen television.

Nick said he likes country music, the old stuff too such as Waylon Jennings and Willie Nelson, but he’s not too much on regular TV shows.

“I don’t watch TV, I haven’t watched it since football season,” he said, “No Direct TV, no cable, none, I just turned it all off. There ain’t much else to it.” 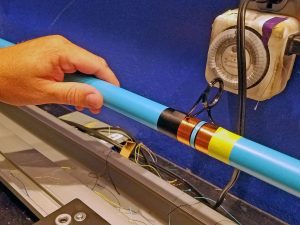 This black thread was spun onto the rod, it gets covered with epoxy later in the process. Daryl Law photo

Instead, Nick creates beautiful custom fishing rods from blanks by St. Croix and CTS. Although he specializes in the 13-foot-long heavy rods for big red drum fishing, he also makes other types of rods, too, including boat rods and trout rods.

He has dozens of bright color threads he uses and can spin them onto the line guides with help from a small motorized wall-mounted electric roller with brackets by Flex Coat.

While I was there, several rods were rotating horizontally, and the smell of the two-part epoxy he puts over the thread wrapping filled the air along with the music. Nick was truly in his element and seemed a little more at ease than he is at the extremely busy checkout counter at work.

Although he can build multiple rods at one time – and sometimes does just that if it’s a set of matching rods for a boat owner – he prefers to go at different pace. “I like building one rod at a time,” he said. 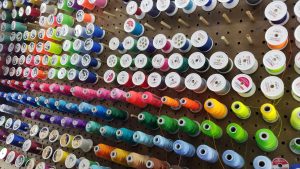 Nick Walke uses dozens of colorful threads when making rods. “I like colors and people like bright stuff.” He can also make all sorts of neat designs. Daryl Law photo

Hanging proudly above the central workstation are 14 framed citations for everything from red drum to a billfish. Nick said they are “just the biggest” ones he’s caught and that he replaces them if he catches a larger one in the same species. Highlights include a 15-pound sheepshead, 9-pound flounder and three cobias in the 90-pound range.

From time to time, he posts excellent photos of super catches he makes on days off. Many are red drum, but one summer Nick managed to catch a nice big dolphin fish from the surf on Hatteras Island.

He said social media, especially Facebook, has helped grow his business. Nick still builds rods for T.W.’s, but he did recently cut back to four days a week there so he can concentrate on building more custom rods. He has a logo, T-shirts for sale and a great reputation.

But there’s another side of Nick that makes him an even more valued employee for Terry and Robin Stewart. When the finger mullet show up in the fall, Nick finds and catches them in his cast nets just in time for the fall fishing rush.

At tournament time, dozens of surf fishing teams depend on T.W.’s fresh mullet and Nick supplies it. He’s gone out on the beach to catch mullet so many times that the other day, he posted a photo of his back bumper that had fallen off his truck thanks to rust! 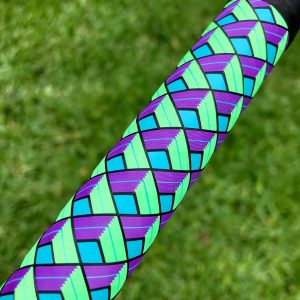 Nick Walke made this elaborate pattern on a rod he’s donating to the annual Jim Mulford Memorial Red Drum Tournament on Sept. 28 at Jennette’s Pier in Nags Head. Walke said he grew up next door to the Mulfords in Kill Devil Hills. Daryl Law photo

“I usually sell them to T.W.’s – they take all I can catch,” he said. “It was ten thousand pounds in one year, well in three months . . . first of September to end of November.

“That’s not bad for one person, all from the beach,” Nick said. “I wore out my bumper.”

He said he learned all about fishing first from his grandfather and then from his dad. After moving to Kill Devil Hills when he was young, he’s lived in the same neighborhood, First Flight, ever since.

In fact, he learned his fishing, crabbing and other skills in nearby Buzzard’s Bay and the canal that runs through the neighborhood behind Canal Drive. It used to be nice clear water, now it’s not, he noted.

The 44-year-old says he’s worked half his life “in tackle” at T.W.’s, which tells me it makes him happy to help folks have a little Fishin’ Fun.