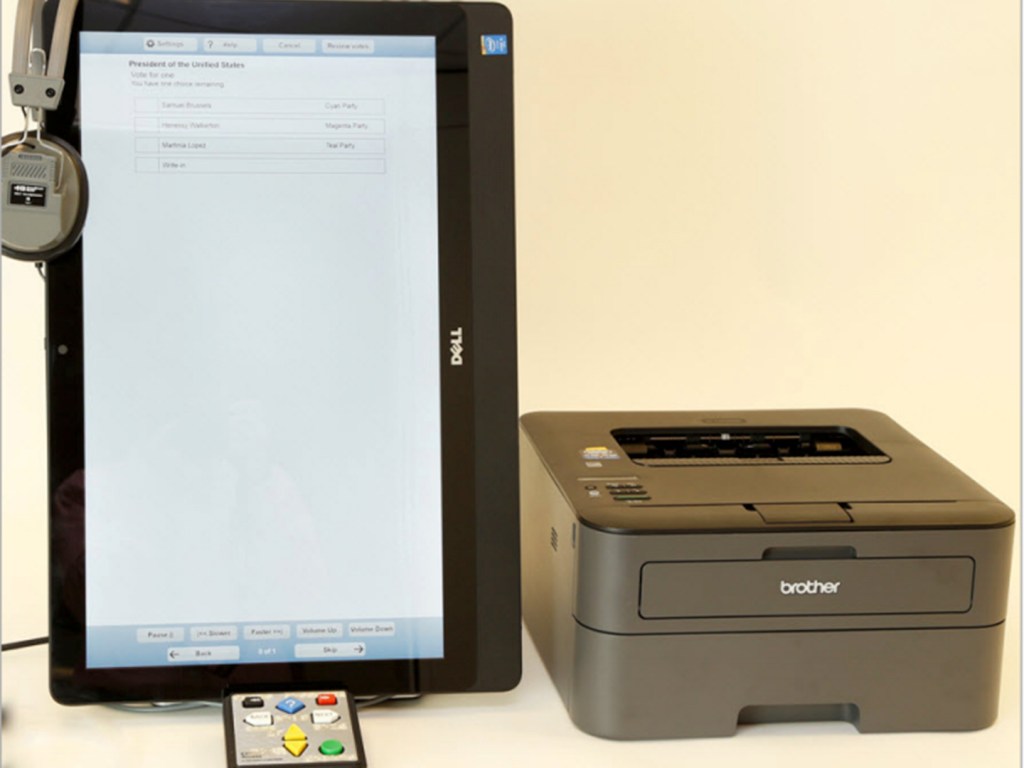 An example of a ClearAccess setup, part of the system from Clear Ballot.

The state elections board declined Thursday to decide whether the next generation of voting machines should be required to furnish a paper printout so voters can read and confirm their ballots.

One-third of North Carolina’s 100 counties must replace their current touch-screen voting machines after this year’s elections. The counties buy the machines, but only from those vendors approved by the state elections board.

A decision shaping how ballots will be cast and counted for years to come could come at the board’s Aug. 23 meeting.

Some voters, supported by elections board member Stella Anderson, want to add a new requirement that ballot machines “produce human readable marks on a paper ballot” allowing voters to confirm their “intent as evidence by the mark on the ballot.”

That’s in line with recommendations from a study released last year by the combined National Academies of Science, Engineering and Medicine.

The committee found that “the most significant threat to the American elections system was coming, not from faulty or outdated technologies, but from efforts to undermine the credibility of election results,” the report said. “Unsubstantiated claims about election outcomes fanned by social and other media threaten civic stability.”

At least two of the three companies being considered by the elections board — Clear Ballot of Boston and Hart InterCivic of Austin, Texas — seem to meet Anderson’s proposed new requirement. Equipment marketed by Omaha, Nebraska-based Election Systems & Software also prints a paper copy allowing voters to confirm their choices, but what tabulating machines actually read off the ballot are bar codes.

The state elections board heard during a hearing last weekend and through other contacts that some voters want a requirement for new machines to count what humans can see, not bar codes.

“I think that it is right to suggest a rule says that the thing the voter is verifying is not a pony show. That is the vote,” said Josh Lawson, until three months ago the state board’s top lawyer. “It shouldn’t be that someone selects it, presses verify on the screen, it prints, and they even look at it. They’ve done everything right. But never have they been able to audit what their actual vote is. Because their actual vote is that bar code.”

The U.S. Senate Intelligence committee last week released a report concluding all 50 states were targeted by foreign adversaries in 2016 and that “top election vulnerabilities remained” ahead of last year’s election. Special Counsel Robert Mueller warned during a congressional hearing last month that Russian election interference was ongoing even today.

It’s not clear when Gov. Roy Cooper will appoint a new member to the five-member elections board, where Democrats like the governor hold a majority.

Former board chairman Robert Cordle, a Democrat, resigned Tuesday, one day after telling an off-color joke at a statewide gathering of election officials. Cordle had favored approving some or all of the voting machine vendors without adding the requirement that their equipment produce “human-readable” paper records.