Months of hard work by talented, caring people culminated in two extraordinary day camps for exceptional children held at Jennette’s Pier during the past two weeks.

Leading the way was Kim McGee, a summer education instructor at the pier who also works with special needs children at First Flight Middle School in Kill Devil Hills.

Her outgoing nature and energetic personality make her the perfect person to launch and lead Jennette’s new Exceptional Summer Day Camp. All the students’ scholarships were funded by the pier’s Lilly Scholarship Fund, McGee said.

The children all seemed to enjoy their days at the pier riding waves, savoring “beach time,” bottom fishing, eating pizza in the air conditioning and making crafts. 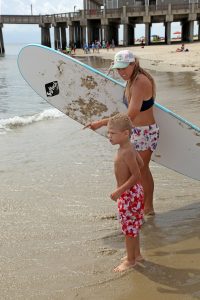 “We give them educational and physical opportunities to learn and gain experience,” McGee said. “They’re integrated into community summer programs.”

After so much planning and coordination to pull it together, she was ready to get the first of two day-long camps started.

“I’m so excited – I just hope to see a positive good time,” McGee said. “Some are happy building a sandcastle, some may enjoy catching their first fish!

“Others may just enjoy sitting and watching,” she continued. “And we like to end [the day] with a craft because they love to craft.”

During the two camps, the kids really did have fun getting wet and sandy while riding body boards to the beach, especially David. Then they dropped their lines over the rail in hopes of catching a fish.

At one point during the first camp in late July, an impromptu dance party broke out under the shade shack when Diamond and Brown sang and danced to an old Michael Jackson song.

McGee and the other pier instructors also had fun and the children certainly seemed to enjoy themselves. All the campers’ scholarships were paid with money earned from last spring’s third annual Taco Cook-off in Manteo.

McGee also added a unique element to the cook-off when she offered pony rides for a small fee. That money was also donated to the Lilly fund.

Lilly’s family, supported by the pier’s education team and Tamara Hughes from the N.C. Aquarium Society, have held the spring event three times now in memory of former camper Lilly, who died unexpectedly at a young age.

Dozens of underserved children from across the region who otherwise wouldn’t able to attend the pier’s weeklong adventure camps have enjoyed those, too, thanks to the Lilly scholarships.

McGee, who got her start helping exceptional children through Zumba classes at the Outer Banks Family YMCA in Nags Head, has performed well at First Flight Middle School, where she was named Employee of the Year 2018-19.

She also shares her love of horses with these special children. A North Carolina certified coach for the Equine Special Olympics, she’s helped children from Dare, Currituck and Camden counties practice and compete in these events, which are held in Raleigh.

She says riding offers a therapeutic outlet for the children in several ways. All the practices are held at the Mane & Taill Therapeutic Horsemanship Academy in Jarvisburg. McGee met the owners through her classes at the “Y.”

“It’s a joy to be part of the special needs world and to give to them!” she said.