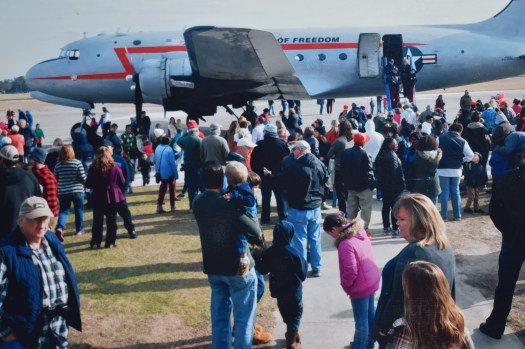 Attendees at a past Candy Bomber event gathered to get a closer look at the Spirit of Freedom. Courtesy Karin Edmond 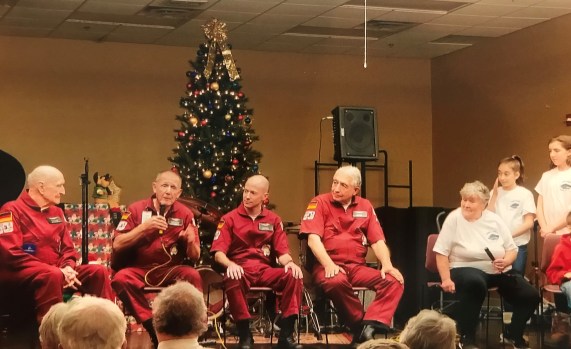 Lt. Col. Halverson alongside his fellow crew members to speak at a prior event on their experiences during World War II. Courtesy Karin Edmond 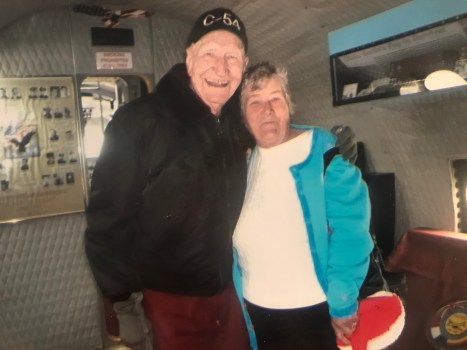 The 21st Annual Candy Drop will take place this coming Sunday, Dec. 15. Thanks to Karin Edmond and the Dare County Airport, there will be four days of events with the Spirit of Freedom and the Candy Bomber Crew.

Edmond grew up in Berlin, Germany during World War II. As the war progressed, fresh food became more expensive and harder to come by. The people of Berlin had to live off of dehydrated food items instead.

To help feed the residents of Berlin, American, English and French pilots and their crews started to conduct airlifts that would drop food down to the city. Their efforts fed more than two million people.

Young Lt. Gail Halvorsen was a big part of these efforts. He saw how the children of West Berlin – Edmond being one of them – were living on 750 calories per day. He would send candy down from his “wiggling” plane to children of all ages.

This flight of kindness brought with it attention from the media. Soon after these trips started, public support grew and donations started to pour in. By the end of the airlift, twenty-four planes were able to drop 23 tons of candy down to Berlin.

“I had never told my kids anything about what my childhood was like,” Edmond said, “until the airplane arrived 1990 in Manteo. That airplane meant freedom and survival.”

Seventy-one years after the original candy drops, Halvorsen still returns to Manteo to reenact the famous 1948/1949 Candy Drop with the original Douglas C-54 Spirit of Freedom.

“Col. Halverson is what us children called a hero,” Edmonds said. “He spread a little bit of sunshine with the other pilots to us children.”

Airport manager David Daniels confirmed that the Spirit of Freedom had already arrived at the Dare County Airport last week. During the event on Sunday, pilot Timothy Chopp, founder and president of the Berlin Airlift Historical Foundation, do the flyover for the reenactment. “He heads everything up for this,” Daniels said about Chopp.

Before the reenactment took place, Manteo Elementary school children were able to tour the plane on Friday. On Saturday, the Spirit of Freedom was open to the public. 99-year-old Halverson will be in town for the length of these events.

On Sunday, 700 candy-carrying parachutes will fall from the sky at the airport. For children six and under, the participation in the reenactment will be at 1 p.m. For those seven and older, the reenactment will take place at 1:30 p.m. At 2 p.m., Santa will be on board the Spirit of Freedom to take pictures and visit everyone in town.

In addition to the reenactment and festivities that will take place, on Tuesday, Dec. 17, Halverson and the Flight and Support Crews from the Berlin Aircraft will be honored at the 116th anniversary of the Wright Brothers’ first successful flight. Everyone is invited to attend this historic event.

Theatre of Dare tunes in ‘A Radio Christmas’ from 1944