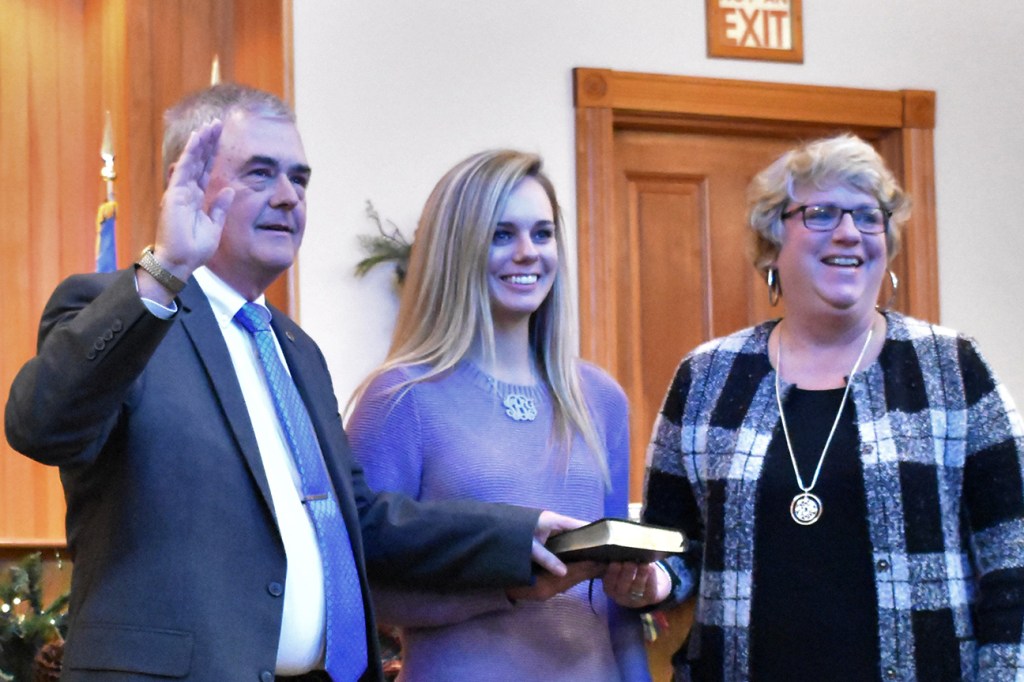 Mayor Pro Tem Craig Garriss took his oath of office with his daughter, Samantha Garriss Brown, and his wife, Karen Garriss, by his side. Danielle Puleo photo

Kitty Hawk town council members met at Town Hall on Dec. 2 to welcome their new and returning council-elects to the board.

Lynne McClean joined the board for another four-year term. “It was an exciting four years, we accomplished a lot of things,” she said. “I’m looking forward to working with David and the rest of my fellow councilmen and seeing what we can do in the next four years.” Craig Garriss, Mayor Pro Tem, said to McClean, “I can’t believe you wanted to do it again, but I’m glad you did.” 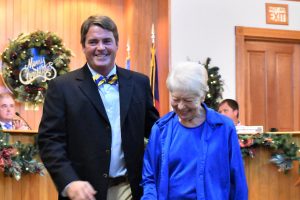 David Hines and Lynne McClean took their oaths and joined the council to serve for the next four years. Danielle Puleo photo

David Hines, the newest councilman, took his oath of office and sat with the board after the start of the meeting. He thanked Ervin Bateman, county commissioner, local businessman and former council member, for helping him get involved with the community.

Mayor Gary Perry welcomed McClean and Hines: “It is really important that people do step up and volunteer to be a member of the council; I look forward to working with all of you.”

Perry then nominated Garriss to be reelected as mayor pro tem. With no other nominations brought before the board, Garriss took his oath of office. “With Mayor Perry, we have a great council here. Again, I thank you for the nomination, I will do my best,” he said.

“Brian wears many hats,” Johnson said. Over the course of Johnson’s employment as police chief, Strickland has received over $300,000 in grants for radios, fire arms, equipment, body armor and much more for the police staff. He also handles their Facebook page, serves on local advisory boards and teaches at the police academy and the local community college.

“I have been here for a long time,” Strickland started, “I remember when Lynn swore me in.” Strickland said everyone in town was very welcoming and although things were different back then, he has seen changes for the good. “I think we’re moving in the right direction,” he said. 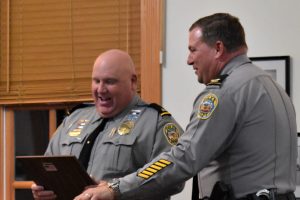 After Strickland received his service award, David Otts from NCDOT gave an update on the replacement of bridge #40 in Dare County.

He said the project was pushed back a year after Hurricane Florence hit the coast. “We are on a revised schedule now,” he said. The project began on Sept. 20 of this year and the contract allows for 210 days after the start to have the project completed.

Right now, Otts said the team has part of the old structure removed and they are working to have the concrete done by the end of December. In January, the new half of the bridge will start to come together and traffic will be moved to the new structure.

Town manager Andy Stewart discussed with the board another improvement that has been put on hold. “We had a little hiccup on elevation of bathhouse remodel,” he said. “We are looking to wait until the new FEMA maps are implemented, which will allow us to construct the bathhouse with the height that it is now.” Stewart said the hope is to complete the bathhouse remodel before it opens for the summer season. Currently, the parking lot is open to the public.

To close, Garriss and Perry commented on the recycling center located in Kitty Hawk. Garriss said, “I’ve been to the recycling center and I’ve never been treated so nicely.” Perry agreed it has taken a turn for the better: “The employees there are really keeping that clean.”

The next town council meeting is scheduled for Jan. 6 at 6 p.m. at Kitty Hawk Town Hall.