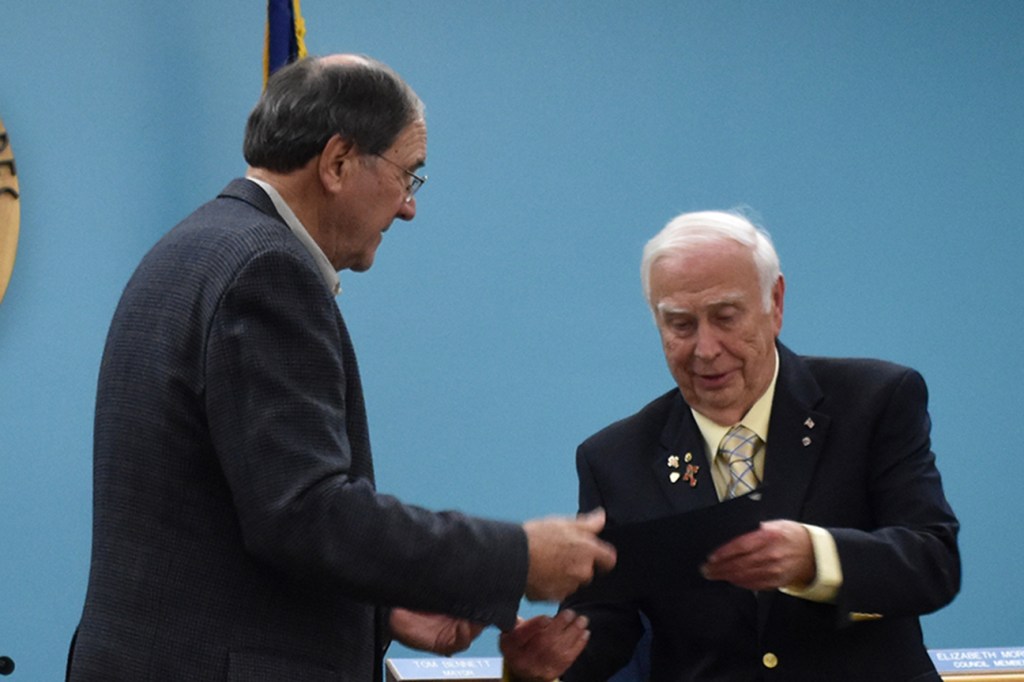 Leo Holland accepts an award from Mayor Tom Bennett, recognizing his service on the planning board. Danielle Puleo photo

On Dec. 3, the Southern Shores Town Council met at the Pitts Center to say goodbye to their outgoing members and welcome three incoming faces to the board.

To start, Fred Newberry and Chris Nason gave their well wishes to the new board members. “I wish the new council good luck and I’ll certainly support you all,” Newberry said. Nason followed that up by commenting, “There will be challenges, but I’m sure they’ll do great. Hopefully we left the town in a better place than when we came in and I’m sure they’ll do the same.”

Mayor Tom Bennett and councilman Jim Conners thanked Newberry, Nason and Gary McDonald (who was not present at the meeting) for their service. “The Town of Southern Shores is a town of volunteers,” Conners said. “They stepped up and volunteered and we thank you.”

As Newberry and Nason stepped down, Matt Neal, Elizabeth Morey and Leo Holland took their oaths of office and sat with Bennett and Conners. Bennett welcomed the new members: “I look forward to serving our town with you.” While Neal and Morey are new to the council, Holland served a term previously on the board starting in 2013. “I want to thank Chris, Fred and Gary for their efforts, I’ve been through that before so I understand,” he said. Holland added, “I’m looking forward to moving the town forward.”

Bennett then chose three candidates as nominees to serve on Dare County Tourism Board of Directors: Leo Holland, Elizabeth Morey and Jim Conners. The county will make the final decision on which candidate is chosen. Conners was also nominated to serve on the Dare County Gov-Ed Access Channel Committee. Neal was selected to join the Albemarle Rural Planning Organization (APRO). All positions are two-year appointments.

“The final motion I’d like to make is to ask Elizabeth Morey and Matt Neal to serve as council advisors to the Exploratory Committee to address cut-through traffic,” Bennett stated. The motion was approved by all.

After the board appointment portion of the agenda closed, Derek Dorazio from the US Census Bureau spoke on the importance of the upcoming 2020 census. “The 2020 census is three things,” he started, “important, easy and safe.”

Dorazio went on to say that the goal of the Census Bureau is to only conduct the study once. To help make this happen, the bureau has made history with their self-response survey that can now be completed online. You can visit www.census.gov to learn more about this online version of the 2020 census. The census can still be completed over the phone or by hand as well. 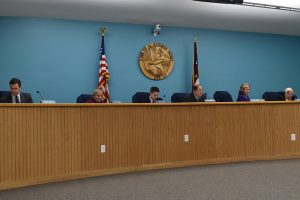 Dorazio said that in 2000, the response rate in Dare county was 37%. It jumped to 78% in 2010 and will hopefully increase this coming year with this new response system. Dorazio said the census now only conducts short-form surveys: “It’s ten questions, ten minutes, answer for your household and you’re done.”

After Dorazio’s presentation, Conners made a motion to adopt the 2020 census partnership. With no further discussion, the council moved to recognizing Holland for his service on the Planning Board. “The town expresses their gratitude for your service,” Bennett said.

Towards the end of the meeting, Bennett decided to table the Planning Board appointments until the January meeting to give the new council members time to make their final decisions on who should fill the roles.

The meeting ended with a closed session to consult with town attorney Ben Gallop in reference to preserving the attorney-client privilege between Gallop and the council.

The next town council meeting will be held on Jan. 21 at 5:30 p.m. at the Pitts Center in Southern Shores.