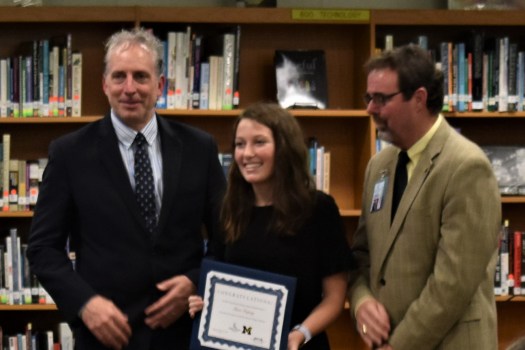 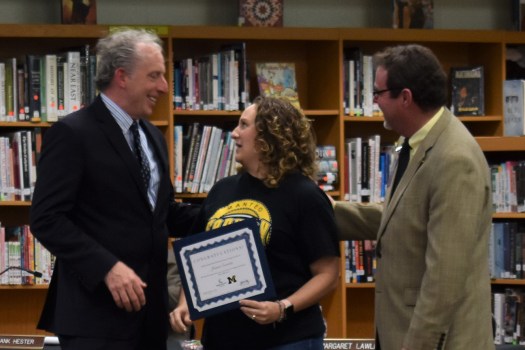 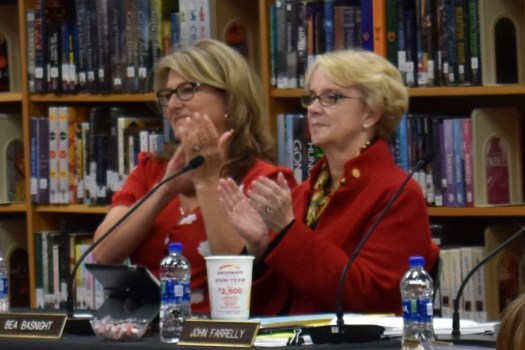 Chair Bea Basnight and Vice-Chair Mary Ellon Balance congratulate the teachers and students of MHS that were recognized during the board of education meeting. Danielle Puleo photo 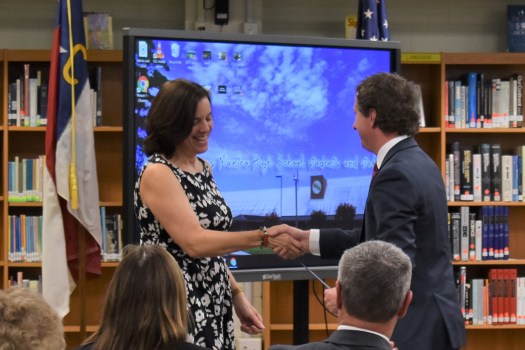 During the announcements portion of the agenda during the Dec. 10 Dare County Board of Education meeting, Superintendent John Farrelly said that the board will be taking on a commission to look into teacher supplements.

Farrelly said this commission will work together to study the topic and present their findings to the Dare County Board of Commissioners. “Our teachers deserve the best and they deserve as much support as we can provide them,” he said during the meeting.

The group will consist of at least two teachers from each of the Dare schools. According to Keith Parker, digital communications director, the commission is still in the process of being formed. Each principal has sent in a list of names of teachers to serve on the commission and they will be chosen within the coming weeks.

Teacher supplements come from funds from the county commissioners and are very competitive, according to Farrelly. He said after researching the topic with the new group, there will be a “significant amount of money” being asked for. “If we increased every teacher’s supplement by $200, that’s about $100,000 that would have to be funded locally,” he said.

Despite the large amount of time that will have to go into studying this topic, Farrelly assured it would be a “worthwhile venture.”

The group is scheduled to conduct its first meeting in January. Farrelly estimates research will go on for a period of about ten months before the group can present their findings to the Board of Commissioners.

Jessica Everett was awarded MHS Employee of the Year award and MHS Teacher of the Year was given to Raleigh Hudock. Lisa Serfling was recognized for the highest growth score, becoming a National Geographic Certified Educator and receiving a grant from the Dare Education Foundation.

Once the recognition portion of the agenda finished, Arty Tillett, assistant superintendent, introduced an online software program called “No Red Ink” that DCS have been using in their English classes.

“This program provides quality instruction, skill development, feedback and practice,” Tillett said. Kassandra Mount, MHS English Department chair, shared that “No Red Ink” has provided “high quality grammar instruction and practice that the students needed.” After purchasing the premium licenses for “No Red Ink” to be used in all Dare County high schools, skill reinforcement when it comes to writing has improved.

“I feel very proud when I use ‘No Red Ink’ because I know that I am giving them the best platform that is going to reach them and engage them, and it is so highly affective,” Mount said. Four MHS students then walked the board through the program, touching on its four key features: individualization, differentiation, rigor and immediate feedback.

The board noted how glad they were to hear that students were getting the writing tools they need to succeed. “Systemically in North Carolina, there has been such an emphasis on reading in the last twenty years that we have really lost parts of writing,” Farrelly said. “This is really speaking to the heart of one of the things that we really want to hone in and work on.”

During the last portion of the meeting, the board and attorney Richard Schwartz discussed how they would fill their recently vacated seat on the board. Ben Sproul, newly elected mayor of Kill Devil Hills, resigned from the Board of Education to pursue his new leadership role.

Schwartz presented several options for how the board could go about filling the vacant seat, ranging from simple to more elaborate processes. Ultimately, the board chose a simpler method, similar to how Wilson County filled their Board of Education vacancies: an advertisement for a non-partisan seat, including a one-page application of general information and authorization for a background check.

Citizens that are interested in the position must live in District 2. The application can be found on Dare County Schools homepage: www.daretolearn.org.