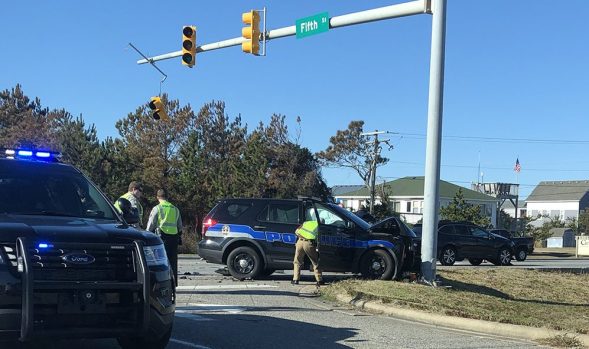 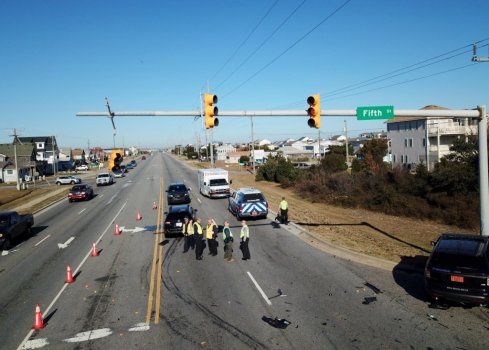 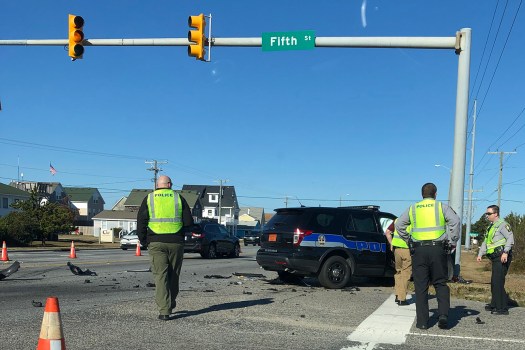 “It is standard policy for our agency to ask an outside agency to conduct an independent investigation of circumstances surrounding any serious collision,” stated a KDHPD press release.

Trooper D. W. Weaver with the NC Highway Patrol reported that Karen Collins, 43, of Kill Devil Hills, was driving a 2018 Subaru SUV traveling southbound on US Highway 158. Collins had entered the center turning lane and was stopped to make a left turn onto E. 5th Street.

At this time, KDH Police Officer D. Y. Gnafakis, who was driving a 2015 Ford SUV police vehicle, was on the inside lane of U.S. Highway 158 heading northbound. 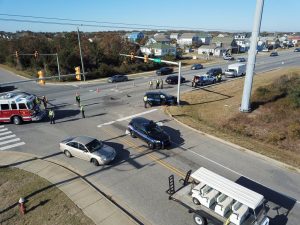 Gnafakis entered the intersection when Collins failed to yield. Collins struck the left front quarter panel of Gnafakis’ vehicle, according to Weaver. Collins’s vehicle was deflected from the impact and came to rest in the center of Hwy. 158.

Gnafakis was deflected to the right and struck a DMV traffic light pole head-on, according to Weaver.

Both the officer and the driver of the private vehicle went to The Outer Banks Hospital for medical evaluation. According to KDHPD, the officer, who has been released, was wearing her seatbelt, her ballistic vest and there was an airbag deployment. “She has some of the expected bruising from a vehicle crash, but no serious injury,” stated the release.

Weaver said Collins has been treated and released from the hospital. She is being charged with unsafe movement due to a failure to yield in the right-of-way.

Crews were called in to restore the traffic signal at US 158 and 5th Street, which was not functioning due to the collision.

The Kill Devil Hills Police Department expressed thanks to the Dare County Sheriff’s Office, Dare County EMS and KDH Fire Department for assisting at the scene as well as Dare County telecommunicators who helped coordinate the response and rescue efforts.