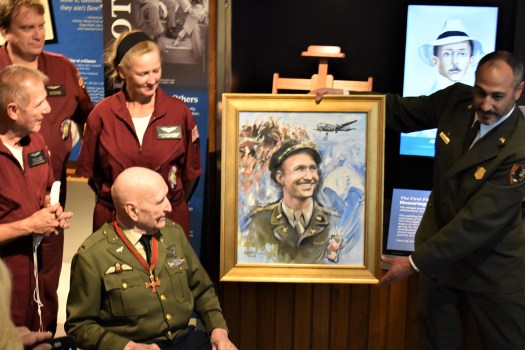 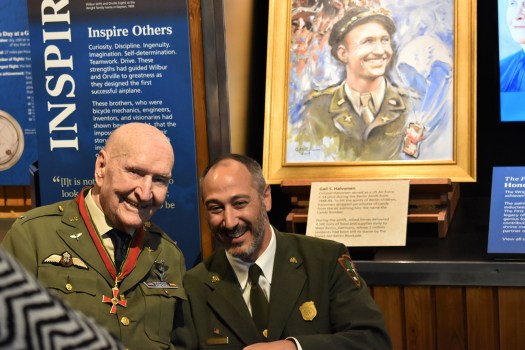 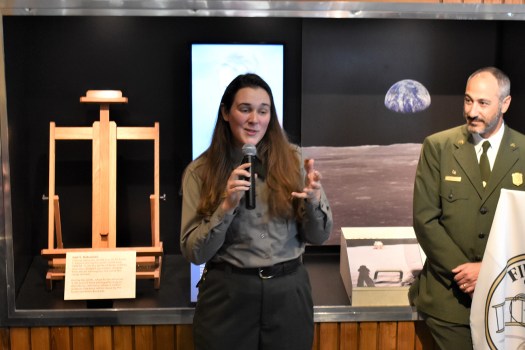 December 17 marked the 116th anniversary of the day flight was born. Since then, aviation has taken off and grown to new heights with each passing year. Along with flight itself, the pilots behind the planes have served as heroes in their own right.

The First Flight Society’s tradition of having a hand-painted portrait of each aviation honoree brought to the shrine located in the visitors center of the Wright Brothers National Memorial continued this year with Col. Gail Halvorsen, a C54 pilot during the Berlin Airlift.

Ashley Dickerson, a ranger with the National Park Service, introduced Halvorsen and spoke about this special tradition during the portrait reveal: “The purpose of First Flight shrine is to have an opportunity to recognize people in the aviator community who have done wonderful and amazing things.”

Following World War II, Berlin itself was divided. “For the Soviets, they would rather not have Allied forces in the middle of their territory, so they tried to block off any routes to try and force them to leave,” Dickerson explained. Therefore, the people of West Berlin suffered from a lack of food and supplies.

“This began the 15-month process of delivering food and supplies to two million people in West Berlin,” Dickerson added. Halvorsen was a part of these efforts.

Dickerson said, “When people speak about the Berlin Airlift, typically there is one person that they think about and that is the Candy Bomber.” Halvorsen had met some children during this time period and wanted to give them something that would life their spirits, so he decided to drop candy. This resonated with people around the world.

“We are so lucky to be able to recognize Col. Gail Halvorsen as part of our First Flight Society,” Dickerson said right before the portrait was revealed.

David Hallac, superintendent of the National Parks of Eastern North Carolina, said this particular inductee was a “unique” one. “I think his [Halvorsen] role in history was so much more than just aviation – it was about passion; it was about giving and kindness,” he said.

Halvorsen was thankful that people had come out to witness his recognition and support his enormous efforts. “It’s an honor to me to represent those who gave their lives for freedom,” he said. Halvorsen noted that those who were killed during the war were a testament to human nature and the willingness to sacrifice oneself for the betterment of the world.

The portrait of Halvorsen is now on display at the visitors center at the Wright Brothers National Memorial.